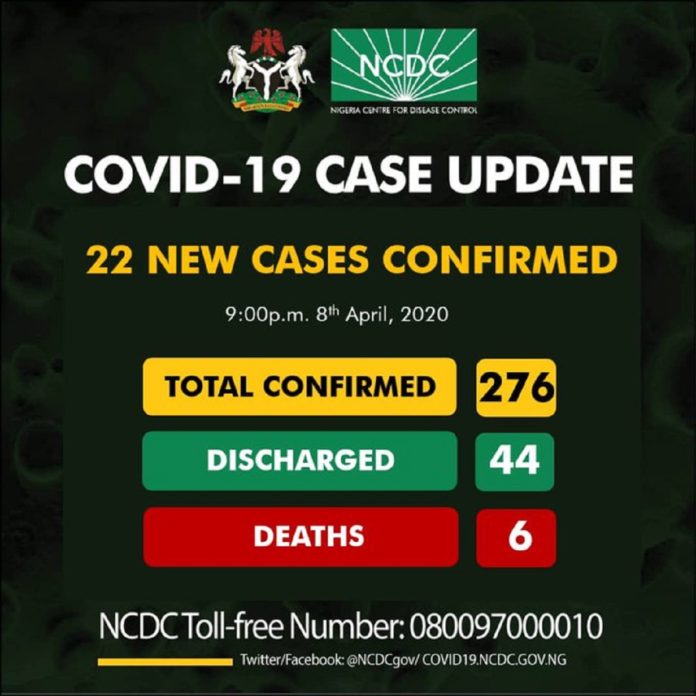 The Nigeria Centre for Disease Control (NCDC) has confirmed 22 new cases of coronavirus in the country, bring the total number of cases to 276.

NCDC, through its verified Twitter account on Tuesday night, said that the 22 new cases were from four states – Lagos, 15; FCT, four ; Bauchi, two, and  Edo, one.

It said that 44 had been discharged and six died.

The News Agency of Nigeria (NAN) reports that Lagos remains the epicentre with 145 cases, and FCT follows with 54 cases, and Osun, 20, and Edo, 12.

According to NCDC,  there are 11 cases in Oyo, eight in Bauchi, five each in Akwa Ibom and Kaduna, four in Ogun, two each in Enugu, Ekiti, Kwara and Rivers, and one each in Benue, Delta, Katsina and Ondo.

The spike in Osun was linked to the arrival of Nigerians  from ECOWAS countries.

Several groups of Nigerians have made known  their intentions to return home.

Of the  44 COVID-19 patients discharged so far, seven are from the University of Abuja Teaching Hospital.