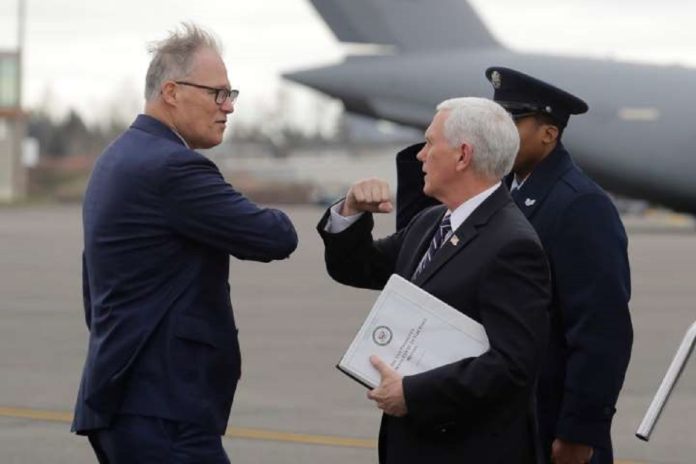 Pence, who is leading the Trump administration’s response to the coronavirus, was greeted by Washington State Gov. Jay Inslee on the tarmac shortly after Air Force Two landed in Tacoma on Thursday.

Inslee, a Democrat, extended an elbow to Pence rather than a hand. The vice president reciprocated and proceeded to elbow bump everyone else waiting in line to greet him.

The vice president is in Washington for a series of meetings about coronavirus, which has hit the state particularly hard.

Elbow bumps have gained in popularity since the coronavirus began to spread as a way of expressing a greeting without exchanging germs. But the trend is only now catching on in Washington.

Asked about the state of the Democratic race for president, House Speaker Nancy Pelosi amended a previous comment on how Democrats will “madly embrace the nominee.”

“This week, I say we will madly elbow bump,” she joked.

President Donald Trump, a self-acknowledged germophobe, has repeatedly been asked whether he is personally changing routines because of the virus. At a Fox News town hall on Thursday he said there was no way for a politician to refuse to shake the hands of supporters.

“You can’t be a politician without shaking hands,” Trump said.