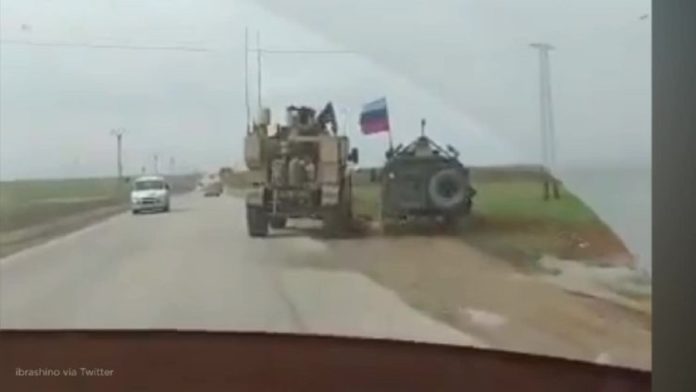 A video circulating on Twitter shows US military forces in Syria running a Russian military vehicle off the road.

The footage appears to be from inside of a civilian vehicle. The driver is riding alongside a convoy of military vehicles primarily flying Russian flags. At the head of the line are a pair of American vehicles, an M-ATV mine-resistant vehicle, sometimes called an MRAP, and an MRAP truck.

The crisis in Syria is reaching catastrophic levels as hundreds of thousands are fleeing one dangerous situation to enter another.

The Tigr successfully wedges itself between the American vehicles and attempts to overtake the lead car, but the US vehicle swerves to block its advance before ramming it off the road. A civilian bystander is nearly hit by the vehicles during the altercation.

There is no clear explanation in the video as to why the Russians were trying to get around the American vehicles, but it may have something to do with another incident that happened nearby and around the same time.

Wednesday, a stand-off at a checkpoint near the Syrian town of Qamishli between US troops and Syrian militia forces loyal to Syrian president Bashar Al Asad left one Syrian dead following a short gun battle. Russians were also present at the stand off, but did not intervene.

The Russian have been more prominent in the region since making an agreement with Turkey to patrol the area. The move comes as the Turkish government tries to drive US-backed Kurds out of the border region. Until recently, US and Kurdish control of the region was mostly uncontested.

Both the American and Russian forces at Qamishli are reported to have used vehicles matching those in the convoy video.

The video ends with the civilian car moving past the Russian and American military vehicles. What happens in the moments after the incident are still unknown.