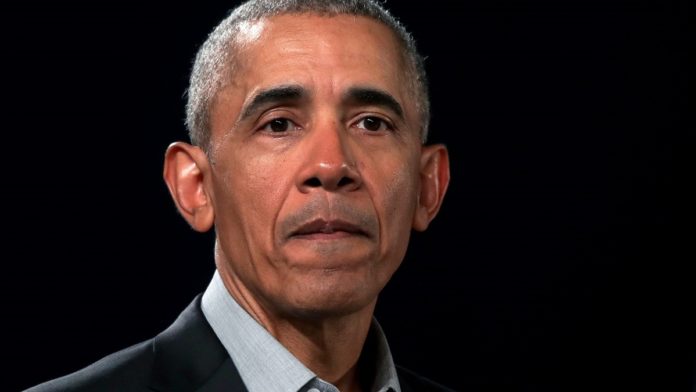 “Joe Biden promised to help our community. It was a lie. Here’s President Obama,” the ad begins, then continues to play an audio passage from Obama’s 1995 memoir, “Dreams from My Father,” to allude that Biden supports  “plantation politics” and describes how the black community had been wrongfully treated.

The ad simultaneously flashes headlines across the screen that knocked Biden’s history on race, and concludes: “Enough. Joe Biden won’t represent us, defend us, or help us. Don’t believe Biden’s empty promises.”

PolitiFact found that the audio is Obama reading a quotation from a barber about Chicago’s first black mayor, Harold Washington, where the man says, “Plantation politics. Black people in the worst jobs.The worst housing. Police brutality rampant. But when the so-called black committeemen came around election time, we’d all line up and vote the straight Democratic ticket. Sell our souls for a Christmas turkey.”

Our new ad playing in South Carolina: @JoeBiden joined segregationists, wrote a bill that disproportionately jailed African Americans, & blamed black parents for inequality. He will not represent us.853:12 AM – Feb 26, 2020Twitter Ads info and privacy90 people are talking about this

The ad comes from the Committee to Defend the President, and aired on local CBS affiliates in South Carolina before Tuesday night’s Democratic debate in Charleston. Obama’s office said his lawyers would be sending the PAC a cease-and-desist letter.

Obama spokeswoman Katie Hill told USA TODAY in a statement that, “[T]his despicable ad is straight out of the Republican disinformation playbook, and it’s clearly designed to suppress turnout among minority voters in South Carolina by taking President Obama’s voice out of context and twisting his words to mislead viewers.”

“In the interest of truth in advertising, we are calling on TV stations to take this ad down and stop playing into the hands of bad actors who seek to sow division and confusion among the electorate,” the statement continues.

Biden, who struggled in early primary and caucus states, is looking to South Carolina for help. He is counting on his support within the African American community to help him win the state.

Hill said that though Obama has many “friends” competing for the Democratic nomination, including Biden, he is is not endorsing anyone in the primary, “because he believes that in order for Democrats to be successful this fall, voters must choose their nominee.”

Biden campaign spokesperson Andrew Bates called the ad a “despicable torrent of misinformation” and said it shows that Trump “and his allies are absolutely terrified that Joe Biden will defeat him in November.”

This is not the first time a pro-Trump PAC has used the sound bite. Great America Alliance used the same bite in 2017 to inveigle black voters away from Democrats, targeting Georgia’s 6th Congressional District’s special election, according to the Washington Post.