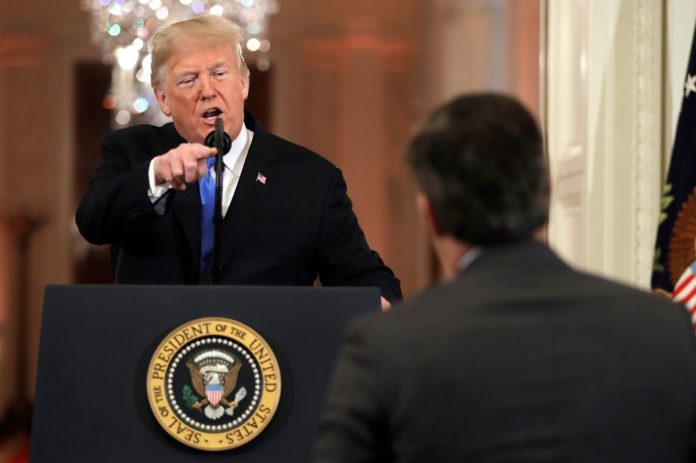 The fiery exchange saw Acosta tell Trump that CNN’s “record on delivering the truth is a lot better than yours sometimes, if you don’t mind me saying.”

Trump ― who, according to The Washington Post has told more than 16,000 lies since taking office ― hit back, telling Acosta that “your record is so bad you ought to be ashamed of yourself.”

“You probably have the worst record in the history of broadcasting,” continued the president, who has often targeted CNN and Acosta in his anti-media attacks.

Acosta replied: “I’m not ashamed of anything and our organization is not ashamed, Sir.”

The exchange began when Acosta rose to ask Trump whether he would reject foreign help in his reelection and how he justifies the appointment of an acting director of national intelligence who has no relevant experience.

Trump began his answer by saying he wants no foreign election help, but then abruptly swerved into an attack on CNN.

Check out the video here:

Holy shit this press conference is off the rails

This exchange with Jim Acosta was something else.3291:35 PM – Feb 25, 2020Twitter Ads info and privacy155 people are talking about this

Acosta and Trump have sparred on multiple previous occasions.

The White House revoked the journalist’s’ press pass in 2018 following a heated exchange that ended with an administration intern grabbing a microphone from him.