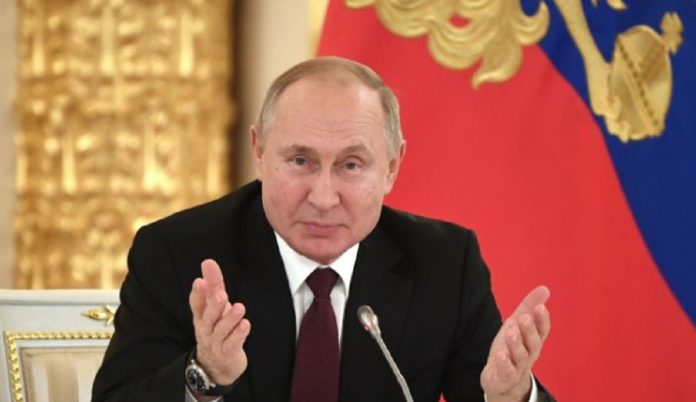 The Russian military on Friday said it had deployed a hypersonic weapon that flies at superfast speeds and can easily evade U.S. missile defense systems, potentially setting off a new chapter in the long arms race between the world’s preeminent nuclear powers.

U.S. officials said Friday they have little doubt that the Russians have a working hypersonic weapon — which sits on top of a modified missile and is capable of carrying a nuclear warhead at speeds faster than 3,800 mph.

Moscow has been working on the technology for years and has invested heavily in it, determined to reverse the pattern in the Cold War, when it was often struggling to catch up with U.S. nuclear weapons systems. If the new system, called “Avangard,” works as President Vladimir Putin of Russia boasted when he described the weapon a year ago, it would significantly enhance Moscow’s already powerful nuclear forces, U.S. officials said.

Hypersonic weapons can maneuver along unpredictable trajectories, making them incredibly difficult for current systems to track, much less shoot down. Senior U.S. military officials said the United States plans to deploy its own hypersonic weapons by 2022, but some experts believe that the schedule may prove optimistic.

Yet the Russian announcement may be as much about spurring a new round of diplomatic talks as it is about reviving an arms race, current and former diplomats said. Moscow is eager for President Donald Trump to renew the last remaining arms control treaty between the United States and Russia, called New START, which limits strategic nuclear missile launchers and deployed warheads for both nations. The treaty expires soon after the next presidential inauguration in 2021.

The Trump administration has been noncommittal about extending the treaty, and Trump has repeatedly said that he would renew it only if it includes China and other nuclear powers. China has said it is not interested in any numerical limits on its arsenal, which is one-fifth of the size of America’s and Russia’s.

Last month, Secretary of State Mike Pompeo declared that “the world has changed” in the decade since the Obama administration negotiated New START and that arms control treaties can no longer be limited “to the United States and Russia.”

By showcasing its new weapon, Russia could be trying to pressure Trump to open talks. Putin said earlier this week that Russia was ahead on hypersonic technology, reveling in a rare moment of superiority to American and Chinese technology. The Russian leader has been unafraid to use “nuclear diplomacy” in the past and Moscow has been designing new weapons that can threaten the United States.

Trump has at times called for starting a new arms race, saying that American technology would ultimately win. Yet while the U.S. military was once thought to be well ahead in hypersonic technology, the pace of development flagged in recent years.

“China and Russia made hypersonic weapons a national priority. We didn’t,” William Roper, the head of Air Force acquisitions and technology, said Friday. “Every service now has a major hypersonics program in a departmentwide effort to catch up.”

The U.S. Air Force has two hypersonic prototypes in testing and, while development is on an accelerated pace, the weapons are not scheduled to be operational until 2022. Other parts of the Pentagon, including the Defense Advanced Research Projects Agency, have other hypersonic initiatives, but they are many years down the road.

Still, experts say the threat to the United States appears limited. Russia’s system is being deployed in relatively low numbers, likely no more than a couple of dozen, according to Daryl Kimball, the executive director of the Arms Control Association. As a result, the system “does not significantly increase the threat to the United States and the world” of Russia’s already fearsome nuclear arsenal, Kimball said.

But he said the two countries should discuss hypersonics as part of any new negotiations.

“Washington and Moscow should immediately commence talks on how new weapons technologies and all types of nuclear weapons should be regulated so that neither side believes they can gain an advantage by ‘racing’ ahead of the other,” Kimball said.

The Russian weapon — known as a hypersonic glide vehicle — can fly lower in the atmosphere, avoiding ballistic missile defense radars. It is mounted on an intercontinental ballistic missile, allowing the warhead to be initially carried toward a target on a traditional piece of technology. But as it gets closer to the target, it flies at hypersonic speeds in an unpredictable path — making detection, tracking and interception extremely difficult. Most U.S. missile defenses work by predicting the path of an incoming weapon and shooting an “interceptor” at it.

On Friday, Russia’s defense minister, Sergei Shoigu, informed Putin that the first missile regiment armed with the glide vehicle was operational, the ministry said in a statement. The strategic missile forces chief, Gen. Sergei Karakayev, said at a meeting later in the day that the new missile was deployed with a military unit in the town of Yasny of the Orenburg region on the border with Kazakhstan.

The Pentagon declined to comment on the Russian statement, but other U.S. officials said there was no reason to doubt Moscow had deployed the new weapon.

Nothing in the existing arms treaty would prohibit the new Russian weapon from being mounted atop an intercontinental weapon. In November, before Friday’s deployment of the hypersonic weapon, the Russian military exhibited it for U.S. officials, as required under the treaty.

The weapons that Putin has tried to highlight in recent years have all been systems designed to reach the United States.

“The Russians are developing capabilities to reach out and attack us,” Brig. Gen. S. Clinton Hinote, a senior Air Force official, said in an interview this month, before the Russian technology was declared operational. “When you look at some of the capabilities Russia has announced, they are designed for offensive attack into the homeland of the United States.”

The Avangard project was among the few new Russian strategic weapons Putin unveiled during his State of the Union speech in March 2018. Putin boasted that the new weapon “flies to its target like a meteorite, like a ball of fire” and is “absolutely invulnerable to any air or missile defense system.”

Russia began looking at ways to improve the capabilities of its strategic missile force after the United States withdrew from the anti-ballistic missile treaty in 2002 in order to expand its missile defenses.

Russia has several other projects underway, including a long-range torpedo that could detonate a nuclear weapon on the American West Coast, and a nuclear-powered cruise missile. Neither would be covered by New START but development is still years away.

The new U.S. defense budget devotes significant funds to developing both new weapons and new defenses against hypersonic weapons. Progress has been cloaked in secrecy. But Lt. Col. Robert Carver, a Pentagon spokesman, said hypersonic weapons “remain a technical research and engineering priority” for the Pentagon.

Unlike the new Russian system, two Air Force prototypes are designed to be carried and released by aircraft, not launched atop ICBMs.

Roper said the Air Force is moving more aggressively than usual to test the prototypes in an effort to build new weapons faster. Even if the new prototypes work, he said, there can be no “sense of comfort” and warned that the United States will need to continue developing new hypersonic weapons “if we want to dominate this new domain of fast flight.”