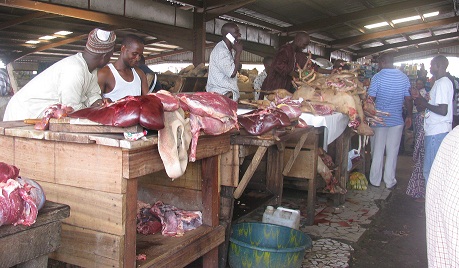 Lagos State Government today inaugurated a three-pronged strategy aimed at sanitizing the red meat value chain in the State in order to ensure the consumption of healthy and wholesome red meat in the State.

The State Commissioner for Agriculture, Prince Gbolahan Lawal who kicked off the pilot Ita Faji Market in Lagos Island noted that the State Government is committed to the sanitization of the Value Chain by embarking on three-pronged strategy with the acronym ATM;  Abattoir, Transportation and Market.

He noted that strategy was in conformity with Section 4 of the Cap M3 Meat Inspection Law of Lagos State and the 4th Schedule (Regulation 33) of the Law adding it would not only ensure the consumption of wholesome meat by the people but it would also facilitate export of red meat to other countries.

Lawal explained that it was important for the State Government to raise the standard of slaughtering, processing and marketing of red meat for hygienic reason and the need to bring the activities in the red meat value chain to international best practices particularly as the Government is committed to making Lagos State a 21st century economy.

“The three-strategy is to guarantee the safety and health of the populace by ensuring that only certified animals are slaughtered and wholesome beef is available in our markets. This will also boost the international recognition of beef from the State thus opening up an export portal which will be a source of foreign exchange to the State Government,” the Commissioner averred.

He wondered while some African countries like Botswana, Namibia, Ethiopia and Kenya could export meats to Europe, Saudi Arabia and other 3rd World countries and why Nigeria, a naturally endowed and big country, could not be able to do same.

“For instance, many African countries like Botswana, Namibia, Ethiopia and Kenya export meats to Europe, Saudi Arabia and other 3rd World countries. Indeed, Botswana alone exports about 9,000 tones of meat to Europe and 10,000tones to Saudi Arabia. Botswana alone enjoys unlimited preferential market access to the European Union, competing with meat exporting countries like Brazil. So, rather than only producing meat for local consumption, Botswana exports meat that is hygienically tested and proven to meet the European market standard.

“In the same vein, Namibia also exports meats to about 18 European countries and China. It meat exports industry is quite lucrative and a sure revenue generator for the country. The question is: how did our brother African countries are able to do this while naturally endowed and big country like Nigeria is not able to do this?

“The answer is solely because of the reforms they have been able to carry out in their red meat value chains which enable their red meat to meet the international standard,” he said.

He stressed that series of engagements were held with critical stakeholders like the Butchers Association in the State, Market women and men, concessionaires and franchises among others whose support and cooperation are germane to the successful implementation of the reforms exercise in order to ensure the success of these reforms.

“Let reiterate that the main objective of this reform is to promote wholesome and hygienically processed beef for the populace. From the handling of these animals up to the processing stage where they are taken to the market for sale, proper care and attention must be ensured in order to achieve the goals of the State Government to produce healthy meat for consumption and export,” the Commissioner pointed out.

“Changing the red meat value chain is a collective effort hence all hands must be on deck to revamp the sector. The progress of the industry lies in our hands, let’s all do our part to ensure only wholesome beef is sold to the populace. The export potential for beef is very huge and tapping into the multi-billion dollar market will only be possible with these reforms,” Lawal noted.

Farmers encroach on 138,000 hectares of forest reserves in Ondo – Akeredolu