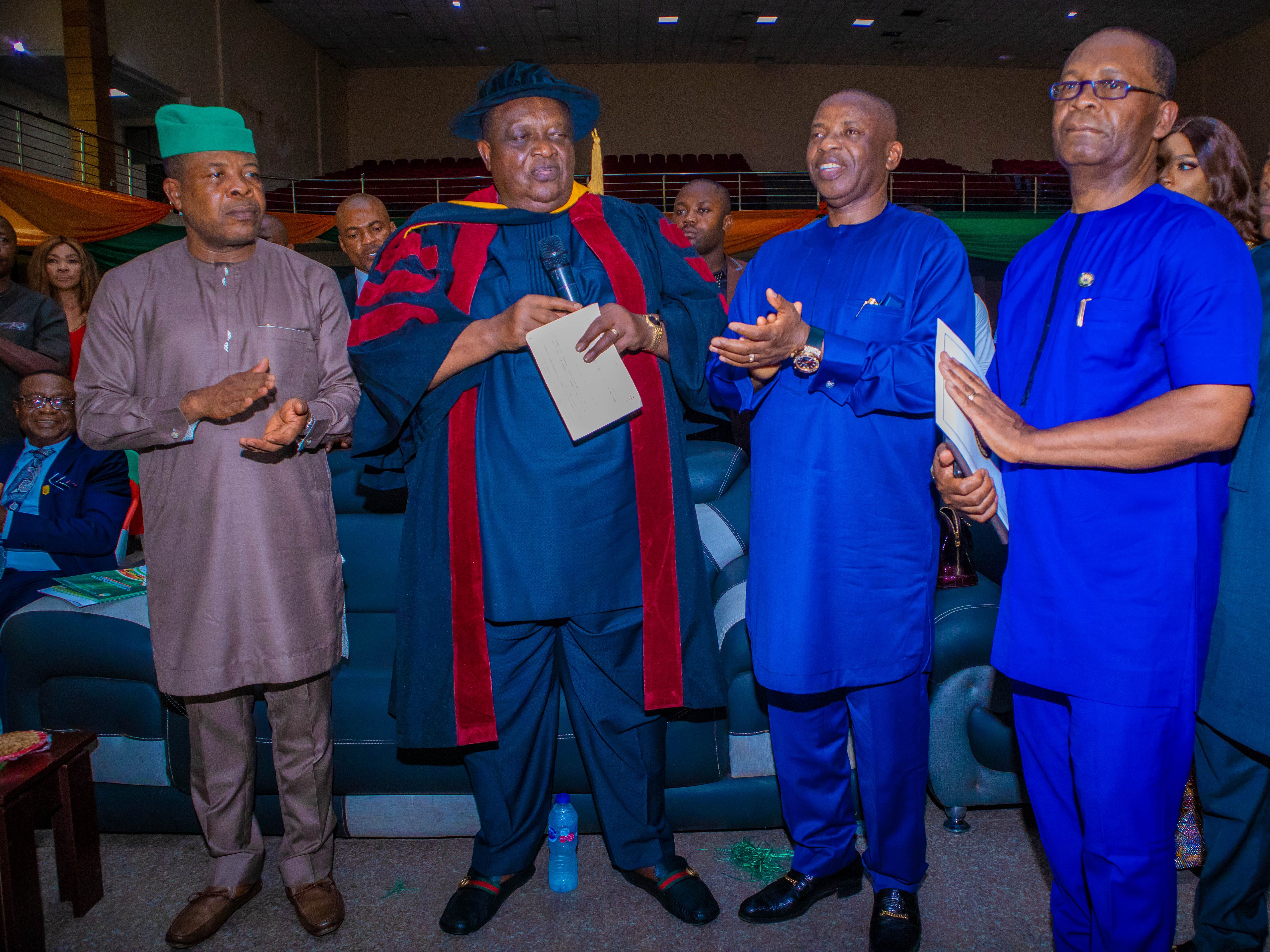 Governor Emeka Ihedioha CON, has advised youths in the state to emulate elder statesman, Chief (Engr) Emmanuel Iwuanyanwu, who through dint of hardwork, rose to an enviable position in the nation.

Speaking as  a Guest Speaker at the 4th Edition of Engr. Emmanuel Iwuanyanwu Annual Lecture Series, organised by the Nigerian Society of Engineers, NSE, Owerri Branch, held in Owerri,  Governor Ihedioha described Engr. Iwuanyanwu, as a great son of Imo State and a trail blazer in the engineering profession.

He said, “Chief Iwuanyanwu whom this lecture series is named after, is one of the revered statesmen in Nigeria. We are proud that he is a great son of Imo State. On the national stage, he remains a huge stabilizing influence.

“In Imo State, he is a figure father and a mentor. His influence spans across many fields such as sports, media and philanthropy”.

He said the Nigeria Society of Engineers, NSE, deserves commendation for naming it’s prestigious Lecture series after Chief Iwuanyanwu, whose exploits in the filed of engineering is worthy of commendation.

He said Engr. Iwuanyanwu  has always demonstrated high sense of patriotism, and showed great interest in the State, especially in the area of physical development.

Speaking on the topic, “My Views On Industrialization of Imo State, Governor Ihedioha, assured of his administration’s readiness to create enabling environment for youths in the State to kick start their own business, stating that government cannot be the sole employer for the unemployed.

He said the main thrust of his administration is to build capacity for youths to enable them start their businesses.

He said, “a desk on Ease of Doing Business has been set up in my office, to assist interested foreign and local start up entrepreneurs in the State”, stating that, “the Imo State Investment Promotion Agency, ISIPA, has been revived, with the intention of showcasing the investment opportunities and the numerous mineral resources in the State”.

Governor Ihedioha explained that his administration has achieved a lot thus far,  adding that the AfrExim Bank, is set to establish an investment centre in the State, that would serve the South East and South South zones,  as the Bank is set to invest 50 million dollars in the State.

He said Imo State is open for business and solicited for partnership, and support from the Nigeria Society of Engineers, NSE, in rebuilding the State.

He said, “I urge you to continue your good works and more importantly, emulate Chief Emmanuel Iwuanyanwu, and invest in Imo State.

In his remarks, Chief Iwuanyanwu, commended Governor Ihedioha for the measures and steps he has taken to reposition the State, especially in rebuilding dilapidated infrastructure across the State.

Speaking, Chairman, Nigeria Society of Engineers, NSE, Dr. Luke Uzoigwe, said the event was designed to honour Chief Iwuanyanwu, who is a respected and distinguished fellow of NSE, noting that the lecture series is aimed at highlighting the benefits of engineering in the State.

Man Dies After Receiving Dirty Slap From ‘Tallest’ In Anambra