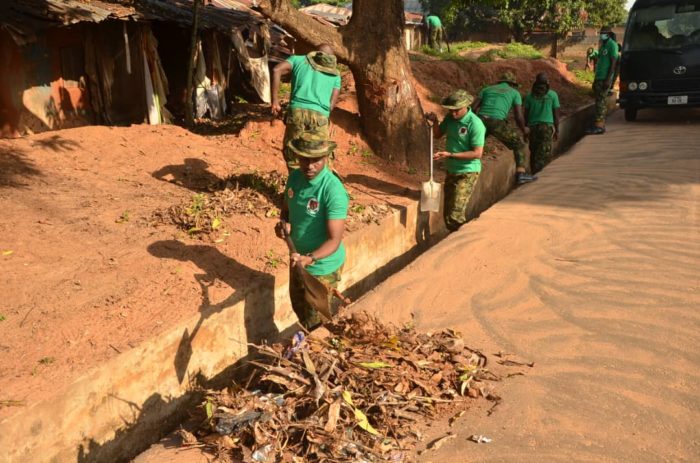 The Nigerian Army on Saturday embarked on sanitation exercise at Toto market in Toto Local Government Area of Nasarawa State.

The environmental sanitation carried out by the officers and soldiers of the brigade involved clearing of garbage and refuse in and around the market as well as clearing of drainages on major roads in the town.

Speaking on the exercise, the Commander, Guard Brigade, Brig.-Gen. Muhammed Usman, represented by his Chief of Staff, Col. Kassim Sidi, said that the exercise was part of activities of Exercise Ayem Akpatuma II 2019.

Usman said the exercise was aimed at creating a secured environment for the people to go about their normal businesses during the months of festivities.

According to him, part of the activities we lined up is civil military cooperation where you see the military coming into the society to render certain assistance to endear us to the larger society.

“The sanitation which we have just conducted this morning is part of it.

“There are many activities lined up such as medical outreach, educational aid distribution to schools, sports, visitation to hospitals and correctional facilities to mention a few.

“We want the society to believe that the military is part of them. We don’t want to appear hostile to them, we want them to feel free with us, mix with us and also know that we have something to offer to give back to them.

“So, this is what we are building on and what we shall continue to do in subsequent exercises,” he said.

Usman explained that the exercise was created by the army headquarters to address security challenges in parts of the country.

He disclosed that the activities of kidnappers had reduced in Toto general area since the arrival and setting up super camp at Kukia-Sabo.

According to him, by the time we are through with this exercise in January, we will have zero or close to zero criminal activities in this area.

He commended the officers and soldiers that took part in the sanitation exercise, saying that the army had the mandate to give back to the society.

On his part, the Chairman of Toto Local Government Area, Prince Nuhu Dauda, said that the presence of the military and other security agencies in his local government had brought comfort to his people.

Dauda added that the recent security threats like kidnapping in the area had been a source of concern, adding that the exercise was welcomed in the area for so many reasons.

The chairman said the sanitation exercise being carried out by the army in Toto market was a confidence booster that the military and the civilians could relate peacefully.

He added that ordinary Nigerians usually looked at military men as unfriendly people, saying that the exercise had enhanced civil military relations and friendliness.

“The presence of the military in my local government is a comfort to my heart and my people.

“On the community service, I want to tell you that I am very happy with the sanitation exercise because the surroundings where the market is, requires cleaning and the army has brought this intervention,” he said.

The Chief Market Overseer, Toto Market, Mr Adugu Ibrahim, commended the army for the exercise, describing it as a rare opportunity for the military to clean a local market.

Ibrahim said that the presence of the military in the community had encouraged the locals to go about their normal businesses without fear of insecurity.

He said that kidnapping had been a challenging threat in the area in recent time, adding that the people were ready to cooperate with the army by providing useful information.

According to him, they will make sure that the traders continue to consolidate on the exercise to enhance the sanitation of the market.

“We are very happy with this activities because it shows that the military is concerned about our security and well being because health is very important,” he said.

Also, Musa Maikaya, Youth Leader, called on the government to create a permanent military base in the area to address the challenge of insecurity.

“We have challenge of kidnapping here and we hope that with the presence of the military now, things will change,” he said.

News Agency of Nigeria (NAN), reports that the representative of the Commander, Sidi, led the Chairman of the local government to the Kukia- Sabo Super Camp to visit the troops.

The super camp is being coordinated by the army in collaboration with other security agencies such as the police and immigration.