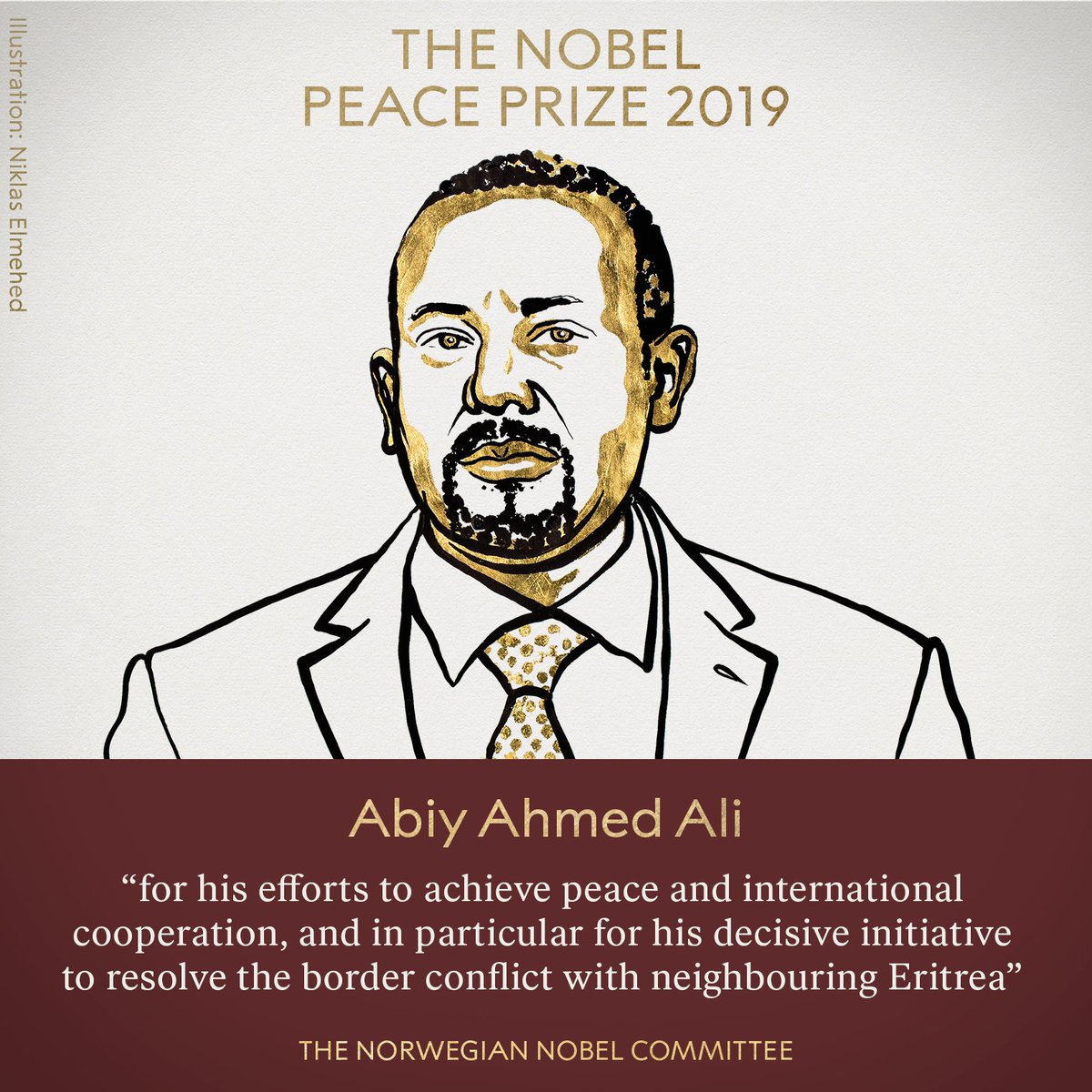 The noble prize committee has awarded the prestigious noble prize award to the prime minister of Ethiopia, Abiy Ahmed. The announcement was made today at 10am by the committee chairman.

Abiy Ahmed was born in the town of Beshasha in the historic Kaffa Province – in the present day Jimma Zone, Oromia Region – Ethiopia on 15 August 1976. His deceased father, Ahmed Ali, was a Muslim Oromo and had four wives while his deceased mother, Tezeta Wolde, was an Orthodox Christian Amhara.

He is the 13th child of his polygamous father and the sixth and youngest child of his mother. His childhood name was Abiyot (MEANS “Revolution”). The name was sometimes given to children in the aftermath of the Derg revolution of 1974. The then Abiyot went to the local primary school and later continued his studies at secondary schools in Agaro town. Abiy, according to several personal reports, was always very interested in his own education and later in his life also encouraged others to learn and to improve.

As a teenager and in early 1991, He joined the armed struggle against the Marxist–Leninist regime of Mengistu Haile Mariam after the death of his oldest brother. He did so as a member of ODP (Oromo Democratic Party), which at that time was a tiny organization of only around 200 fighters in the large coalition army of about 100,000 fighters that resulted in the regime’s fall later that year. As there were only so few ODP fighters in an army with its core of about 90,000 Tigrayans, Abiy quickly had to learn the Tigrinya language. As a speaker of Tigrinya in a security apparatus dominated by Tigrayans, he could move forward with his military career.

In 2008, Abiy was one of the co-founders of the Ethiopian Information Network Security Agency (INSA), where he worked in different positions. For two years, he was acting director of INSA due to a leave of absence of the director assigned to the post.[10] In this capacity, he was board member of several government agencies working on information and communications, like Ethio Telecom and Ethiopian Television. In 2010, Abiy eventually decided to leave the military and his post as deputy director of INSA to become a politician. The highest rank he had achieved during his military career was that of a Lieutenant Colonel.

Starting from 2015, Abiy became one of the central figures in the violent fight against illegal land grabbing activities in Oromia Region and especially around Addis Ababa. Although the Addis Ababa Master Plan at the heart of the land-grabbing plans was stopped in 2016, the disputes continued for some time resulting in injuries and deaths. It was this fight against land-grabbing, that finally boosted Abiy’s political career, brought him into the spotlight and allowed him to climb the political ladder.

In October 2015, Abiy became the Ethiopian Minister of Science and Technology (MoST), a post which he left after only 12 months. From October 2016 on, Abiy served as Deputy President of Oromia Region as part of the team of Oromia Region’s president Lemma Megersa while staying a member of the Ethiopian Federal House of Peoples’ Representatives. Abiy also became the head of the Oromia Urban Development and Planning Office. In this role, Abiy was expected to be the major driving force behind Oromia Economic Revolution, Oromia Land and Investment reform, youth employment as well as resistance to widespread land grabbing in Oromia region.[33] As one of his duties in office, he took care of the displaced one million Oromo people from Somali region during the 2017 unrest.

As head of ODP Secretariat from October 2017, Abiy crossed over religious and ethnic divides to facilitate the formation of a new alliance between Oromo and the Amhara groups, both making up two thirds of the 100 million Ethiopian population.

In early 2018, a lot of political observers considered Abiy and Lemma as the most popular politicians within the majority of the Oromo community and other Ethiopian communities. This came after several years of unrest in Ethiopia. But despite this favourable rating for Abiy and Lemma, young people from Oromia Region called for immediate action without delays to bring fundamental change and freedom to Oromia Region and Ethiopia – otherwise more unrest was to be expected.[30] According to Abiy himself, people are asking for a different rhetoric, with an open and respectful discussion in the political space to allow political progress and to win people for democracy instead of pushing them.

Until early 2018, Abiy continued to serve as head of the ODP secretariat and of the Oromia Housing and Urban Development Office and as Deputy President of Oromia Region. Then he left all these posts after his election as Leader of EPRDF.

On 2 April 2018, Abiy was confirmed and sworn in by the Ethiopian parliament as Prime Minister of Ethiopia. During his acceptance speech, he promised political reform; to promote the unity of Ethiopia and unity among the peoples of Ethiopia; to reach out to the Eritrean government to resolve the ongoing Eritrean–Ethiopian border conflict after the Eritrean–Ethiopian War and to also reach out to the political opposition inside and outside of Ethiopia. His acceptance speech sparked optimism and received an overwhelmingly positive reaction from the Ethiopian public including the opposition groups inside and outside Ethiopia. Following his speech, his popularity and support across the country reached an historical high and some political observers argued that Abiy was overwhelmingly more popular than the ruling party coalition, the EPRDF.