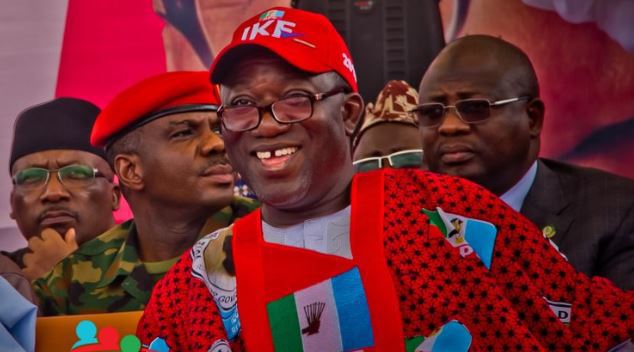 According to Milton, his purpose for writing the two epic poems as clearly stated in the books was to justify the ways of God to man.” If the writer were to be living today, he could be accused of having Ekiti State in mind while writing the two poems. The people of the state actually lost their Paradise in 2014 and regained it in 2018, exactly four years after. In other words, Ekiti experienced both the Paradise Lost and the Paradise Regained as played out in the administration of two successive governors.

Prior to 16 October 2018, the paradise of Ekiti was actually lost in the hands of those who treated its values with impunity. They turned back its fortune by light years. But on that day, Dr. John Kayode Fayemi took the bull by the horn and no sooner had he got sworn in as the  Governor of the state for the second term than he reeled out what he would do in the short term during the first year. He then rolled up his sleeves and started walking his talk.

In his speech of the day, Fayemi instilled a sense of hope and belief in the people, that good would always triumph over bad, and good governance and development would be back on track. The return to power was also described by Most Rev. Felix Ajakaiye, the Bishop of Roman Catholic Church of Ekiti, as the second missionary journey of Gov. Fayemi. We know what a missionary journey is: to rescue a people.

Governor Fayemi first governed Ekiti State between 2010 and 2014, courtesy of the victory he won after three and a half years fighting through a legal system. If you think such a harrowing experience, coupled with the manner in which he was cheated out of power in 2014, ought to have deterred him from governing the state the second time, then you have no understanding of what stuff the doctor of war studies is made of.

An undeterred Fayemi resigned as the Minister of Mines and Steel Development to re-contest for a second term on 14 July 2018 and was officially declared as the winner of the Governorship election in Ekiti State by INEC on 15 July 2018. He mounted the saddle three months after, on 16 October 2018 and he has just spent one year in office now.

This looks like a pre-written script or a predetermined scenario. Yet it is not. Like a super sub in a game of football, Fayemi must have watched clinically from the sideline and must have decided on the steps he would take should he have the opportunity of being called in to come and strike for Team Ekiti again.

The governor, while bidding his time on the sideline, must have uncomfortably observed that the  reputation of the state he had once painstakingly governed was being mindlessly blown to smithereens and must have concluded in his mind to embrace good governance on his second journey. He must have seen how agriculture, the economic mainstay of the state was being relegated to the background and must have concluded to give Agriculture and grassroots development a place of priority. He must have watched helplessly how education was being tampered with and the school children were being taxed and resolved that scrapping of such tax would be immediately done. He must have hollered seeing how the infrastructure he laboured to build in his first four years were decaying and resolved to put them back in shape as soon as he mounted the saddle. He must have left his mouth agape for too long when he learnt that the _owo arugbo_ and other social investments he laboured to institute had been rubbished, abandoned and set aside for a scam-venture called stomach infrastructure, thus resolved to restore it within the first year in office during his second term.

The Paradise was no doubt lost and has now been regained.

In the words of Narendra Modi, “Good governance is not fire-fighting or crisis-management. Instead of opting for ad-hoc solutions the need of the hour is to tackle the root cause of the problems.”

Fayemi saw all of the above as enough challenges for him to return to administer Ekiti again. He built his promises on 5 pillars, viz: Good governance, Agriculture and grassroot development, social investment, knowledge economy and infrastructure development. And he has ensured that he touched on all the five pillars

It is in this light, therefore, that people should regard the first year of Governor Fayemi’s second term in office along *7Rs.* These are restoration of values, repositioning of the state from the political back burner to the front burner among comity of states in Nigeria, reformation of the people’s mindset about governance, reconstruction of the abandoned structures, redistribution of the collective patrimony from what is appropriated by a single person to what the entire people would benefit from. Of course, the state has also witnessed a rebirth during the first year. Well, the seventh “R” is the reaffirmation of Fayemi’s avowed promise that his JKF 2.0 was for the restoration of values and enhancement of impact.

The theme of Fayemi’s first year in office is thus well-conceived. Fayemi is no doubt walking his talk to regain the lost Paradise for Ekiti.

Dipe is the Senior Special Assistant to Governor Fayemi on Public Communications.