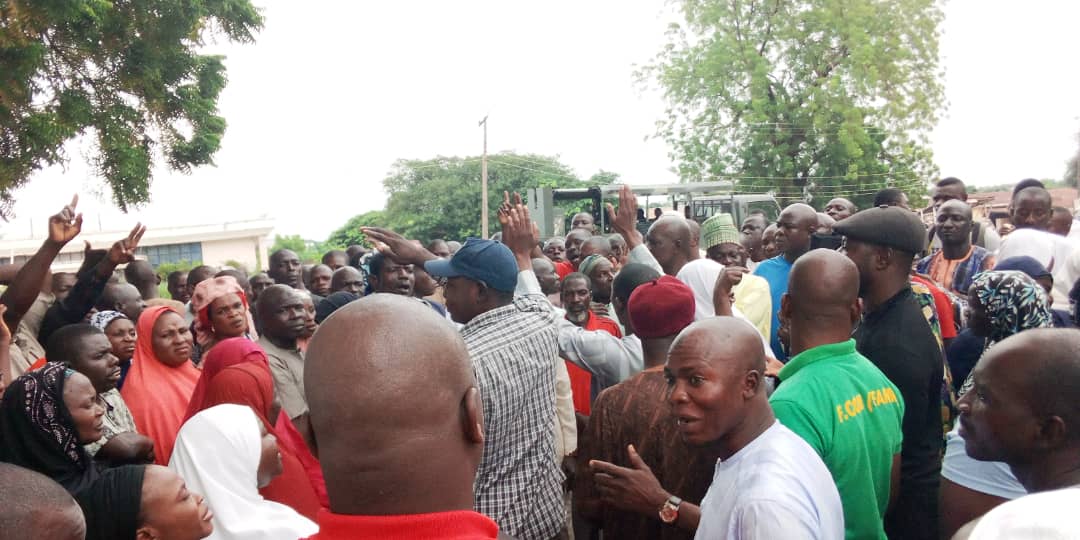 nut chairman open can of worms

Despite the Swift Intervention by men of the 123 Special Forces Army Barrack Doma to forestall peace,workers in their hundred held the council boss of Doma Local of Nasarawa State hostage over the Non-Payment of their September Salary.

Even with a plea by the officer in-charge of 123 Special Forces Army Barrack,Mobile Police Force and Men of the Nigeria Security and Civil Defense Corps,Police and painstaken plea by the leadership of Nigeria Union of Local Government Employee the aggrieved civil servants insisted that their salary must be pay in earnest.

The three hours meetings ended in deadlock,and no end insight to the imbroglio as the chairman,Rabo Sani could not give vivid explanation to what happened to September salary.

Sani while briefing the rampaging Local Government civil servants attributed the hiccups that lead to the shortfall to over-staffing,and the payment of part of liability he inherited to the tune of N100m from his predecessor.

According to Rabo Sani,”with the commencement of Local Government autonomy our problems surfaces because what we normally do before the autonomy was to augment salaries of few council’s with those with less financial burden”.

The chairman attested that the council pay money for the installation of street light,over N30m for a 1km road leading to Andoma palace while another 300m road is ongoing,for the month of August,he said the Local Government has a shortfall of N9.2m in September salary.

When asked by Journalists on the way out,Rabo Sani averred that he approached a bank to collect an overdraft but to no avail,saying bank says they won’t  grant an overdraft exceeding N20m without the prior knowledge of their head office.

“We are still waiting for a respond from their head office”

The chairman of caretaker committee of NULGE,Abubakar Rilwan pleaded with the protesting civil servants to bury their hatchet but was turn to deaf ears.

During a question and answer session,Musa Abubakar Ojigo from Agric Department admonished the council chairman to fear God as he said one day Rabo Sani would give account of all his deed.

“Chairman we want to know how many ghost workers were discovered during the last biometric screening,How many died and how many retired from service and how much was our last grant ?

Abubakar Ahmed Ashapa from Personnel Department asked whether it was ghost workers that infiltrated Local Government payroll or human being ?

Liman Ashapa from Local Government Education Authority asked whether Value Added Tax was only meant for project,how many ghost workers do we have in Doma ?

Ahmed Yakubu Akwe from Education asked the chairman the specific number of staff and salary but to no avail.

The presence of the chairman Nigeria Union of Teachers,Ali Saidu is the last straw that breaks the camel’s back as he calm the situation with shocking revelations which was never resisted by the chairman.

Hear him,”chairman we want you to tell Local Government workers  what happened to the deduction from Federal Mortgage Bank,June VAT and Union Dues which you denied us,after the last biometric screening the council recover N4.4m from the exercise,where is the money ?

During a meeting you said June VAT is with the DFS right ?

The salary of Education is not up to N60m .

The entire salary of Doma is not up to N128m.

In August we got N30m

These are questions that were never answered or denied by the chairman who left the Local Government amidst tight security.