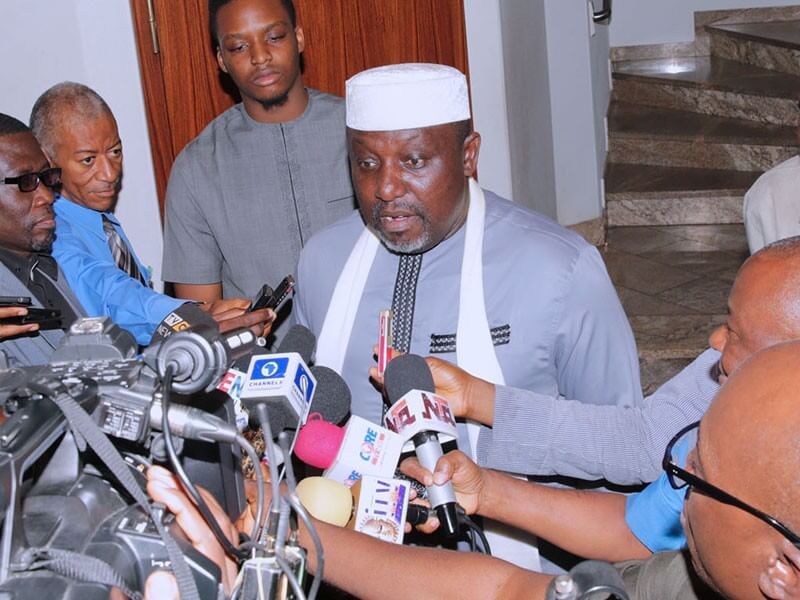 Two times Chief Librarian of Imo State University, Owerri and erstwhile Commissioner for Petroleum and Environment, Prof Okee Okoro has revealed that the immediate past Governor of the state, Rochas Okorocha appointed a fake Professor, Dafe Otobo as Vice Chancellor of Eastern Palm University, Ogboko for reasons known to him.

He said that the Edo State born Vice Chancellor, Otobo retired from Lagos State University having attained 70 years mandatory age, wondering how a non indigene that is so old could head a state University, when Imo possesses qualified individuals if Okorocha was not meant to cover the frauds he committed.

Prof Okoro disclosed this Friday in a chat with newsmen in Owerri, the capital of Imo State. According to him, it is illegal for an individual to be made a Professor in a field he does not possess degree in, saying that the Vice Chancellor of Eastern Palm University, Dafe Otobo should be held to explain his professorial award that engineered his appointment.

He expressed bitterness that despite engaging the alleged fake Professor Otobo as Vice Chancellor, Okorocha also appointed his wife’s cousin, Mr. Ernest Onuoha from Isikwuato, Abia State as Registrar of the school, describing it as not only an action to cover shoddy deals, but an affront to Imo people.

He said, “The Vice Chancellor of Eastern Palm University, Dafe Otobo from Edo state retired from Lagos State University after reaching seventy years mandatory age. His Professorial award is doubtful. He does not attend work; he lives at Spibat with Okorocha, perhaps discussing how the wealth of the state will be looted with him”

Prof Okoro revealed that all documents from National Universities Commission (NUC) that established the institution recognized Eastern Palm University as the 42nd state University and 143rd university in Nigeria respectively, wondering why Okorocha should claim ownership of the school after funding it with state resources.

“Governor Emeka Ihedioha should do something very urgent; due process is nonsense when your rights are infringed. As a Commissioner under Okorocha, I was privileged to most information. From available records by NUC, Eastern Palm University is recognized as the 42nd state University and 143rd University in Nigeria. So, Governor Ihedioha should not make the school a subsidiary of Imo State University but should allow it to run independently having received approval of NUC. A situation where the Governor is helpless, he should invite those with relevant information to assist him to ensure that every Okorocha’s link with the institution is cut to side”

“How could such a school have two, three or five students in a department when there is overflow of admission seekers at Imo State University? This means that Lecturers are not teaching the students. The best time to admit students into various department of the school is now. This will be easy if Government partners with Imo State University, Owerri so that overflow of students not admitted at IMSU will be sent to Eastern Palm University, which is the second Imo State Government owned University” He submitted.

Prof Okoro further queried why Okorocha did not name the school “Rochas Foundation University” if he claims that the institution does not belong to Imo State Government, advising the Ihedioha’s led administration to approach NUC for clarification on ownership of the school, which he vowed would uncover the fact that there was no ‘Public Private Partnership’ (PPP) arrangement as claimed by Okorocha.