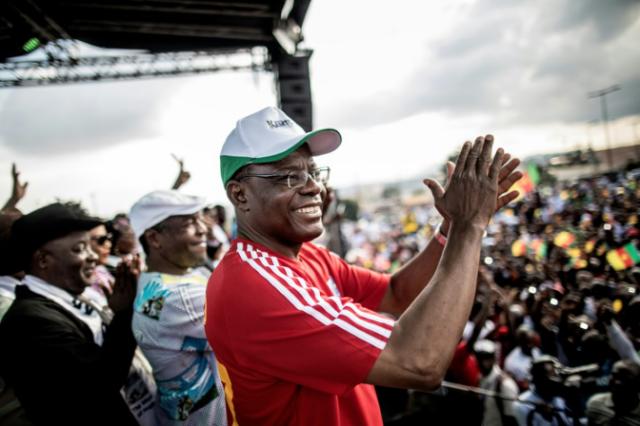 Cameroon’s main opposition leader Maurice Kamto, who claims to have won last year’s presidential election, went on trial with 88 others in a military court Friday on insurrection charges but the case was deferred until next month after one of the accused complained of dizziness in court.

Kamto, 65, and dozens of political allies and supporters face charges of insurrection, hostility to the motherland and rebellion — crimes which could carry the death penalty.

The head of the opposition Movement for the Rebirth of Cameroon (MRC) party was arrested in late January after months of peaceful opposition protests over the results of the October 2018 election won by Paul Biya, who has been in power for 36 years.

Kamto arrived in the court amid tight security with around 200 police in anti-riot gear guarding the intersection in front of the court.

Others patrolled the area in pick-up trucks while 50 security troops guarded the entrance to the court following a call by his followers to rally there in protest.

Cameroon’s former colonial ruler France, the United States and the European Union have been calling for his release from detention for eight months.

“There is no justification for Mr Kamto and his supporters to have been incarcerated for eight months in these conditions,” their French lawyer Antoine Vey told AFP.

The trial was postponed to October 8, lawyers for both Kamto and the defence said, after Christian Penda Ekoka, a former economic adviser to President Biya, complained he felt unwell in court.

“The courtroom was cramped with poor ventilation. We were suffocating. I think that’s what brought on Mr Penda Ekoka’s malaise,” said Michel Ntchale, one of Kamto’s lawyers.

Two people were arrested as they tried to enter the courtroom, including Sosthene Medard Lipot, a leader of the Kamto’s party, the Movement for the Rebirth of Cameroon, lawyers said.

The crackdown on Kemto and the opposition caused outrage among rights groups and many western governments.

In March, the US assistant secretary of state for African affairs Tibor Nagy, told Radio France Internationale that Cameroon would be “very wise” to release Kamto because his detention is widely perceived as politically motivated.

A top European Union official criticised the arrests and the military court’s “disproportionate” proceedings against them.

France in May also demanded the release of Kamto and his supporters.

Kamto and his allies said in a letter that they were “ready to face justice so the truth would come out in this case”, demanding free public and press access to the courtroom.

Along with the political protests, Biya is also facing a struggle on other fronts.

Since 2017, fighting between troops and English-speaking separatists demanding independence in two western regions has killed hundreds, forced nearly 500,000 people from their homes and filled jails with anglophone activists accused of militancy.

In the north of the country, Boko Haram’s nearly 10-year Islamist insurgency which is based in northeast Nigeria has more recently spilled over into Cameroon and other neighbours.