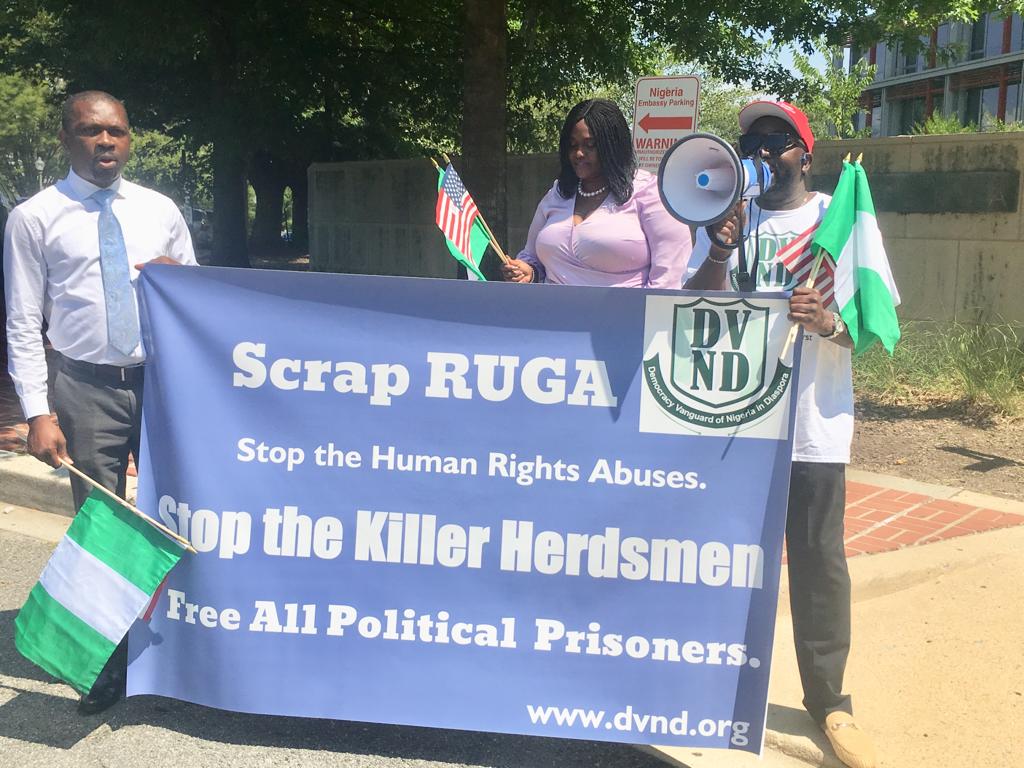 A group known as Democracy Vanguard of Nigerians in Diaspora (DVND) has petitioned the International Criminal Court (ICC) over an alleged genocide leading to killings of some Nigerians in the last four years.

The group, a non-governmental, non-profit and human rights organization involved in global network for the protection of democratic processes around the world and especially on the continent of Africa, said it is constrained write the ICC, drawing its attention to the threat being posed to the Nigeria’s democracy and the continuing human rights abuses.

In a letter addressed to the Special Prosecutor of ICC, titled “Act of genocide and crimes against humanity in Nigeria” urged the international body to act promptly.

According to the letter signed by the president of the group, Timothy A. Sule, said: “As a group, we are tired of the endless carnage going on in Nigeria and we feel very strongly that the Government of President Muhammadu Buhari cannot be exonerated from the ongoing continuous perpetuation of the pogrom against a people of a religion and ethnic configuration.

“As you already know Sir, Nigeria is a State Party to the Rome Statute, the ICC has jurisdiction over war crimes, crimes against humanity and genocide committed on the territory of Nigeria or by its nationals from July 1ST 2002.

“Having concluded that some of the alleged crimes committed in the Nigeria situation fall within subject-matter jurisdiction of the ICC, the Office of the Special Prosecutor is vehemently urged to carry independent investigation of constant killings with a view to trying and punishing the culprits.

“Sir, we call on your esteemed office to as a matter of urgency set up a committee to carry out relevant assessment and investigation of the contemporary national security issues in conformity with the ICC’s principle of complementarity.

“Currently, rising conflict between herders and farmers in Nigeria is already 10 times deadlier now than Boko Haram’s insurgency. This is certainly a cause for worry.

“In December of 2015, the Nigerian army under the command of the Chief of Army Staff Lt. Gen. Tukur Yusuf Buratai led the mass killing of hundreds of minority Shiites Muslims in the Northern State of Kaduna in Zaria town.

“According to the self-given testimony of the Kaduna State Government manned by the rambunctious and bellicose Governor Mallam Nasir El-Rufai, at least 350 bodies of victims of the brutal army massacre were secretly buried in a mass grave at Mando, a suburb town in Kaduna State.

“The Federal government of Nigeria has refused, neglected, declined to stop the bloodshed, improve security; end impunity and or even retire the Army Chief and or investigate him and all other members of the Nigerian security services at all levels implicated in this unconscionable unleashing of terror by the Nigerian army and police on the citizens of Nigeria as demanded by Nigerians of goodwill.

“We state once and again that Nigerian lives are sacred. No human is dispensable. Lives must be protected as must the dead who deserve respect after death and decent burial.

“Rather than take the best approach as stated above, they flagrantly refused to toe the part of honor.

“Their latest strategy was an attempt to forcefully prevail on the component states to eject the local owners of lands and converting same for the benefit of the President’s Buhari’s kinsmen (the cattle Herders).

“Quite unfortunately, a group known as Miyetti Allah Cattle Breeders Association of Nigeria (MACBAN) has come out to publicly claim responsibility over the killings and reprisal attacks on farmers especially in the Middle Belt States of Plateau, Benue, Nasarawa, Kogi etc.

“What this entails is that they are the sponsors of the genocide and carnage we are witnessing today.

“We insist that the leadership of the group must provide a list of their sponsors for the whole world to know.

“These Fulani herdsmen killing on behalf of Miyetti Allah Cattle Breeders Association of Nigeria (MACBAN) group use sophisticated military weapons that were smuggled into the country through the porous borders and ports; and they find their way to the various villages and towns in the middle belt of Nigeria and other States in the Southern part,; through hundreds of military and police check points. How did they pass through without notice? We strongly belief the government is behind the group too as these leaders have never been invited for interrogation over their public claims and acceptance of being behind the killings and reprisal attacks on the ground their cattle are be stolen or poisoned.”

While calling on the ICC to immediately stand up to its sworn duty to the international community by investigating arresting and prosecuting the various entities involved in the crimes against humanity, the said Nigerians are tired of the unending terror.

“The rank and file of the military are not motivated. Thus, the moral impetus to confront these monsters is evidently absent.

“Though, some informed and intellectually sagacious citizens have raised allegations that the Nigeria army is involved in the intractable terror; and that the army has only pretended to have been unable to address and put a lid on it for 4 full years of this administration.

“Again, this is gravely disturbing if this is the true position.

“We are aware that this terror can never be stopped unless the sponsors are identified, arrested and prosecuted. This is where Gen.  Buratai and the leadership of Miyetti Allah Cattle Breeders Association of Nigeria (MACBAN) are of interest in this whole brouhaha.

“The Buhari’s administration in its 4 years has never arrested a single sponsor of terror or any herdsman suspected to have been engaged in the mindless killings.

“A few days ago, a renowned leader of the social cultural group from Southwestern part of Nigeria (a group known for its hardline stance against the anti-people policies and the grave insecurity in Nigeria under of the government of the day) P.A Fasonranti, had his daughter, Mrs. Funke murdered by suspected herders.

“Curiously, the government issued an official statement stating that armed robbers and not alleged Herdsmen murdered the young woman in cold blood.

“Daily, the followers and members of Shiites movement in Nigeria have led protest demanding the release of them from incarceration. The Leader of Shiites had been granted bail by a competent court of jurisdiction more than three times in his close to four years of being in jail.

“During their last protest to the Nigeria’s National Assembly, the media (both print and electronic) were washed with the gory details of how the Shiites were shot at, killing some and injuring others.”