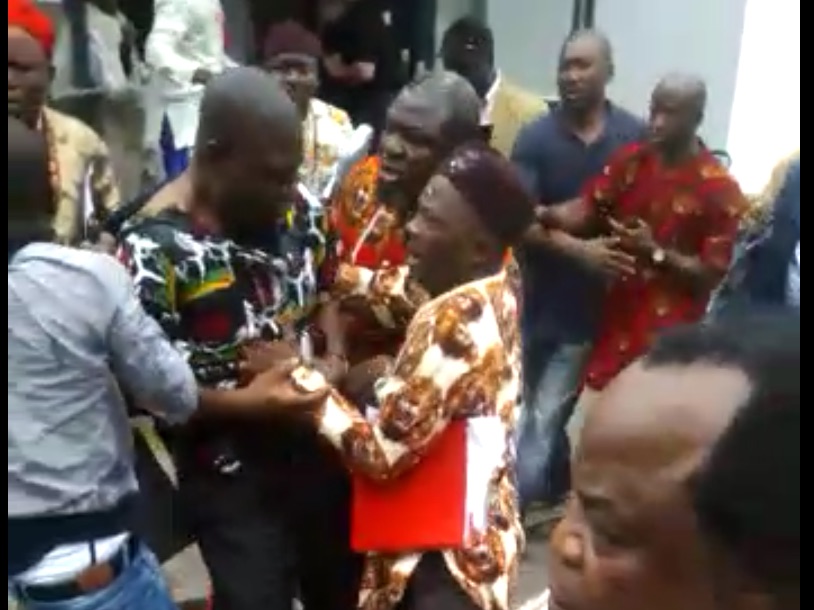 Says the law must run its full course

Ndi-Igbo Germany, NIG, an umbrella body of Igbo people living in Germany, has tendered unreserved apology to the former Deputy President of the Senate, Senator Ike Ekweremadu, over the weekend attack on him by members of the Indigenous Peoples of Biafra (IPOB) in Nuremberg, Germany, at the weekend.

The group said that any embarrassment to a leading light of Ndigbo like Ekweremadu was an embarrassment to the entire Igbo race and Nigeria, vowing to ensure that the law runs its full course.

The body said the event was part of its efforts to encourage foreign investment and industrialisation of Igboland, noting that it “provided a forum for Igbo people in Diaspora to network and to engage German business community with interest in investments and development in Igboland in particular and Nigeria in general”.

In a statement on Monday signed by their leader, Engr. Ogechukwu Nsofor, the group said:  “We, Ndi-Igbo Germany (N.I.G) the umbrella/apex union of all Igbo unions operating in the Federal Republic of Germany are shocked and dismayed by the unprovoked, unwarranted and senseless attack leashed on Senator Dr. Ike Ekweremadu in Nuremberg, Germany.

“Ndi-Igbo Germany, wish to offer our unequivocal apology to our special guest of honour, Senator Ike Ekweremadu – former Deputy Senate President – for the unfortunate treatment misdirected at him by members of Indigenous Peoples Of Biafra (IPOB) in Germany during the occasion of our 2nd Annual Igbo Cultural Festival and Convention 2019.

“It must be emphasised that Senator Dr. Ike Ekweremadu had nothing personal to gain in attending our cultural day. Rather the Igbo residents here in Germany lost an opportunity to tap into his reservoir of knowledge.

“No words can describe our shock, our consternation, and our sadness at this inexcusable, shameful and senseless attack. We apologise from the depths of our hearts that you had to experience such a horrible thing here in our midst. This is not how we are here. Please do not hold this incident against the 99 percent law abiding Umu-Igbo in Germany.

“Our apologies go to Ohaneze Ndi Igbo and to all well-meaning Igbo-Diasporan groups and associations both at home and abroad for this disgrace.

“We sincerely apologize to the National Assembly and indeed to our entire country for such an unwarranted assault on Senator Dr. Ike Ekweremadu by the IPOB members in Germany.

“Let this event be a rallying call to all Umu Igbo at home and worldwide to always seek unity rather than primitively turning against ourselves in senseless violence which will make neutral and friendly global nations turn away from us.

“Ndi-Igbo Germany (N.I.G) condenm in strongest terms this action by the members of IPOB in Germany against Senator Dr. Ike Ikweremadu. Ndi-Igbo Germany distances herself from any group that encourages violence, directly or indirectly.

“It is not acceptable that an Igbo man or woman would come to the occasion of an ancient Igbo traditional event like Iri-ji and not only cause commotion, but also physically attack an invited guest, a fellow Igbo brother from home and a senior Igbo elder statesman in the person of Senator Dr. Ike Ekweremadu. This is an abomination in Igbo land. And in a foreign land! Is this what we have come to in our united struggle, Ndi Igbo? A house divided against itself cannot stand.

“This single action will cost IPOB in Germany more than 70% of  her hitherto sympathisers. What IPOB Germany thought in their inept, diminutive, and megalomaniac mindset as a humiliation of Senator Ekweremadu is in reality a humiliation of the Igbo race in a foreign Land.

Finally, and on a serious note: Ndi-Igbo Germany abhors all kinds of violence. We are committed to working and cooperating with our host country Germany and with her constituted authorities.

“Ndi–Igbo Germany will let the full weight of the law take its course. As we all work together towards the redemption of Ala Igbo, let no one think that he or she has more claim to Igbo nation than the other”.