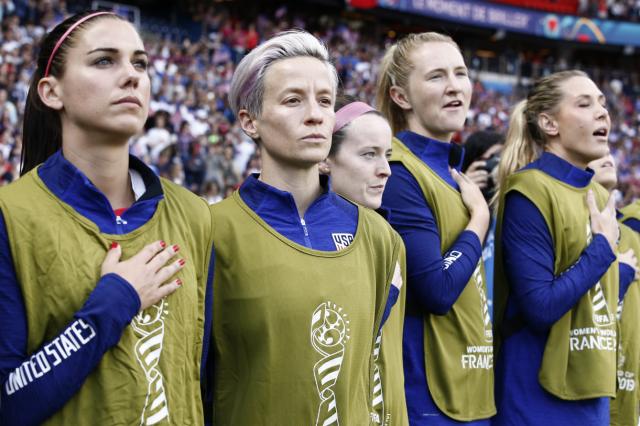 If, for some reason, you thought USWNT star Megan Rapinoe might have changed her mind about visiting the White House if the United States women’s national team wins the Women’s World Cup, then wonder no more.

Rapinoe had been asked by Eight by Eight magazine if she was looking forward to making the trip, which was met with an audible scoff.

That emphatic answer backs up what Rapinoe said before the tournament, that she would “absolutely not” attend a White House celebration in the event of a World Cup win. Fellow USWNT star Alex Morgan also said she would not attend.

Rapinoe, who drew a public condemnation from President Donald Trump for not putting her hand on her heart during the national anthem before a game, has made no attempt to hide her scorn for the Trump administration.

From an interview with Yahoo Sports earlier this month:

She is at ease, however, in her role as USWNT co-captain. She is “a walking protest when it comes to the Trump administration,” she says, because of “everything I stand for.”

“I feel like it’s kind of defiance in and of itself to just be who I am and wear the jersey, and represent it,” she continues. “Because I’m as talented as I am, I get to be here, you don’t get to tell me if I can be here or not. So it’s kind of a good ‘F you’ to any sort of inequality or bad sentiments that the [Trump] administration might have towards people who don’t look exactly like him. Which, God help us if we all looked like him. Scary. Really scary. Ahh, disturbing.”

As Rapinoe mentions in her more recent quote, the USWNT probably shouldn’t even be expecting an invitation from Trump if it wins the tournament given his past history with not inviting any champion he thinks will reject him.

No NBA or WNBA champion has visited the White House during the Trump administration, and the NFL’s Philadelphia Eagles also had their invitation rescinded after it became clear most of the team’s players would be skipping the event. This year’s NBA champion Toronto Raptors seem set to continue the trend.