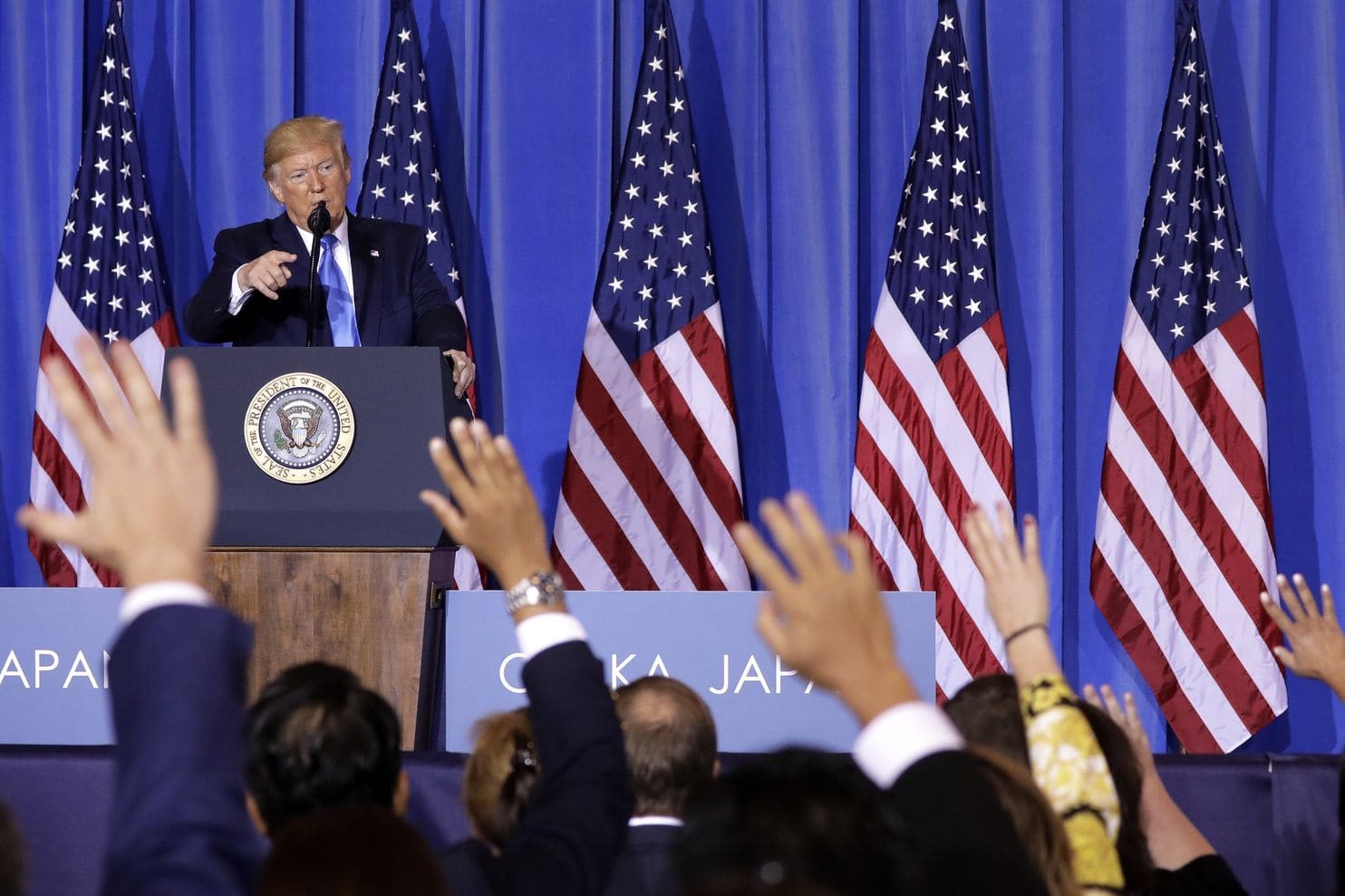 OSAKA, Japan — President Trump responded Saturday to criticism from former president Jimmy Carter by calling him a “terrible president” and asserted that Sen. Kamala D. Harris (D-Calif.) got “too much credit” for her debate performance following two days of intensive meetings with foreign leaders here.

Trump mocked Carter — who a day earlier suggested his presidency was illegitimate because of Russian interference in the 2016 election — as a “nice man” who was “trashed by his own party.”

“Russia, Russia, Russia,” Trump said in an exasperated tone during a news conference at the end of the Group of 20 summit. “He’s a Democrat and that’s a typical talking point.”

[At a retreat, Carter and Mondale talked about the old days, and went after Trump]

Trump added that Carter’s efforts to deal with Iran, which held 52 Americans hostage for 444 days, were “a disaster. They tied him up in knots. That’s probably why Ronald Reagan became president.”

The president also weighed in on the first Democratic debates that took place this week in Miami, suggesting that Harris’s performance was overrated and that former vice president Biden could have responded more effectively to her criticism of his opposition to federally mandated desegregation busing in the 1970s.

“She’s been given too much credit for what she did. It wasn’t that outstanding,” Trump said. “He was hit harder than he should have been hit.” Asked his own position on busing to desegregate public schools, Trump said he was developing a policy related to the issue that would be revealed in four weeks but declined to elaborate.

Trump also praised Mexico for stepping up immigration enforcement, stated that his administration was developing a “smart person’s waiver” to allow successful foreign college students to remain in the United States more easily after graduating, said the administration would appeal a federal judge’s ruling to block the use of Pentagon funds for a section of a proposed border wall and called another judge’s decision to stop the administration from adding a citizenship question to the 2020 Census “horrible and ridiculous.”

Trump also was asked why he appeared to take a joking tone a day earlier when he told Russian President Vladi­mir Putin “don’t meddle in the election” during a photo op ahead of their bilateral meeting. The president made the remark just after referring to reporters as “fake news” while making small-talk with Putin.

“You have to look at the words. I did say it,” Trump said Saturday, before pivoting to say he would like to increase economic trade with Russia. When another reported followed up, the president said he and Putin talked about the election issue a “little bit” in private, but he didn’t offer details of their discussions.

In all, Trump held court for more than an hour, fielding questions from numerous reporters, before departing Osaka aboard Air Force One to Seoul, where he will meet over two days with South Korean President Moon Jae-in. In a tweet Saturday, Trump also invited North Korean leader Kim Jong Un to meet at the demilitarized zone that has separated the peninsula since the Korea War armistice — though it remained unclear whether Kim would accept.

“I think he follows me” on Twitter, Trump said of Kim, though he is not known to have an account on the social media site. “We got a call very fast” after the tweet.

Trump sought to project confidence that his performance here helped advance his foreign policy, announcing that trade talks have resumed with China and projecting confidence that Iran, which has rejected his overtures to negotiate after the United States pulled out of a multination nuclear pact with Tehran, wants to “make a deal.”

“I said before that maybe I’ll be a sleeper on foreign policy,” Trump declared.

Yet the president again made clear that domestic policies are always at the top of mind, even halfway around the world. Having engaged in a weeks-long battle with Biden, who has taken an early lead in Democratic primary polling, Trump appeared eager to attack Harris, who enjoyed significant buzz after her performance during the debate on Thursday.

“You never know who’s going to be tough,” Trump said, when asked about the former prosecutor who previously served as California’s attorney general. “Sometimes the ones you think are tough, not so much.”

As the news conference wore on, Trump seemed to confuse a broader discussion of the fight over global governance with his personal grievances against Democrats.

When a reporter asked if the president agreed with Putin’s suggestion, in a recent newspaper interview, that “Western-style liberalism” was in decline, Trump had another thing in mind.

He criticized the cities of Los Angeles and San Francisco, which he said are “sad to look at” because they are “run by liberal people.”

With that, the president ended his session with the room full of journalists and headed to the airport.