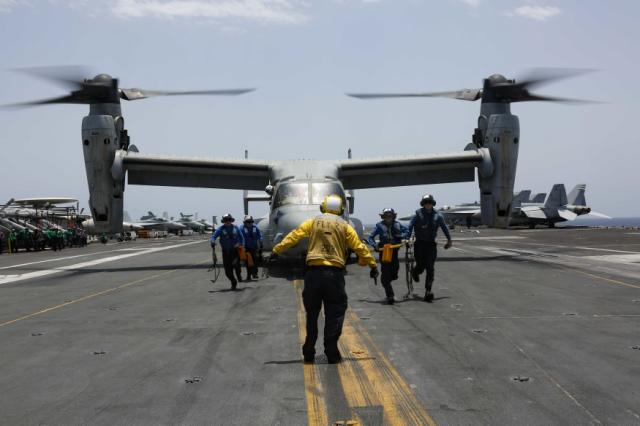 The latest on developments in the Persian Gulf region and elsewhere in the Mideast amid heightened tensions between the U.S. and Iran (all times local):

Days after saying he hoped the U.S. and Iran would not go to war, President Donald Trump threatened Iran with destruction if it seeks a fight.

Trump issued the warning after a rocket landed less than a mile from the U.S. Embassy on Sunday in Baghdad’s Green Zone, further stoking tensions in the region.

Trump tweeted: “If Iran wants to fight, that will be the official end of Iran. Never threaten the United States again!”

Iranian officials say the country is not looking for war.

Trump had seemed to soften his tone after the U.S. recently sent warships and bombers to the region to counter an alleged, unexplained threat from Iran. On Thursday, when asked if the U.S. and Iran were headed toward armed conflict, he answered: “I hope not.”

An apparent rocket attack has exploded in the Iraqi capital’s heavily fortified Green Zone, home to government headquarters and the U.S. Embassy.

Iraq’s state-run news agency says a Katyusha rocket crashed inside the area without causing any casualties.

Alert sirens sounded briefly in Baghdad after the explosion was heard, according to Associated Press reporters on the east side of the Tigris River.

The apparent attack comes amid heightened tensions across the Persian Gulf, after the White House ordered warships and bombers to the region earlier this month to counter an alleged, unexplained threat from Iran. The U.S. also has ordered nonessential staff out of its diplomatic posts in Iraq.

Iraq hosts more than 5,000 U.S. troops, and is home to powerful Iranian-backed militias, some of whom want those U.S. forces to leave.

The U.S. Navy says it has conducted exercises in the Arabian Sea with an aircraft carrier strike group ordered to the Persian Gulf to counter an alleged, unspecified threat from Iran.

The Navy said Sunday the exercises and training were conducted with the USS Abraham Lincoln aircraft carrier strike group in coordination with the U.S. Marine Corps, highlighting U.S. “lethality and agility to respond to threat,” as well as to deter conflict and preserve U.S. strategic interests.

Also taking part in exercises were the Kearsarge Amphibious Ready Group and the 22nd Marine Expeditionary Unit, both deployed to the U.S. Fifth Fleet area of operations in the Persian Gulf.

The Navy says the exercises, conducted Friday and Saturday, included air-to-air training and steaming in formation and maneuvering.

A top Saudi diplomat says the kingdom does not want war but will defend itself, amid a recent spike in tensions with archrival Iran.

Adel al-Jubeir, the minister of state for foreign affairs, spoke early Sunday, a week after four oil tankers were targeted in an alleged act of sabotage off the coast of the United Arab Emirates and days after Iran-allied Yemeni rebels claimed a drone attack on a Saudi oil pipeline.

Saudi Arabia has blamed the pipeline attack on Iran. Gulf officials say an investigation into the tanker incident is underway.

A-Jubeir told reporters: “We want peace and stability in the region, but we won’t stand with our hands bound.”

Ministers from major oil-producing countries were to meet in Saudi Arabia later Tuesday.