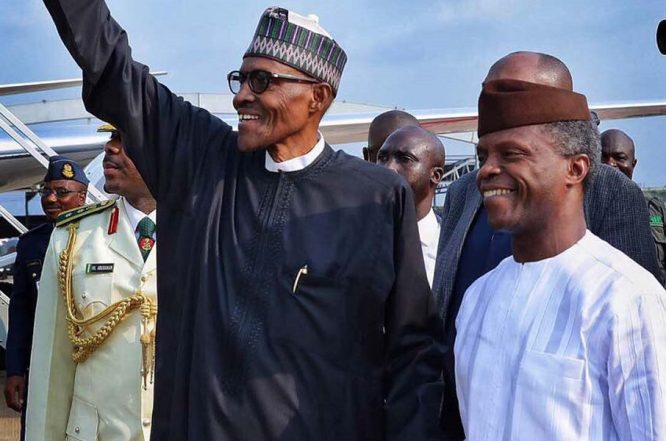 Vice President Yemi Osinbajo on Monday uncovered what he called incredible things, which he said, happened in Nigeria a few weeks before the 2015 general elections.

The vice president spoke in Abuja at the legislative economic summit themed “Legislative Framework for Economic Recovery and Sustainable Development”.
He said under the administration of former President Goodluck Jonathan, Nigeria witnessed barefaced stealing and waste of resources unprecedented anywhere in the world; the situation, he alleged, caused the recent economic recession.
He said between 2013 and 2015 with oil prices averaging up to $110 per barrel, “sometimes going to as high as $150, the government of the day somehow contrived to increase national debt from N7.9 trillion to N12.1 trillion; while reducing external reserves from $45 billion to $28 billion as of May 2015.”
The vice president said under Jonathan’s watch,  there was also inflation of contracts and other procurements which, he noted, always made the cost of infrastructure necessary for development unaffordable.
“Of course, we all know that there was very little by the way of investment in infrastructure and capital projects. In fact in 2015, capital spend was less than 11%. So there was very little to show for where this money went.
“I don’t want to keep repeating some of the incredible things that happened, a few weeks before the last elections; how large sums of money, a 100billion in cash ostensibly for security. Another $289million in cash was paid out in the same period.
“No country can survive that kind of unbridled waste and corruption. We must never forget, that corruption is perhaps, the most outrageous cause of our economic decline.
“Aside from barefaced stealing or waste of resources, the inflation of contracts and other procurements ensures that the cost of infrastructure necessary for development will always be unaffordable.
“So if what we should spend on building a 200km road ends up being spent on a 20 km road, there is no way we are going to make any progress and there is no way we won’t end up in some kind of economic decline or the other,” Osinbajo stated.
He recalled: “In 2015, oil prices fell to as low as $28 at some point. But worse still, throughout 2016 we lost almost a million barrels a day in oil production due to vandalization and sabotage of oil facilities and pipelines. We lost something in the order of about 60% of our revenues. Yet we could have survived without going into a recession, I think Dr. Teriba so ably stated that, we could have survived if we had savings. But we had no savings only debt.
“As economists would say, and as Dr. Teriba had said, we did not have the fiscal buffers to enable a counter-cyclical approach. In other words, we lacked the savings to see us through the lean times.  Why? Why did we lack savings, when so much money was being made? This is the elephant in the room.
‘Today, we can say that despite the 60% or even more reduction in revenues from oil, we are bailing out the States and our capital spend in 2016 was close to N1.3trillion, the highest yet in the country’s history. So with more prudent management, it is possible to do more with far less money.”