…But LGA funds belong to the State – Gov

Information reaching 247ureports.com indicate that the grip of corruption has taken firmer hold of the affairs of governance in Bauchi State under the present administration. This is with particularity to the management of financial resources of the Local Government Areas [LGAs] in the State and the Sustainable Development Goals [SDGs] – under the present Bauchi Governor.

According to available information, the Bauchi Governor and his aides turned the monies belonging to the twenty [20] LGAs and the monies earmarked for the SDG programs – to their personal monies.

Already, the Gombe zonal office of the EFCC [Economic and Financial Crimes Commission] arrived Bauchi State on their investigation of the activities of the aide to the Bauchi Governor with regard to the alleged mismanagement of financial resources earmarked for the SDG.

247ureports.com is not certain the extent the SSG’s intervention reached to effect the EFCC’s investigation.

Meanwhile, the interrogation of the suspects is reported to have begun yielding expected result when the office of the Secretary to the State Government [SSG], Alhaji Mohammed Nadada decided to act to intervene on the EFCC interrogation to halt the agents of the EFCC from further delving into the financial activities at the SDG. A source from the EFCC revealed that over N500million was misappropriated from the SDG accounts into other private accounts.

The SDG is housed under the office of the SSG and was used to award ghost contracts to the Bauchi Governor, the Bauchi Deputy Governor, the Chief of Staff, Director of Procurement, the Speaker to the State Assembly, and a majority of the lawmakers of the State Assembly. Under SDG office, contracts for 33 solar-powered boreholes, 57 hand-pumped boreholes were awarded to aforementioned. Also, contracts for construction of 19 primary health centers, staff quarters and VIP toilets, supply of six ambulances in various locations across the state were awarded – also to the aforementioned.

[247ureports.com will publish the details, names of companies used to award contracts and other details soon]

Meanwhile on the LGA front, available documents point to grand scale misappropriation orchestrated by another set of aides to the Bauchi Governor.

The Bauchi Governor and his team would collect the entire funds allocated by the federal government for the 20 LGAs in the State – since the LGA chairmen were elected – only caretaker committees were appointed to oversee the affairs of the various LGAs. Through this effect, the entire monies – except the salaries for LGA employees – are housed under the care of the Commissioner for Local Government and Chieftaincy.

According to a source from the Bauchi government, only monies for salaries are transferred into the accounts of the caretaker committees on a monthly basis. “Even the bank transfer fees are paid by the LGAs”

The Governor’s men in turn will turn the remainder of the LGA funds into their personal slush fund. According to an official ministerial briefing by the Commissioner of LGAs and Chieftaincy on the two-year marker of the Governor’s administration, the LGA funds were utilized for questionable items that were not necessarily items under the purview of LGA. The items were overly inflated.

See Commissioner’s Report on how the LGA monies were expended: 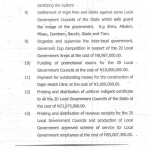 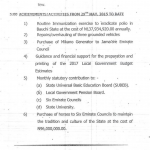 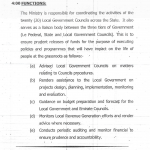 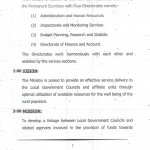 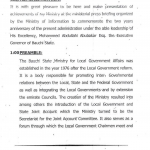 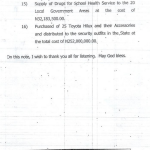 According to the documents attached above – detailing the usage of LGA funds over the course of the two years [2015 and 2016], N96million was used for the purchase of Horses for six emirate councils. It used N276million for immunization and N72.9million was used certificates. Another N55million to print uniform certificates. N32.2million to supply drugs to schools, and N252million to purchase and supply 25 Toyota Hilux pickups to security outfits.

In addition to what appears a flimsy appropriation report above, the Bauchi Governor employed the services of a firm, Cascada Global Services Limited belonging to Ambassador Munir Lawal Mohammed – a close friend to the Governor from Kano State. The firm which has an official corporate address at Plot 759 Bassan Plaza, Central Business District in Abuja was awarded the contract of collecting Internally Generated Revenues [IGRs] – and to perform biometric services for the LGAs.

Cascada has since collected N85million as consultation fee every month. Of which, sources within the Bauchi government revealed to 247ureports.com that the consultation fees are shared between the Permanent Secretary [Ahmed A. Misau], Local Government and Chieftaincy [Sama’ila Muhammad],  Ambassador Munir Lawal Mohammed and the Bauchi Governor.

According to the Federal Ministry of Finance, the total sum allocated to the 20 Bauchi state LGAs oscillated between N2billion to N3.5billion monthly – equivalent to N48billion to N84billion in two years.

Interestingly, the Bauchi Governor who had recently defended the N13.75bilion received from the Paris Club Refund fund as being the right of Bauchi State – and rightly belonging to Bauchi State, has in turn denied the 20 LGAs the same rights – by taking control over the monies belonging to the LGAs.

During the last Salah celebrations, unholy deductions was made from LGA funds by the aide to the Bauchi Governor. Out of the deductions, N20million was given to Hon. Yakubu ‘wowo’ Abdullahi – a lawmaker at the Bauchi State House of Assembly. A source places the total amount deducted at 450million.

Also, the supposed consulting firm, had been allowed to make deductions under the National Housing Scheme – every month. But none of the deductions are remitted back to the Bauchi government.

The Permanent Secretary, Ahmed A. Misau, according to our source has become “very rich and buying houses in Kano everywhere” owing to his unfettered access to the LGA funds.