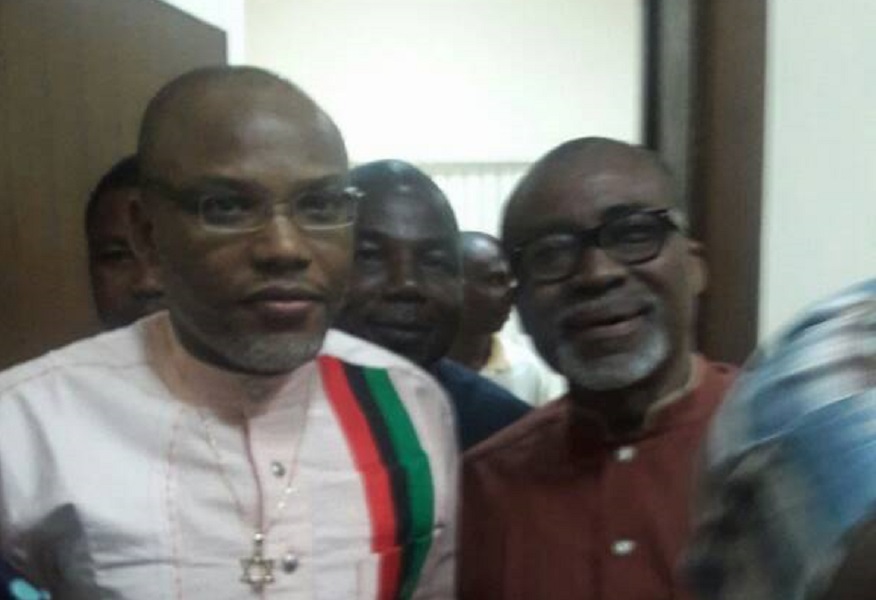 South east senators were reportedly taken to task by some of their colleagues for giving tacit support to the Indigenous People of Biafra (IPOB), Daily Trust has gathered.

The accusations were made at a closed session when the Senate reconvened yesterday after an extended annual break.

At the end, however, the main blame was heaped on the chairman of the South east caucus, Senator Enyinnaya Abaribe (PDP, Abia) for standing surety for the IPOB leader, Nnamdi Kanu, the sources said.

A Federal High Court, Abuja in April, set stringent bail conditions for the secessionist leader who is being tried for treason and Abaribe stepped forward to stand surety for him.

This was followed up by a high profile visit to Kanu on his release by a group of National Assembly legislators from the South east led by Deputy Senate, President Ike Ekweremadu.

But at yesterday’s session that lasted for about two hours Abaribe was criticised by his colleagues some of who described his action as “un- senatorial.”

The session chaired by the Senate president, Senator Bukola Saraki, started at 10.51am and ended around 1.pm with the Northern senators engaging their south east counterparts over IPOB and military actions in the south east.

A source told Daily Trust that the session was kick started with a briefing by Abaribe on IPOB and the intervention of the military in the south east geopolitical zone.

“He painted a bad picture of the intervention of the military in the south east but as soon as he finished talking, a former governor from the North stood up and requested that the military be invited to give their own side of the story.

“But the suggestion did not scale through because many senators did not accept Abaribe’s account in the first place,” he said.

Another Senator said it was after his briefing that some senators asked him (Abaribe) why he stood as surety for Kanu when he knew too well that he (Kanu) was against the unity of the country.

“Abaribe explained that he did that because the judge included a serving Senator as one of the sureties. He also said that the senator representing Kanu’s constituency, Senator Theodore Orji, was not around as at that time.

Another source said a senator from the North east during the session raised issue on recent comments by Saraki that the proscription and declaration of IPOB as illegal.

Our sources also said the anticipated showdown with Saraki was averted after the Senate President succeeded in calming frayed nerves during a closed day session ahead of plenary.

There were fears ahead of the Senate’s resumption that the first day might be stormy because some senators had perfected plans to ask for clarification as to why Saraki responded the way he did on the proscription of IPOB by the Federal Government.

A senator, who spoke in confidence, said Saraki used the closed-door session and consolidated the last week outreach he undertook to senators from all the geopolitical zones ahead of resumption.

“Of course, some senators from the South East were reluctant to align themselves with the position of the South East governors for political expediency; and when Saraki said IPOB’s proscription was unconstitutional, many believed he said it in solidarity with the South East senators, who form part of his support base.

“But that is not totally correct; there is the issue of national interest because, we too from the North have the interest of our constituents at heart. Many of them thought the Senate is against President Buhari and this is a wrong perception.

“Therefore, we all spoke during the closed-door meeting and at the end of the day, it was agreed the issue should not be debated in plenary because what needed to be done by various stakeholders have been done. The South East governors have spoken, Saraki had asked for due process to be followed and the Federal Government did the needful. At the end of the day, the court had decided. We felt it was a win-win situation and therefore there was no need to go and strip ourselves nicked in the market,” he said.

Efforts to speak to Senator Abaribe was unsuccessful as he neither answered his calls nor replied to the text message sent to him last night.

Giving report of the closed session, Saraki said at the meeting they resolved that the unity of the country was not negotiable.

The three point resolutions go thus: “The unity of Nigeria is not negotiable and we are fully committed to the territory integrity of the country.

“We will seek all possible avenues to make sure that peace reign across the country.

“Advise all groups that are pursuing one agitation or the other to do so through constitutional means.”

In his speech to welcome his colleagues from the annual recess, Saraki urged his colleagues to stand for the unity and indivisibility of the country.

“We must condemn in the strongest possible terms all forms of violence as a form of engagement. The Constitution and laws have laid down tools and procedures for us to push through our interest as all democratic nations do.

“Our nation is blessed with exceptionally talented and beautiful people, we are collectively strong and indomitable and it is time for all of us to stand up for our nation. Our dream of a virile nation must keep us motivated and this dream is already at the horizon,”he said.

Reps to meet stakeholders  over secession

The House of Representatives has resolved to send a “strong committee” to meet key stakeholders from the six geopolitical zones of the country,over secession agitations.

The committee is to seek practical solutions that would ensure Nigeria’s continued unity.

Similarly, as part of moves to douse tension in the country, the House resolved to immediately revisit the issue of devolution of powers in the interest of Nigeria’s unity.

The House in July, during voting on constitution review, rejected a clause seeking devolution of powers from the federal to state governments.

Adopting a motion by House Leader, Femi Gbajabiamila (APC, Lagos) yesterday, the House said different agitations across the country led to divergent views on the suitability of redefining the structures upon which the unity of Nigeria rests.

“These agitations have resulted into proscription of groups, loss of lives and judicial pronouncements,” the House noted.

The lawmakers said events of the last few weeks brought Nigeria close to a precipice but for the determination of Nigerians in their various show of commitment to the peace and unity of the country.

Meanwhile, the Senior Special Assistant to the President on National Assembly Matters (House of Reps), Suleiman Kawu Sumaila said in a statement that the lawmakers’ action was an act of patriotism.

“May I use this opportunity commend the 360 members of the House for unanimously passing a resolution to work for the unity of Nigeria in the face of daunting challenges and threats by certain groups, who are bent on causing disharmony and disunity among Nigerians. Indeed, there is no better time to come out with such a strong position like now.

“In the same vein, the lawmakers’ resolve to work with Mr President for one Nigeria so as to take the country to the next level of development is laudable. It is our hope and belief that the House would continue to work hand-in-hand with the Executive to achieve the laudable programmes and positive of this administration.

“I wish to assure the lawmakers, under the leadership of Mr Speaker, Rt. Hon. Yakubu Dogara, that Mr President remains resolute and committed to bringing the change he promised Nigerians in different facets of our lives. Thus, he needs the support of the House to achieve this.”