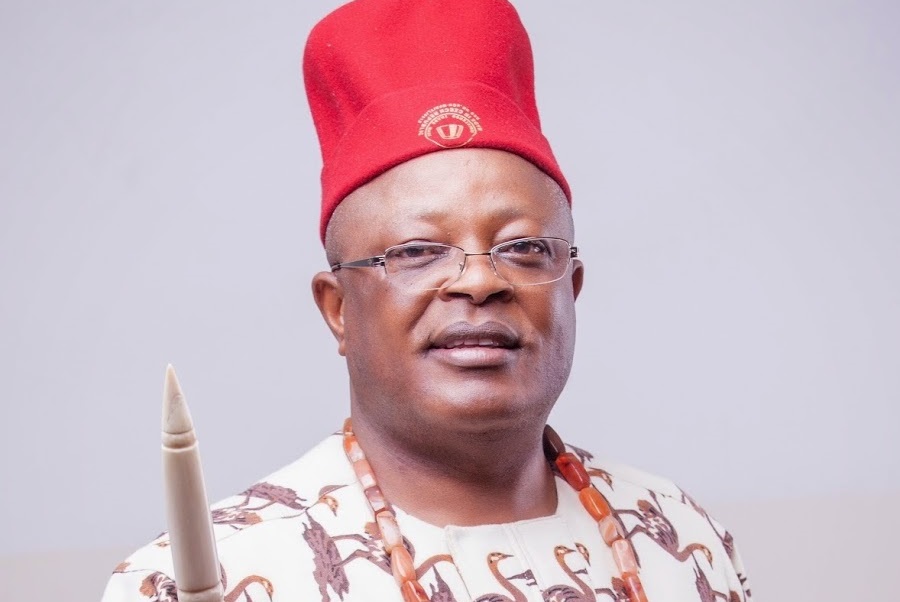 Chairman of South East Governors’ Forum and Governor of Ebonyi State, Mr David Umahi, yesterday, stated that the South-East governors have concluded arrangements to re-absorb, rehabilitate and empower youths who were misled by the agitation of the Indigenous People of Biafra, IPOB, in the country.

This came as the  Biafra Zionists Federation, BZF, has vowed that Chief of Army Staff, Lt. Gen. Tukur Buratai,  will  end up in prison over the recent deployment of troops in Abia State. David Umahi, Okezie Ikpeazu, Willie Obiano, Rochas Okorocha and Ifeanyi Ugwanyi This is even as  Anambra State government and a Senior Advocate of Nigeria, SAN, Professor Ilochi Okafor, disagreed  on the issue of Biafra during the commencement of the 2017/2018 Anambra State legal year.

Governor Umahi , who spoke during the Ebonyi Peace Day celebration at Ezillo, in Ishielu Local Government headquarters in the state directed the Commissioner for Economic Empowerment and Job Creation, Uchenna Orji, to begin the immediate compilation of the names of the youths with a view to assisting them become self-reliant, economically self-sufficient and meaningful to the society.

Umahi further stated that the proscription of IPOB has helped in saving the lives of over 12 million Igbo and foreigners across the country, stressing that the importance and sanctity of human lives cannot be over-emphasized. He expressed dismay over the methodology being used by the IPOB to achieve their mission, adding that it was wrong for the agitators to start abusing other ethnic groups in the course of their agitation.

The  governor appealed to the Ezza-Ezillo communities to do their best by ensuring lasting peace in their communities as the state government was committed to the peace and development of the area. Highlights of the occasion included  the final signing of the peace agreement between Ezza and Ezillo communities, release of peace symbol (pigeons) by the governor and dance and band performance by both parties.

The Biafra Zionists Federation also warned the Enugu charismatic Catholic priest, Rev. Fr. Ejike Mbaka, to be careful over his alleged sabotage of the Biafra struggle. BZF leader, Benjamin Onwuka, said that all the people who were involved in the deployment of troops to Aba and Umuahia will pay a heavy price over the deaths. Onwuka said “banning IPOB will not affect restoration of Biafra. It is a waste of time; IPOB is just a group, Biafra is a country. You cannot ban a nation, which came into being in May 1957. So, banning IPOB is simple waste of  political time.”

On the army invasion of Abia State, the zionists said: “It is clearly a tragedy. It is clearly a military invasion; it has nothing to do with IPOB or Nnamdi Kanu. This is the North invading the East because of Biafra. I want to deeply condemn the act. He said: “The statement from Lai Mohammed is rubbish and I am telling him today that he will face ICC over the killings in Abia. “We are as well calling on the Northern religious leaders, the Sultan of Sokoto and the Emir of Kano to call President Buhari and the Army chiefs to order.

“They should order them to withdraw these troops and rampaging herdsmen from Biafra land.”

On Fr. Mbaka, he said: “It is regrettable that our church leaders, especially the notable ones,instead of supporting Biafra, are busy using words that do not in any way reflect what is happening. Look at the killings in Abia, have they said anything? “The Zionists are warning Ejike Mbaka that he is putting his adoration ministry on the line. All the clerics supporting these killings will be sent away from here by the Biafra government and we will take over that his adoration ground.”

While the Anambra State Commissioner for Justice and Attorney-General, Mr. Anali Chude, described IPOB as enemies of the state for calling for a boycott of the November 18 polls in the state, a Senior Advocate of Nigeria, SAN, and former Vice Chancellor of Nnamdi Azikiwe University, Prof Ilochi Okafor, said IPOB had the right in law for agitation.

Chude, who urged the people of the state to go out en emasse on November 18 to exercise their franchise without fear of any molestation, described those who called for the boycott of the election as enemies of the state who wanted to plunge Anambra State into chaos by directing that elections would not hold in the state. The Attorney General said:”It is the stand of the state government that election must hold in Anambra State. We shall stand up to the occasion and refuse to allow people who do not wish Anambra State well to drag us to a situation whereby we will be turned into the guinea pigs in the Nigeria polity.”

But Prof Okafor argued that demonstration towards the right to self determination was recognised as fundamental rights in international law and the United Nations Charter, adding that the military had no role to play in quelling civilian demonstration where the police had not failed. According to him, the Igbo had faced and lived under pogroms and threats of extermination for 100 years in the country. He said: “There is nothing like military democracy. It is democracy pure and simple; it is where the practice of rule of law, as well as security and welfare of citizens are paramount, without discrimination of tribe, religion, sex and ethnic origin.

“Armies do not arrest civilians. Police do. Armies are not sanctioned against a peaceful people, or demonstration. Armies intervene where it is beyond the police, against insurrection, terrorism, and external aggression.”

Governor Okorocha stated this at a two-day first Women Gender and Young Workers conference, organised by the Nigeria Union of Local Government Employees, NULGE, in Owerri. He mentioned agitations by IPOB as a proof  that youths had been neglected.

He said: “I am happy because I love you. I am happy because I believe that the local government is the closest government to the ordinary person in the street. “I have seen women in Nigeria struggling for recognition and I see misrepresentation of women in the society and the failure to give women responsibility is why things are going the way it is in this country.

“This country has neglected the women and youths. Imagine the IPOB, they are not people of my age. It is time to engage the youths of this country. “Let me say this, we must go back to agriculture. And there is no system more qualified to talk about agriculture if not the local government system. I want this conference to include agriculture in their agenda.” Operation Python Dance is to ensure a united country.

Meantime, General Officer Commanding, GOC, 82 Division of the Nigerian Army, Major-General Adamu Abubakar, yesterday, in Oba, Idemili South Local Government Area camp of  the Operation Python Dance II, said the exercise is not about  anybody whatsoever, but to ensure a very united country where everybody will be safe.

He said the police gave the reports of crime in the Anambra State and the army looked at the analysis of crime in the last two months in the state and it became very necessary that the army steps in to assist, and since three weeks now, the level of crime has drastically gone down.

He said: “The Nigerian Army will always respect human rights, as it is enshrined in our Rule of Engagement, and also the code of conduct for which every soldier has a copy. Human right is there and we just have to respect it, as we are doing. We also urge the press to report exactly what it sees.

“We should not be sentimental about things; we should look more at the national interest, rather than personal and parochial interests, when dealing with security issues.” He said they decided to locate the camp at Oba because of the space that abounds in the area, “there is no particular consideration, but the soldiers particularly, the young ones were brought here to see how it is done in internal security outside the barracks, that was why we chose this place and am sure you can see the layout.”

“While we are teaching we are also training and that is what is going on, here, there is no particular preference; it could be any other place other than this place.”

The GOC who earlier commissioned the reconstructed Onitsha Military Cantonment gate, two water boreholes of 48,000 gallons capacity, built inside the military cantonment by the Nigerian Army headquarters, said that the projects were to assist the soldiers to be responsive to their duties anytime they are called upon to do so”.