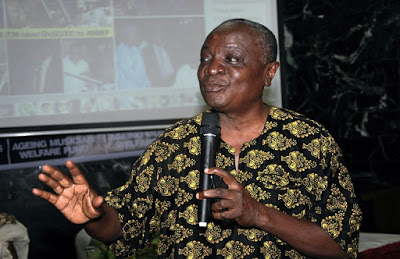 One of Ghana’s God Fathers in Ghanaian music and the King of Ghanaian highlife music Nana Ampadu has disclosed that Ghanaian have lost their cultural sense and also their traditional dressing.

Speaking to Dr Who on Hot and Classic showbiz review last Saturday on Hot 93.9fm;

He stated that most Ghanaian have lost their sense of culture, that is why they prefer to wear Language), and also eats foreign food.

The founder of African Brothers Band stated that Ghanaians claim they have independence yet the foreigner still convince us to wear their dresses, eat their food and practice most of their culture.

“Ghanaians always to prefer eating foreign food at the expense of ours”.

Nana Ampadu of Ghana formed his African Brothers Band in 1963 as one of the many guitar-based highlife groups that rose in Ghana in the ’60s. The trademarks of the group are their adherence to performing only their own songs (as opposed to the common practice of simply covering other groups’ compositions), as well as putting forth a political message within each of their songs. During the ’70s, they became one of the more innovative bands on the scene, as they experimented with influences from other areas, including the rumba, reggae, and a form of music meant to incorporate all of the African forms, Afro-hili, which was also made as a competitor to Fela Kuti’s Afrobeat.

After some time, they have returned to a purer form of guitar highlife, though hundreds of albums (mostly in Ghana) can attest to their longevity and creativity.