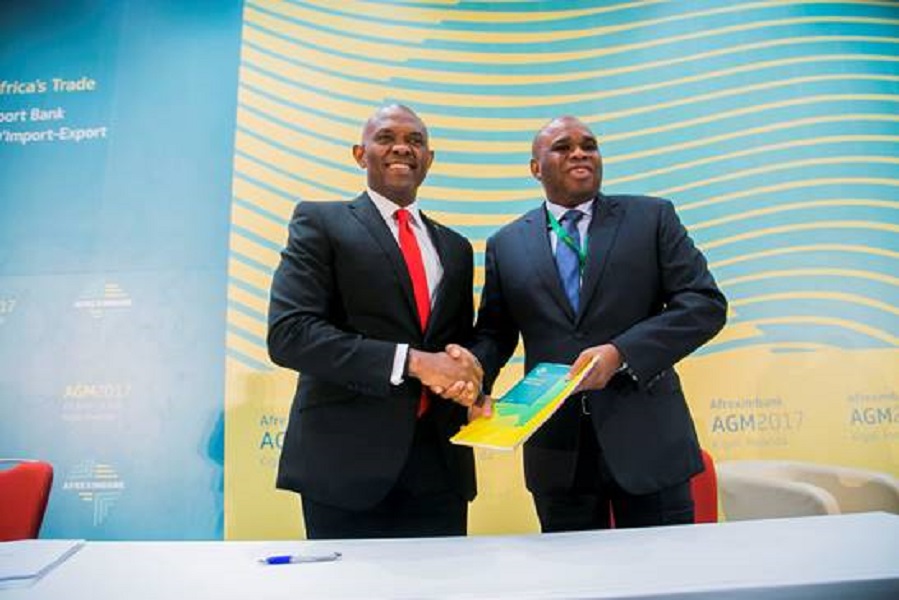 At the 24th Annual General Meeting of the African Export-Import Bank (Afrexim), held in Rwanda, Tony O. Elumelu, CON, Chairman of Heirs Holdings and the Tony Elumelu Foundation, congratulated Afrexim for the critical support that the Bank, led by President Oramah, provides for African businesses and its significant contribution to the development of cross-border trade and investment in Africa.

Mr Elumelu highlighted the role of African institutions, such as Afrexim, commenting that the Bank’s mission was further evidence of Africa’s own ability to provide long-term, strategic financing to Africa’s economic and social development. “Afrexim brings a unique and highly relevant perspective to the challenge of supporting intra-African trade flow and ensuring value is created in and exported from our Continent” said Mr Elumelu. “I urge other development finance institutions, particularly the Bank’s African peers, to follow its example in providing transformational forms of funding to African businesses.”

Mr Elumelu spoke on the topic “Cross-Border Investments as a Driver of Intra-African Trade and Industrialisation: Reflections from a Continental Business Leader”, where he championed the agenda of the private sector, as the keycontributor to Africa’s ability to attract and implement sustainable investment. Mr Elumelu, who created Heirs Holdings, cited his own approach to long-term investment in critical sectors, such as power, finance and resources, across twenty African countries. According to Mr Elumelu, Africa must grow cross-border trade and investment, and attract both local and international investors.

“An investment is not just about profit and returns. It is also about sustainability,” he explained. “What I want to see is Africans investing in Africa. We appreciate and welcome partnerships, but there is a generation of African businessmen and women, who have the capability and ambition to lead and transform Africa’s future. Let your money work in Africa”.

Elumelu also highlighted the importance of entrepreneurship. “We know the challenge and potential of Africa’s demographic explosion. That is why the Tony Elumelu Foundation is catalysing 1,000 entrepreneurs each year, with the objective of assisting 10,000 entrepreneurs over 10 years. Invest in the future, our youth,” he told delegates.

The meeting also witnessed the signing of a US$100million facility between Afrexim and Heirs Holdings. This initial transaction, between Heirs Holdings and Afrexim, was, said Elumelu, “Just the beginning and a clear indication of the intent and capacity of both parties to identify means to grow Africa’s wealth and create sustainable business opportunities over time. We welcome this and hope this serves as an example to others”.

Mr. Elumelu tasked more African Development Institutions to fund intra-Africa trade and businesses in a manner which will boost and embolden African business leaders and facilitate the further development of Africa’s economy. The $100 million facility is to further support Heirs Holdings cross border investment programme. Heirs Holdings Limited is a pan African investment proprietary holding company with a portfolio of investments in 20 African countries, in key sectors of the African economy – Energy, financial services, real estate and hospitality. Elumelu commented further that support from African DFIs like the Afrexim bank are often symbolic – being less about the size of the cheque and more often because such support acts as a catalyst to other providers of investible capital.

Mr Elumelu concluded by calling for African leaders doing businesses across borders, to build legacies and focus on corporate governance, while building businesses that last. “It’s all about legacy. We need to think about how history will judge us,” he stated.

Themed “Trade and Economic Transformation”, this year’s Afrexim Annual General Meeting gathered level leaders from the public and private sectors, African Ministers of Finance, Trade and Investment, Central Bank Governors, Senior Government Officials, in a series of panel discussions to grow intra and extra-regional trade in Africa. The Meeting was opened by His Excellency, Paul Kagame, President of the Republic of Rwanda who invited Africans present to invest in Rwanda. Other guests at the event included H. E. President Olusegun Obasanjo, Former President of the Federal Republic of Nigeria; John Rwangombwa, Central Bank Governor of Rwanda and Alhaji Aliko Dangote, Chairman, Dangote Group.