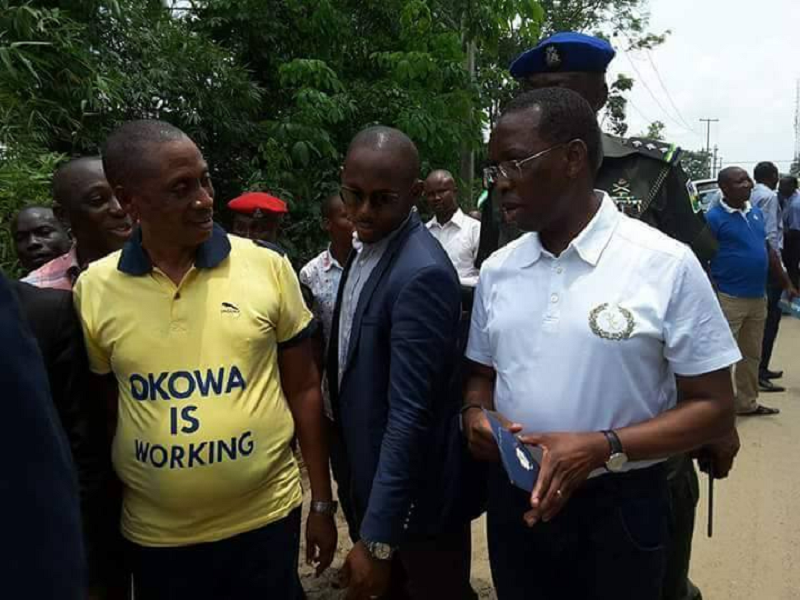 Civil servants in Delta State are presently in anguish as the state governor, Ifeanyi Arthur Okowa, has denied civil servants their wages, leaving them to sustain their families, pay hospital and Benin Electricity Distribution Company (BEDC) bills, ward’s examination fees among others from borrowed monies, at the mercies of money lenders with heavy interest rates.

While he pays his political appointees promptly who obviously have no defined job specification to the detriment of the state workforce whose jobs are clearly spelt out by the civil service rules and guidelines, Okowa also uses his office to empower his political associates and cronies with state resources.

A top civil servant in the state who spoke with 247ureports.com under condition of anonymity for fear of being marginalized said, amidst the cry that there is no money, yet, political appointees tops government payroll before the civil servants who does the bulk of the work are considered.

“I am indeed very surprised that a governor who claimed has a lot of experience and goes about telling people that the state resources are been used prudently could stoop so low to attend to the needs of appointees before the civil servants”.

“We do the bulk of the work with which he takes glory and not the political appointees who he services first before us. Some of us have borrowed up to our necks from the various cooperatives that we belong to and have gone out of our ways to money lenders just to see that there is food on the table and to pay off bills”.

The civil servant noted, “I must tell you the truth some of us who are at the top in the civil service ranking even find it difficult not to talk of those in salary grade level 10 and below. Each time they come to me and say Oga, hungry dey, I weep when they are gone because whatever I give them especially during the weekends cannot sustain them”, our source lamented.

Another civil servant (name withheld), disclosed that the landlord has been on his neck since the month of June ended, lamenting that a Court Order has been served him by his property owner who has threatened to use the police to evict him and his family.

“As I am talking with you, my landlord has given me a notice to quit my apartment before the end of this week. He served an Order from the Court, I have even sent people to appeal to him on my behalf but the man is resolute. I don’t know my fate now unless salaries are paid”, the civil servant bemoan.

Meanwhile, Delta State governor who proceeded on a 15-Day leave as part of his annual vacation which was planned on his birthday has set aside a whooping sum of N200 million for the leave and to celebrate his 58th birthday with his family during the arranged vacation, 247ureports.com can authoritatively report.

Investigation revealed that Okowa has not only gone on leave but has decided to throw a jamboree to mark his birthday with his family and other political associates as people like the former Political Adviser to the former governor of the state, Dr Emmanuel Uduaghan, former aide to Senator Ali Modu Sheriff and sacked Delta Central Senator, Chief Ighoyota Amori has visited him.

Okowa who is on a 15-day birthday jamboree, 247ureports.com learnt took his Principal Secretary (PS), and Killer squad leader, de facto Deputy Governor and Secretary to the State Government (SSG), Hillary Ibegbulem, some top government functionaries including the Chief Press Secretary (CPS) Mr Charles Ehiedu Aniagwu along with him with state resources.

Sources at Government House confided in our correspondent that though the Deputy Governor, Mr Kingsley Burutu Otuaro, has been given powers to act, 247ureports.com can authoritatively report that Okowa has strictly warned his Deputy never to approve the payment of workers’ salaries till he returns.

The governor who left the shores of the country since Monday June 26th is billed to return and resume work onWednesday July 12th 2017 and would go on another leave within the year.

An impeccable source said two days prior to the leave of the governor, his Principal Secretary, Ibegbulem had a meeting with the Deputy Governor in his office which lasted for several hours while quests billed to meet with Otuaro waited impatiently.

Read part of his letter which he transmitted to the Delta State House of Assembly Speaker, Mr Sheriff Oborevwori, “I send warm greetings to the Right Honourabe Speaker, and write to intimate the Honourable House, that I would be proceeding on 15 days leave which will form part of my 2017 annual vacation from Monday, June 26 to Wednesday, July 12, 2017, while the remaining part of my annual leave will be enjoyed later in the year”.

“In accordance with Section 190 (1) of the Constitution of the Federal Republic of Nigeria, 1999, as amended, His Excellency, Barr Kingsley Otuaro, the Deputy Governor of Delta State, shall perform the duties of my office as Acting Governor during the period of my absence on leave.”