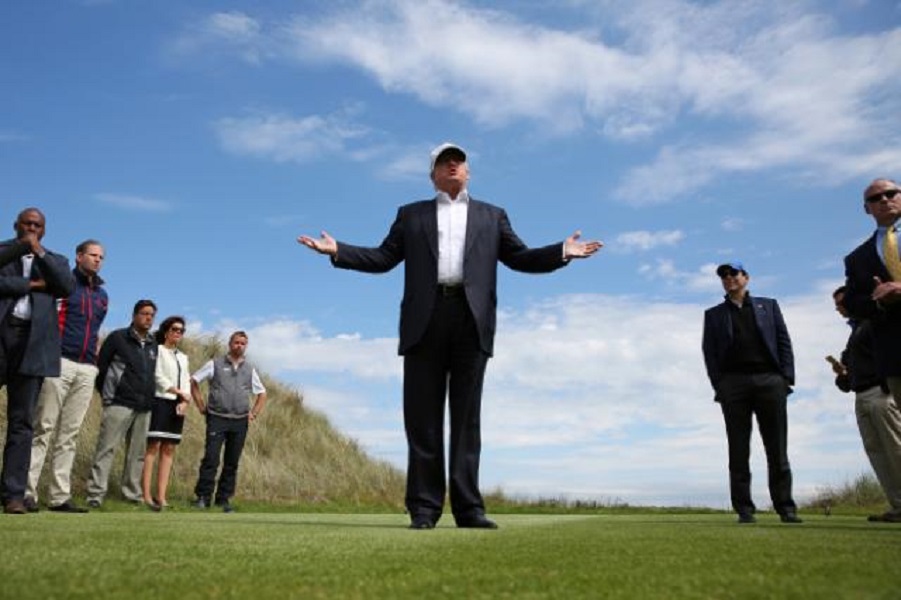 The Trump Foundation came under heavy scrutiny during Donald Trump’s 2016 presidential campaign. David Farenthold of The Washington Post even won the Pulitzer Prize solely for his reporting on Trump’s charitable (mis)givings, which included using $20,000 of his foundation’s money to purchase a portrait of himself. After the election in November, the Trump Foundation admitted to violating a legal prohibition on “self-dealing,” or using money meant for a nonprofit to benefit its leader.

Such shady practices apparently weren’t limited to his own charity. According to a report released Tuesday by Forbes, once his son Eric’s charity golf tournament started raising a substantial amount of money for St. Jude Children’s Research Hospital, which specializes in pediatric cancer, Trump began charging for the use of Trump Organization golf courses, and, ultimately, funneling the money the tournament raised into other charities that benefited Trump’s business interests.

Eric Trump, who first hosted the Eric Trump Foundation golf invitational in 2007, has always maintained that he is able to hold the event on Trump Organization courses free of charge, and that much of the food, drinks, entertainment and equipment is either comped or paid for by sponsors. According to tax filings obtained by Forbes, the event expenses averaged around $50,000 for each of its first four years.

Then, in 2011, the cost rose to $142,000. This was allegedly because Trump learned that the course was being used without charge, and became upset. “Mr. Trump had a cow,” Ian Gillule, a former membership and marketing director at Trump National Westchester, told Forbes. “He flipped. He was like, ‘We’re donating all of this stuff, and there’s no paper trail? No credit?’ And he went nuts. He said, ‘I don’t care if it’s my son or not—everybody gets billed.'”

Trump then essentially laundered money through the tournament by having his foundation donate to his son, in order to cover the event fees that the Trump Organization was now being paid. From Forbes:

“In effect, though, this maneuver would appear to have more in common with a drug cartel’s money-laundering operation than a charity’s best-practices textbook. That $100,000 in outside donations to the Donald J. Trump Foundation (remember: Trump himself didn’t give to his own foundation at this time) passed through the Eric Trump Foundation—and wound up in the coffers of Donald Trump’s private businesses.”

By 2015, the event’s expenses had reached $322,000. Forbes spoke with golf tournament organizers and the former head golf pro at Trump National Westchester, and no one could fathom how a one-day charity event could cost so much money.

In what seems to be a measure to ensure the Eric Trump Foundation could make as much money for the Trump Organization as possible, Trump installed his own people on the foundation’s board, which was initially made up of friends of Eric’s who had no financial interest in the Trump Organization’s success. The Trump associates added to the board included Trump attorney Michael Cohen and Trump social media director Dan Scavino Jr.

“They were wearing two hats,” Patrick Lanagan, a former director of golf at Trump National Westchester, told Forbes. “You’re dealing with people talking about the event and the charity who also at the same time are thinking about it as a corporation and as a business. It’s a for-profit club. You know, they’re trying to make money.”

Soon after the new board took over, large sums of money meant for St. Jude’s were rerouted to other charities run by associates of Trump. Forbes spoke with Eric Trump for the piece, but he eventually decided to “disengage” because he felt it was not going to be a “fair” portrayal. The Trump Organization “declined to answer detailed questions.”

The Eric Trump Foundation, in effect, became just another way for Donald Trump to make money. Whether the money was originally intended for kids suffering from cancer was irrelevant, apparently, to the man who is now the president of the United States.