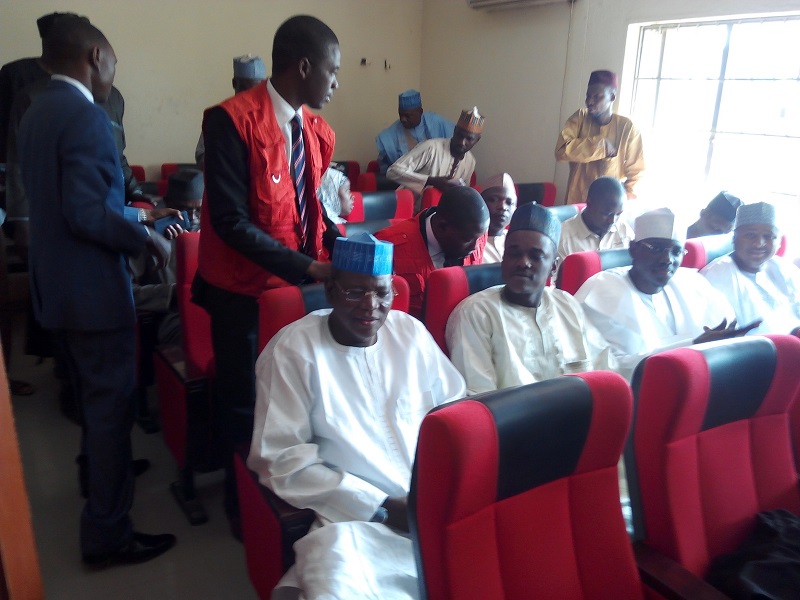 Justice Babatunde O. Quadri of the Federal High Court, Maitama, Abuja has adjourned to July 7, 2017 for ruling on a motion by the embattled former governor of Jigawa State, Alhaji Sule Lamido praying the court to return his case file to former trial judge, Justice Adeniyi Ademola.

Lamido, who is currently facing an amended 48-count charge of money laundering alongside his sons, Aminu Sule Lamido, Mustapha Sule Lamido; Aminu Wada Abubakar, Bamaina Holdings Ltd and Speeds International Limited,allegedly abused his position as governor between 2007 and 2015 by awarding contracts to companies where he had interest, using his two sons as fronts

In the course of his trial, Lamido had through his counsel, Offiong Offiong, SAN told the court that the Chief Judge of the Federal High Court, in transferring the criminal matter from Justice Adeniyi Ademola to Justice Quadri, had exceeded his powers.

According to Offiong, “The main challenge is not whether the CJ has powers to transfer cases. Rather, it is whether or not the CJ kept within the statutory boundary set out in Section 98 of the Administration of Criminal Justice, ACJA, 2015, before he exercised that power. There are conditions that are to be met before the CJ can transfer a criminal matter from one court to another.”

According to him, “the CJ did not keep within the bounds of that power; rather, he exceeded his powers and as such acted ultra varis.

He added that, “the law prohibits the CJ from exercising the power of transfer where witnesses have been called.”

Regarding the counter affidavit served by the prosecution, Offiong, opined that the prosecution did not follow proper procedure in complaining against the former trial judge, stating that, “If the prosecution is alleging bias against the former trial judge, the appropriate remedy would be to send a petition to the CJ, who in turn will constitute an independent body of not more than three reputable practitioners to look into it and give a report. In this case, the CJ’s power to transfer is subject to the outcome of that report.”

He urged the court to uphold his motion, stressing that the defendants have rights of freedom of representation, as well as a right to speedy trial, and that there should be no conflict between both rights.

Responding, prosecuting counsel, Chile Okoroma, insisted that the defence sought to “make the matter lie in limbo without progress while hiding behind the smokescreen of appearing to want a speedy trial”.

According to him, the defence was seeking a return of the case file to the former trial judge, Justice Ademola, as well as an order for accelerated hearing.

“My Lord, this court does not have the power and cannot grant the defendants the relief they seek. Only the CJ can do that”, Okoroma said.

Citing relevant authorities to establish precedence, Okoroma went on: “The defence relied heavily on Section 98 of the ACJA, 2015. However, provisions therein can only come into play in a proceeding where judge is sitting without intervening factors, and there are no issues as to likelihood of bias and the judge is not on suspension.

“In paragraphs 10 and 13 of our counter affidavit, facts presented are not controversial. It is important that the court takes judicious note of the fact that the former trial judge is still on suspension and his court under lock and key. As it stands now, the National Judicial Council, NJC, has not lifted his suspension, and the Honourable Justice is not sitting. Furthermore, there is no date available as to when he will resume.

“The independence and impartiality of the trial judge which is also emphasized in the constitution was also stressed by the defence counsel. The former trial judge and the defence’s lead counsel were tried together for corruption related cases. Though discharged and acquitted, issues have been raised of real likelihood of bias based on relationship between the judge and the counsel.

“Section 98 of the ACJA, 2015 is not sacrosanct in this regard. If the trial judge had resigned voluntarily or even died and witnesses had been called, the CJ cannot be barred from exercising his powers to reassign the matter”.

“The CJ exercised his powers during a period of suspension of the former trial judge and did not act ultra varis.”

“We oppose the defendant’s motion and urge your lordship to discountenance the defence’s application”, Okoroma submitted.

Justice Quadri, thereafter, adjourned for ruling on the motion.