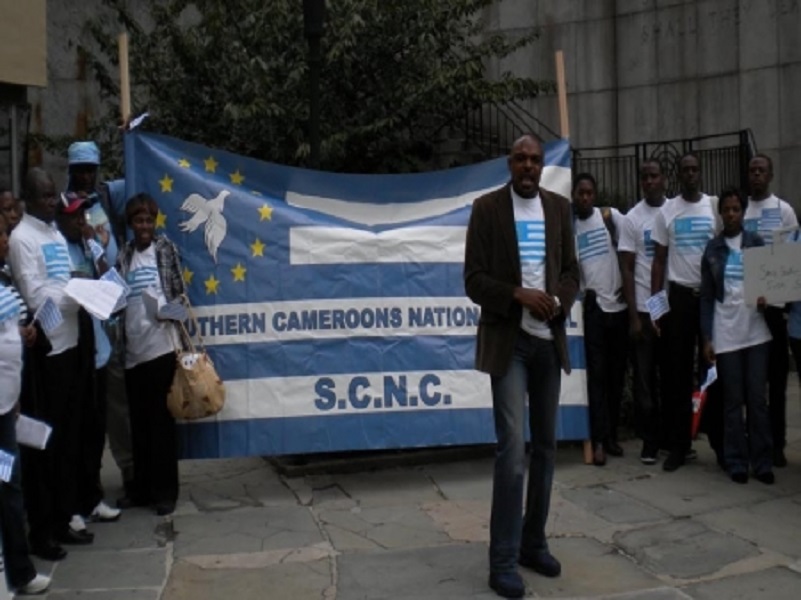 Fresh trouble appears imminent in the Republic of Cameroon as Southern Cameroon, an English-speaking people on Friday demanded restoration of their sovereignty.

They also raised the alarm over alleged planned genocide against their people by citizens of the Republic of Cameroon.

Specifically, the organisation directed the people of Southern Cameroons to henceforth completely boycott the celebration in the Republic of Cameroun and all subsequent festivities in the region.

According to them, the African Union, United Nations as well as the Economic Community of West African States, should intervene to restore normalcy to the area.

The text of the press briefing entitled: “About two million Nigerians at risk in neighbouring Cameroon”, read to journalists was jointly signed by the Coordinator of SCINGA, Dr Cornelius Kwanga; spokesperson, Sisiku Ayuk-Tabe and Chief Strategist, Dr Fidelis Nde-Che

The group said restoration of Southern Cameroon’s sovereignty would bring an end to the instability in the Bakassi Peninsula and the entire Eastern Marine Border Frontier which it said, was in many ways so critical and vital to Nigeria stability and economic development.

The territory, being the former British Southern Cameroons, also called Ambazonia, according to the group, was “illegally annexed by La Republique du Cameroun since 30th 1961 when she moved her troops and occupied the territory and imposed her governance in violation of the UN Charter, the UN Resolution 1608 and other international covenants that were binding on her as a UN member since 1960.”

SCINGA said it had decided to intimate the world about the situation in Cameroon, to possibly avert an impending disaster, waste of human life and valuable economic resources.

“This would be the inevitable consequence of an outbreak of violence. The people of Southern Cameroons feel, and rightly so, that they have reached the limit of trying to get the annexationist government of La Republique du Cameroun to resolve their crisis amicably through frank dialogue.

“Each time our people have stood up to protest against worsening conditions, the only response from the Yaounde Administration has been excessive brutality by the supposed forces of law and order.

“These people in uniform were sent to our territory where they systematically torture, rape, maim and abduct our people to detention centres in locations in French speaking Cameroon, far away from their families.”