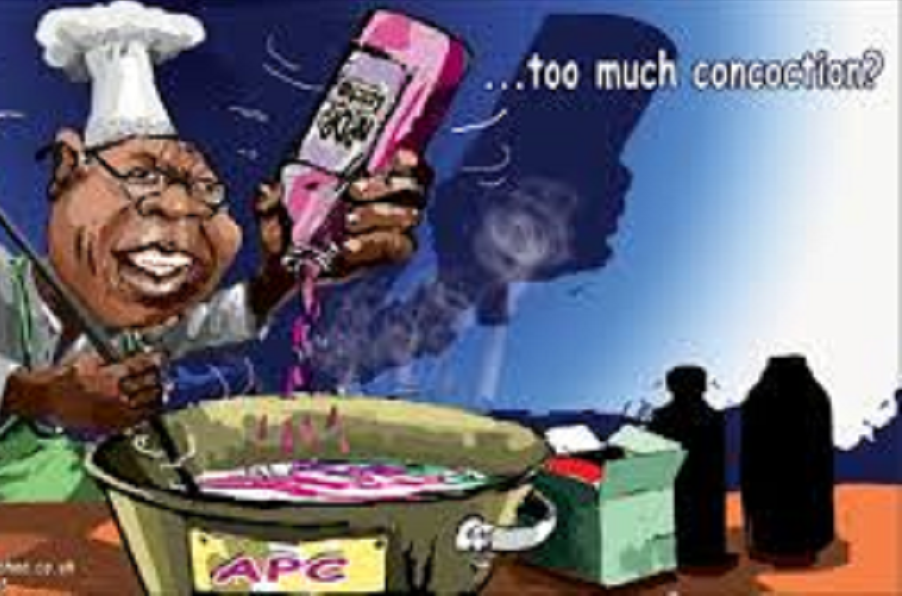 It is a new political season of sorts in Anambra State with all manner of political parties, groups/associations crawling out of the crevices to stake claims ahead of the November 18, 2017 gubernatorial election. To gain a share of voice, some have resorted to the boring tactics of picking at the symbols of the Chief Willie Obiano achievements in the last three years with the imposing flyovers as their main target.

Prominent amongst the wanna-be landlords of Anawbia Governor’s Lodge is the All Progressives Congress (APC) led choristers who have been shouting themselves hoarse in a futile attempt to explain their befuddled view and mission in Anambra. They have recently ratcheted up their loud-mouth strategy with the announcement of a “Take-Over Committee for Anambra.” The APC “Take-over” commanders include former Governors, Jim Nwobodo of Enugu State, and Orji Kalu‎ of Abia State; Sen. Ifeanyi Ararume of Imo State, Sen. Azu-Agboti from Ebonyi, Nkechi Nwaogu of Abia, Chief Nweke Gbazuagu of Enugu State and Chief Cosmas Madugba fro‎m Imo State. They are mandated to direct the APC blitzkrieg to ensure the capture of Anambra State, the Light of the Nation for the pleasure of their masters.

Evidently, none of the APC Commanders for the Anambra operation is from the state, thus lending credence to the growing feeling of the assemblage of an invasion force coming to upset the peace and stability enjoyed by Ndi Anambra in the past three years all in a bid to make it part of the APC fiefdom. More so, the antecedents and current strengths of each member of the team show apparent lack of touch with reality and appreciation of the resolve of Ndi Anambra not to be taken back to the years of the locust. It is therefore safe to conclude that the APC “Take-over” team for Anambra and their scheme is dead on arrival.

Presently two facts are crystal clear in the Anambra political sphere; that Governor Obiano’s stellar performance in ensuring the security of lives and property, his agricultural revolution that birthed the popular Anambra rice, infrastructural development beyond the new emerging Awka, and sustained workers welfare to mention but a few are widely acknowledged as good enough to earn him a second mandate come November 2017. The other fact is that the surfeit of candidates lining-up to contest against him in the up-coming election have an uphill task convincing Anambra electorates otherwise.

What is perhaps most baffling to many is that the APC’s record at the national level and indeed the twenty four states where it holds sway does not give the party any traction in Anambra beyond the loud sabre-rattling induced by its so called “federal might.” So what can these APC take-over commanders bring to their quest for Anambra?

A quick search-light on the team reveals a number of interesting facts. The seventy-seven year old former Governor of old Anambra State(1979-1983), Sen. Jim Nwobodo is perhaps the most illustrious of the team as a political son of late Nnamdi Azikiwe‎. But political strategists argue that the man who carries the baggage of the N100m Dasuki largesse with the EFCC’s probing eyes over his shoulder, may have been selected to re-enact his inglorious role in the betrayal of Chief Alex Ekwueme at the NPN 1998 Jos Convention. Someone may have to remind Jim that whereas the language in Jos was Hausa, no amount of gang ups can sway the gods in the Igbo heartland.

Another former Governor, Chief Orji Uzor Kalu is perhaps known for creating the mess of stagnation in Abia which was sustained by his protégé to the detriment of the people especially the residents of the now decrepit Enyimba city of Aba. A brash and street-wise freebooter with obvious credibility deficit‎, Orji also has the EFCC yoke over his neck, and his mercantile reputation never spared him from being severally out-foxed by his mentee, Sen. Theodore Orji leading to two consecutive defeats in Senatorial elections. Yet another case of playing the piper’s tune for survival, but someone needs to remind him that Anambra is in a different class.

Others are former Senators Ifeanyi Ararume, Azu Agboti and Nkechi Nwaogu. Whereas Ararume was recently appointed into the board of NCC, Agboti, the secretary of the group and Nwaogu are amongst the new paper-weight APC converts from the PDP. A businessman and politician from Isunjaba, Chief Cosmas Maduba, and Chief Gbazuagu Nweke Gbazuagu from Enugu state complete the list. One common denominator among these gentlemen and lady is that they were until few months ago members of the PDP whose history of brazen electoral heist over the years was felt at various levels. Perhaps, the APC wants to tap into the PDP expertise. But the big question to the APC and its converging squadron is, do you really think that Anambra State and its citizens are dumb?