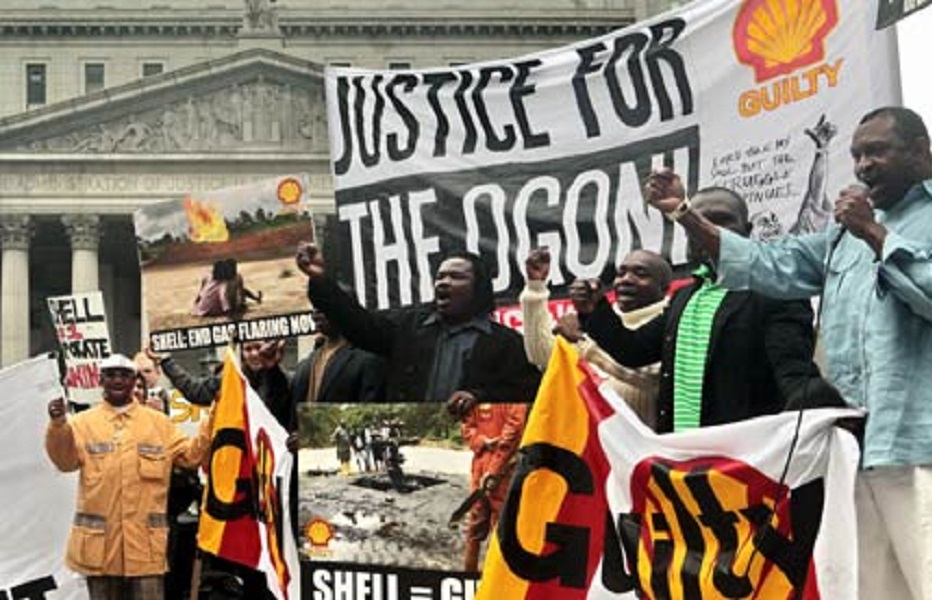 When in 1993, the Ogoni people embarked on the journey to redefine their future with a historic march involving over 300,000 people, little did they know that they were not only on a self-rescue mission but were to shape the life and future of the entire Niger Delta. The Ogoni struggle became an eye-opener to the nefarious and very repugnant ecological war of the multinational oil companies in the Niger Delta.

Government response was simply to sentence 9 outspoken Ogoni leaders to death by hanging. It would have been expected that the hanging of Ken Saro-Wiwa and eight others on November 10, 1995 was to end the Ogoni agitation, at least it was sufficient to put fear into everyone who dared to question the operations of the multi-national oil companies, and was expected to guarantee the resumption of oil production in Ogoni and cover up the massive human rights abuses perpetrated by the Nigerian authorities and Shell. against the Ogoni people. The Nigerian authorities had imagined that no one would further organize the Ogoni resistance after Saro-Wiwa.

In the face of the persecutions, the pains and miseries of the Ogoni people, Shell’s immediate response was to launch an Ogoni Re-entry programme –  a programme which re-enforced her policy of “Wasting Operations” prosecuted by Major Paul Okuntimo of the Nigerian Army with the sole aim of resuming operations in Ogoniland. The result was a complete devastation of the Ogoni society, a total disorientation of her civil order, forcing the people into exile and significantly frustrating their efforts to organize against state-sponsored terrorism. I salute the extra-ordinary courage of the Ogonis who managed, in the face of state sponsored terrorism, to sustain the ideals of the imitators of the Ogoni struggle.

On May 29, 1999, a civilian regime came into force in Nigeria bringing hope and relief. Unfortunately, the attitude towards the Ogoni did not change and continuous agitation for our rights had to be intensified under the leadership of The Movement for the Survival of the Ogoni People (MOSOP)

It is commendable that MOSOP continued to provide the leadership and organized the Ogoni resistance against this company (Shell) which has come to be known as one of Ogoni’s worst enemies.

Nigeria finally accepted responsibility to clean Ogoni and within the last five years, the issue of cleaning the Ogoni environment has generated much attention. Government has accepted to clean Ogoniland of pollution, some of which has lasted for over 50 years. While that is on-going, the government is also making efforts to re-enter Ogoni and commence oil business. Ironically, the government may be considering implementing the clean-up with the revenue derived from Ogoni oil. A rather absurd situation which points to a society that does not use her conscience.

The new “Shell” that has emerged is called the Nigerian Petroleum Development Company(NPDC). Incidentally, NPDC is owned by the Nigerian government. The NPDC claims it has taken over Shell’s oil wells in Ogoni after former president Yar’Adua had announced Shell’s exit from Ogoniland. What is not clear is how NPDC would claim it is an operator in Ogoni without the knowledge of the Ogoni people.

Furthermore, iit is shocking that in the midst of deaths recorded daily from pollution-induced sicknesses, an organisation like the NPDC could be so daft, claiming ignorance about the pathetic condition of the Ogoni, an emergency situation about a people that are dying by the day, yet the NPDC is busy negotiating a re-entry to resume oil business in the area.

The Ogoni people have made their position known on the issue of oil resumption and this has been well communicated by MOSOP. That: Oil production is non-negotiable until the cleanup is done. But beyond that, it is our right to choose and decide who takes our oil.

If Nigeria uses her conscience, the government, NPDC and Shell should see clearly that the Ogoni people do not want further trouble over her oil. But if they would not listen, we shall all meet at the oil fields. I am confident that the people will defeat the NPDC, her armies and their allies.

Finally, let it be known that the NPDC and her allies will be accountable for any Ogoni lives lost in the process.

Fegalo Nsuke is the Publicity Secretary of The Movement for the Survival of the Ogoni People(MOSOP). He wrote from Bori, Ogoniland.