Advertisement
Ogbonna Casmir
With the intention to instill discipline and encourage children to study hard following the dwindling educational system in the country, proprietor of the Early Dew Montessori Academy, Mrs. Ify Okonkwo on Thursday 16th February, 2017 invited three policemen to the school to talk to pupils who come to school always dirty, those that are stubborn and those that don’t do home assignment.
This is not without consequences as soon after she uploaded the pictures of the policemen with the children at the school premises to the chat group, a media platform the school created to discuss with the parents what happened behind their back with their children; one of the parent Mrs. Nkem Beluchi shared the picture on her facebook account and tagged it ‘Enugu State Government Police in conjuction with Early Dew Montessori “primary” School GRA Enugu, arresting 4 to 7 year olds and putting the behind a hilux -thesame place they put dead bodies, and where they could have jumped out from fearfully- for not doing their assignments’.
Mrs. Beluchi’s post immediately igniting outrage as what was meant to solve problem now turned to threatening the existence of the school that is just five years (5yrs) old.
Apparently miffed by the incident, the Enugu State Government had last Monday suspended the operations of the school located at No 16. Imoke Street, GRA, Enugu.
The state Commissioner for Education, Professor Uche Eze, who visited the school, described the act as an embarrassment to the state government and a serious psychological abuse of the children.
Eze said the action would serve as a warning to other private schools in the area who adopted unethical practices in the name of punishment to students, and therefore directed the school authority to write an apology letter to the state government, parents of the abused children and the people of the state. 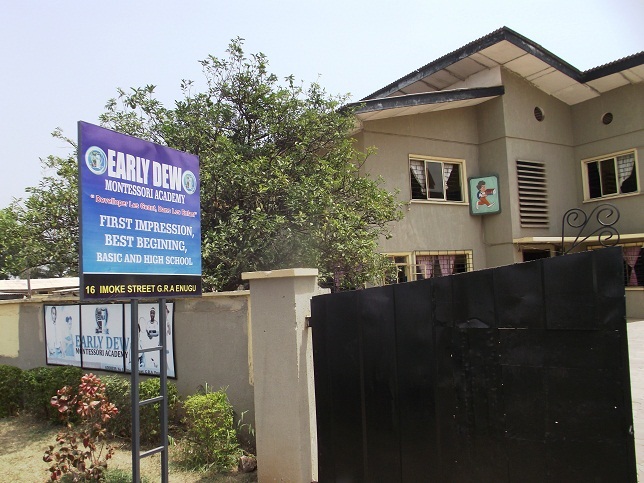 But, briefing journalists at the school premises, the Proprietress of the school, Mrs. Okonkwo, explained that the reported arrest of some pupils of the school who did not do their assignments and those whose uniforms were dirty was stage managed to instill discipline.
The proprietress, who confessed to not considering the implications of her action, said the pupils were asked to get into the back of the police Hilux Van where they pleaded to be of better behaviour.
Also, a parent who was part of the arrangement, Jesica Nnamani, appeared to further plead on their behalf leading to their immediate release.
“I want to thank the people of the state, especially Governor Ifeanyi Ugwuanyi and the Commissioner for Education, Professor Eze, for showing concern in this matter. I also want to thank the parents for their understanding. What happened in the school on February 16 was to encourage the children to be focused. I brought the police to come and talk to the children and to elevate them to read on their own without being pushed.
“In my mind I thought I was doing it to bring the children up in a way that they will be attached to their studies. No child was manhandled neither did they point a gun at any of the children. I was the person that took the pictures and we have a group chat I opened for parents as one family to brief them on the school’s activities. When I took this action, I posted it on the platform, with the caption, ‘some children were arrested today for not doing their homework, for not reading their books, for not behaving well, but they promised to change.’
“I didn’t mean any harm; I meant well for the kids, if not, I wouldn’t have made it public; it would have been between me and the teachers; also, when I uploaded it on the platform, parents were commending me.”
She however noted that while other parents were commending her action, one of them who had issues with the school uploaded the report of the incident on Facebook alleging that the state government in conjunction with the school arrested the pupils for not doing their assignments.
Corroborating the explanation of the proprietress, Mrs. Jessica Nnamani stated thus: “on that very day, I came to the school to attend to my sick son where the school ‘mummy’ told me what she was planning to do. Some of the pupils involved were looking very dirty so when the police came she told them that the police would take them away until they promised to be of good behaviour.
“Then I acted and said, school ‘mummy’ please don’t take them away, they will change. I said okay, are you people promising school ‘mummy’ that you will do well from now on? They all said yes!
“The people you saw on that van were people who weren’t serious with what was happening; they were rather laughing. They now took them behind the van; it was then they started begging.
“If I should say, she didn’t mean any harm. As a parent, I supported what she did. She did it in the interest of the pupils”.
Our investigations shows that the parent, Mrs. Beluchi who uploaded the picture on her facebook account was angered that two of her children who usually come to school dirty was used as experiment in the picture.
It was gathered that the school authority had in main occasion brought a barber to barb the heads of Mrs. Beluchi’s children in the school, because they would always look grimy.
Meanwhile the Commissioner for education has directed Beluchi to retract and apologies to the state government for the false impression and misleading information she created in her post that “The Enugu State Government Police” was involved in the act.
Meanwhile, efforts to get Nkem Beluchi to speak on while she choose to go social media to destroy or probably close-down the school prove abortive as she refused to answer calls placed on GSM phone.