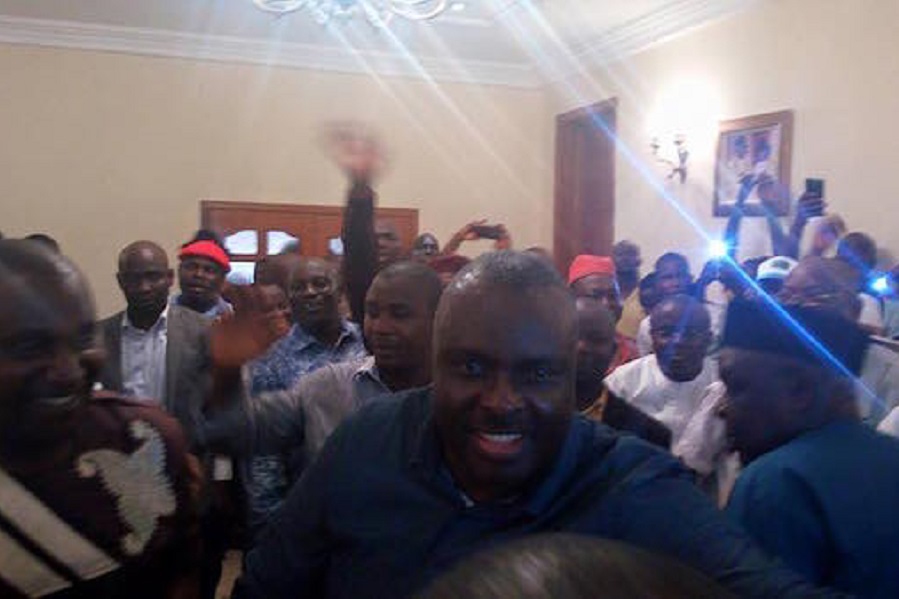 The former governor of Delta State, Chief James Onanefe Ibori has returned to Nigeria on board a British Airways flight that landed at the Abuja International Airport.

The British government in a statement said it deported the former governor having served out his 13 years jail terms in December for money laundering.

Ibori was received and booked by Department of State Service (DSS) officials popularly known as secret police at the airport as is the practice with deportees and was taken to the DSS headquarters where he met with Director-General (DG), Lawal Daura.

The British Government had accused him of stealing about $250 million from the Delta State Government part of which was used in buying six houses and luxury vehicles in the UK, the United States and South Africa.

The ex-governor had on Friday, appeared before a Southwark Crown court in London for hearing on his asset forfeiture.

Ibori told journalists outside a London court some days ago that he had asked his lawyers to appeal his conviction.

It was gathered that Ibori had arrived Oghara, his hometown where he is eagerly being awaited for by his relations and supporters.

Shortly after his release from UK prison, the former governor had promised he would return to Nigeria to continue his political career in Delta his home state and Nigeria at large.

The statement disclosed that British officials would continue the legal process to confiscate the proceeds of the former governor’s loot, which would then be returned to Nigeria.

The statement reads: “Having been jailed for his crimes in the UK and served his sentence, Mr. Ibori has now been returned to Nigeria. The UK will continue to pursue, vigorously, the legal process to confiscate and return to Nigeria, Ibori’s criminal assets.

The UK is determined to lead the way in a coordinated global effort to bring the corrupt to justice. That is why it was vital we sent a clear message to the world that James Ibori, a man who stole millions from the Nigerian Government and laundered those proceeds in the UK, has been held to account.

Mr. Ibori’s return would not prevent prosecutors from pursuing confiscation proceedings against him.‎”

The former governor was said to have been interrogated on his sojourn in the United Kingdom, UK, where he was recently released from prison.

During the “briefing” with the DSS director-general which took place at the head office of the secret police at Aso Drive, Abuja, it was gathered that Ibori was also asked about his plan in the country.

However, the privately chartered aircraft carrying the former Delta State governor landed in Benin, the Edo State capital, instead of the Osubi Airport, Osubi, near Warri and his country home at Oghara, where many of his associates and well-wishers anticipated his aircraft to land.

Politicians, top government functionaries, friends and associates of the former governor of Delta State, Chief Ibori, who are waiting for his return to Delta State, had besieged the Osubi Airport, Osubi, near Warri and his country home at Oghara, Ethiope East Local Government Area of the state.

At about 5:30am on Saturday, Ibori arrived Nigeria, from the United Kingdom where he had served a jail term.

He came in through the Nnamdi Azikiwe International Airport, NAIA Abuja in a British Airways Boeing 777 aircraft with registration G-VIID.