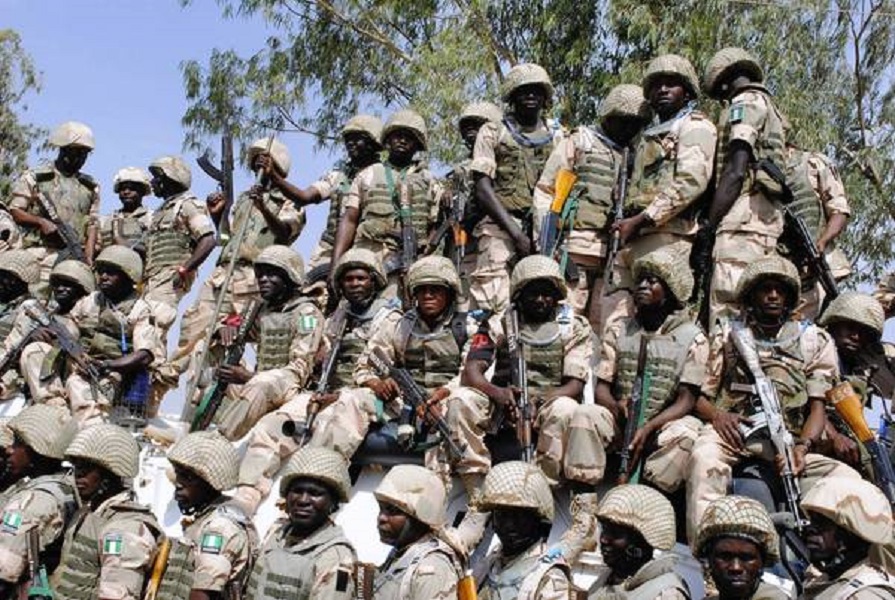 Advertisement
AS the saying goes, “the devil can quote Scripture for his own purpose.” That appears the intent of some senators on Thursday, January 19, 2017, when they went about interpreting simple and straightforward provisions of Section 5 of the 1999 Constitution (as amended), as regards the power of the President to declare war on another country or deploy troops outside Nigeria.
Senator Chukwuka Utazi had raised a “point of order”: That President Muhammadu Buhari had breached Section 5, subsection (4) of the Constitution, by deploying troops to The Gambia without seeking the permission of the two arms of the National Assembly.
(Section 5(1)(a)-(b), (4)(a)-(b) and (5) deal with the exercise of executive powers of the Federation by the President.)
Stressing that the President had, by his action, levied war against another country (The Gambia), Senator Utazi cheery-picked subsection (4)(a) of the section, to back his argument.
The subsection states: “The President shall not declare a state of war between the Federation and another country except with the sanction of a resolution of both Houses of the National Assembly sitting in a joint session.”
Coming to the aid of Senator Utazi, although he admitted that the President had not levied war against The Gambia, the Deputy Senate President (DSP), Dr. Ike Ekweremadu, noted that subsection (4)(b) was the operative part of Section 5, in dealing with the issue at hand.
The subsection holds that: “Except with the prior approval of the Senate, no member of the armed forces shall be deployed on combat duty outside Nigeria.”
From the adumbrations, which had the backing of many senators, who apparently were baying for action, it was clear that if the President escaped criticism (or censor) because, contrary to Senator Utazi’s assertion, he did not levy war on The Gambia; he couldn’t, however, dodge reprimand for deploying troops to the country without Senate’s approval, as per DSP Ekweremadu’s contention.
But the Senate President, Dr. Bukola Saraki, wittingly intervened by drawing the attention of both senators (and the entire chamber) to the proper and ordinary reading of Section 5(4) and (5) of the Constitution, pointing out the caveat (proviso) in subsection (5), which reads:
“Notwithstanding the provisions of subsection (4) of this section, the President, in consultation with the National Defence Council, may deploy members of the armed forces of the Federation on a limited combat duty outside Nigeria if he is satisfied that the national security is under imminent threat or danger:
Provided that the President shall, within seven days of the actual combat engagement, seek the consent of the Senate and Senate shall thereafter give or refuse the said consent within fourteen days.”
Which interpreted means the President has over seven (minimum) days and 21 (maximum) days’ grace period for his action. (Note that the length of time it takes the troops to get to the theatre of operations, before the “actual” combat engagement, is exclusive of the President’s seven days of reporting of and Senate’s 14 days for approval for the troops deployment.)
This proviso couldn’t be more explicit, yet Senator Utazi, and most of all, Deputy Senate President Ekweremadu chose a different line of argument. Was it lack of understanding of the Constitution or a deliberate misreading of its provisions to suit their purpose?
It’s curious that both senators are lawyers, and have longstanding legislative experiences, Utazi being a member of the Enugu State House of Assembly before joining Ekweremadu at the National Assembly. But curiouser is Senator Ekweremadu’s standpoint on the troops deployment. Here is why.
One: As a lawyer with a PhD in Law, the provisions of the Constitution are, and should be the ingredients that oil his varied legal, political and legislative practices, especially from the positions he has held as local Council Chairman, Secretary to the State Government, Chief of Staff to the Governor, a Law teacher and the second highest Member of Nigeria’s parliament.
Two: Ekweremadu was Deputy for eight years under former Senate President David Mark. And by early June 2017, he would have clocked consecutive 10 years  – an unbroken record – in that position. And in those years, he had deputised for, and chaired the Plenary in the absence of the Senate Presidents many times.
Three: As the DSP, he has been the co-Chair of the Constitution Amendment Committee of the National Assembly. And in that capacity, he must have read the Constitution over and over again, and thus mastered, and virtually knew its contents by heart, as he knows the back of his hand.
Four: Ekweremadu, who was first elected Deputy Speaker and later Speaker of the ECOWAS Parliament in 2011, was in September 2009, “appointed to lead ECOWAS ad-hoc committee to work for the return of constitutional order in the Niger Republic.”
Five: Recall that before last Thursday, he was, perhaps, the most vocal Nigerian officeholder to publicly voice opposition to the use of force to remove President Yahya Jammeh from power following his defiance to accept defeat in the December 1, 2016 election. While he wanted the impasse resolved through the courts, did Ekweremadu exert equal pressure on Jammeh to respect the wishes of The Gambian people, which they expressed for Mr. Adama Barrow?
Had the ECOWAS, backed by the African Union (AU) and the United Nations Security Council followed the Ekweremadu option, Jammeh, no matter the outcome of judicial intervention in the contrived electoral dispute, would have dug in after the 90 days’ grace period he had craved for. By which time it would be difficult to dislodge him from power, save for an outright coup d’état against him.
From the foregoing, we can’t say legislators of Ekweremadu and Utazi’s standing, experience and exposure lack understanding of the provisions of the Constitution. So, it’s left to the imagination their motive for raising the “point of order” on the President’s troops deployment to The Gambia. Certainly not an altruistic one!
* Mr. Ezomon, Journalist and Media Consultant, writes from Lagos, Nigeria.