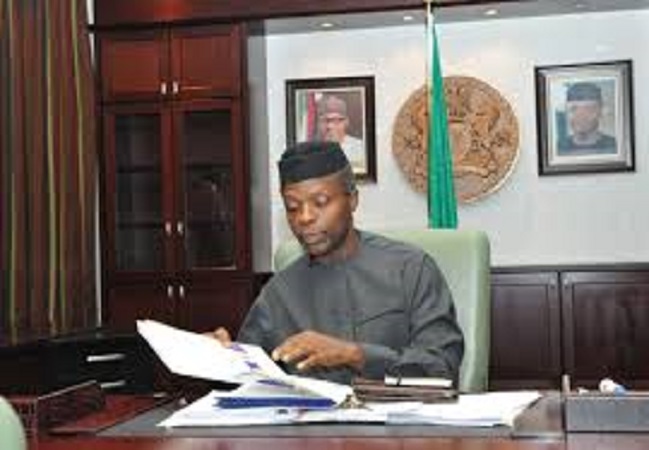 On October 14, 2016, the entire world was greeted with the cheering news of the release of 21 out of the over 200 Chibok schoolgirls abducted in April, 2014 by the Boko Haram sect. The news of the girls’ return, regardless of the circumstances surrounding their release from captivity, generated varied reactions, dominating discussions on both national and international media.

Expectedly, questions about how, where and when the girls were released came up and government officials, at the highest level, promptly and consistently provided answers in a manner indicative of coordinated and well-organized set-up.

The Vice President, Prof. Yemi Osinbajo and Minister of Information and Culture, Alhaji Lai Mohammed, addressed two separate world news conferences in less than 12 hours that the girls were flown into Abuja from Maiduguri, all in a bid to assure Nigerians and the world of government’s commitment to the release of the girls and that the Chibok girls’ released was not foreclosed as insinuated in some quarters.

In the two news conferences, both the Vice President and the Information and Culture Minister were consistent in their narration and presentation of facts surrounding the release of the 21 girls. This suggests that government had from the onset taken seriously, the issue of communication with Nigerians, on all that had transpired and resulted in the release of the girls. The news conferences were also significant in that frayed nerves were calmed and uncertainties surrounding the girls’ release were clarified.

In spite of these efforts, some persons (perhaps, enemies of the country) have resorted to insulting the personality of the Vice President, Prof. Yemi Osinbajo, describing his response to questions from journalists at the news conference as blatant lies.

It is pertinent to state at this juncture that such a reckless, hilarious and premature remark about the personality of the vice president constitutes distraction to the main issue of the girls’ safe return.

The subsequent release of 21 of the Chibok girls following successful negotiations between the government and its partners, and the Boko Haram insurgents can therefore be said to be consistent with government’s earlier position on the matter.

So, the recent criticisms of the administration in some quarters over the conditions that followed the release of the girls can best be described as cheap blackmail, diversionary and dangerous to ongoing efforts to secure the release of the remaining girls from captivity.

Specifically, MrJojo  Kwebena’s remark about Vice President Yemi Osinbajo’s address to the nation on the release of the girls on Friday October 14, 2016, is most incongruous and disheartening. In his comment published in an online medium, Kwebena presented the Vice President as a liar.

Clearly, Mr Kwebena’s interest, as reflected in his hurriedly packaged and baseless conjectures betrays his ignoble effort to first portray the office of the Vice President in a manner most scornful, and not necessarily anchored on a patriotic desire to seek the safe return of the girls like majority of Nigerians and members of the international community had demonstrated since the epic return of these girls.

His concern has rather being on what government was offering to secure their release from Boko Haram captivity. One   wonders if  Kwebena is a hostage negotiator for him to have been so sure in his allusion that the Vice President lied on national television. The Federal Government’s position in the entire episode which was reflected in all its presentations were based on facts and figures and in consonance with what President Buhari had consistently noted in all his comments about the release of the girls. The honourable thing Kwebena or any other `doubting Thomas’ would have done is to have presented a contrary opinion that challenges facts presented by the vice president rather than expose his ignorance on sensitive matters of national security implications.

Contrary to what Mr. Kwebena may want the public to believe, there is no statement, official or unofficial, from the military that contradicts comments made by Vice President Osinbajo or Alhaji Lai Mohammed, and up till now, no organization or individual has come up with any figure that was paid to secure the girls’ release.

The Defence Headquarters, in its usual manner released a statement signed by its spokesman, Brig. Gen. Rabe Abubakar on October 15 which should have cleared doubts conceived in the minds of  Kwebena and his likes, about the military operations and the negotiations for the girls’ release.

According to the DHQ, “the military also want to debunk the baseless and unfounded story that there is disquiet in the military over the condition of release of the girls.’’

Furthermore, such blanket statements meant to castaspersions on the Federal Government’s efforts to get the remaining girls back should be taken with a pinch of salt because such sweeping remarks that are based on vague sources (an international medium and unknown military source)only end up causing disaffection in the society and inciting the public against government.

Cynics like Mr. Kwebena should have been well informed before attempting to mislead an enlightened public and on wits that negotiations are not done on the pages of newspapers or concluded in the press, not to talk of a situation where majority of the hostages are yet to be released. If information from official governmentsources are unanimous that the girls were released unconditionally then the public, owing to the trust and confidence it had developed on this government, should discountenance whatever falsehood peddled by anyone.

Moreover, about 90 per cent of the abducted girls are still in captivity and that in my opinion remains the central focus of government and one can conveniently draw from the present mood that this is indeed topmost on the minds of Nigerians.