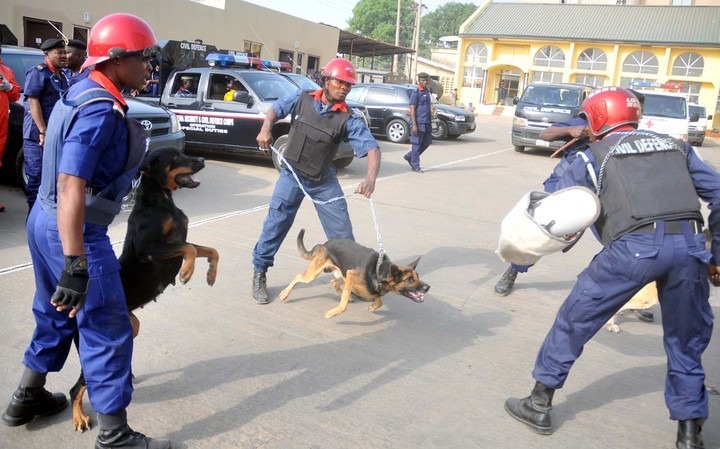 The Commandant General of the Nigeria Security and Civil Defence Corps (NSCDC), Abdullahi Gana Muhammadu, has given concrete assurance to the good people of Bayelsa State that the Gubernatorial Poll of Saturday, December 5, 2015 will be very peaceful.

Gana made this assertion at the Corps National Headquarters, Abuja, disclosing that 10,000 personnel have been deployed to provide Security before, during and after election.

According to the NSCDC helmsman ” 3 Deputy Commandant Generals, 4 Assistant Commandant Generals, a host of Commandants, Officers and Men and sniffer dogs will be on hand to ensure a hitch-free Poll on Saturday. Also, armed personnel have been strategically positioned to protect the Nations National Assets to dissuade hoodlums from having a field day ‘’.

The CG who expressed optimism on the Bayelsa Poll, called on INEC to be the unbiased umpire they have been known for, noting that their right conduction of the election will determine the outcome of the poll which he said, he is very sure will be very free and fair.

The Leader of the NSCDC, implored the politicians who will be contesting in the Poll not to make it a do or die affair as a winner and a loser must emerge after the election, admonishing them further, to be open minded to accept defeat and victory with humility and that they should work together for the overall good of the people of Bayelsa State, who first came out out of their goodwill to vote for them not withstanding who emerges as the loser or victor.

Abdullahi Muhammadu, charged Parents and Guardians not to allow their wards to be used as thugs to accomplish any form of Catastrophe. He reminded Parents and Guardians that their abilities to enthrone a good government in Bayelsa State through the peaceful conducts by them and their wards who are of age to exercise their lawful franchise during the Poll, will usher in afterward a very Prosperous Bayelsa State of their dream turned reality.