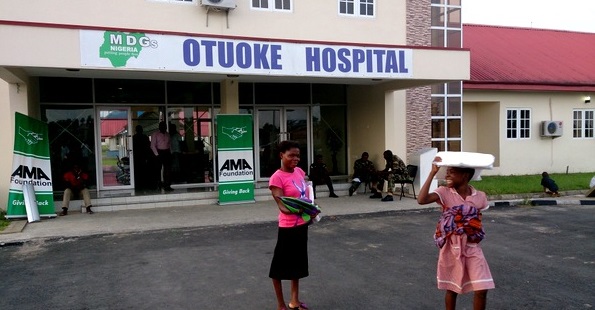 A woman whose name was given as Mrs. Ayokpo Okringbo was shot dead on Thursday during a failed attempt by political thugs allegedly sponsored by the All Progressives Congress (APC) to abduct chieftain of the Peoples Democratic Party and owner of Watgo fuel station, Ogoriba Watson in Kolokuma-Opokuma and Odi areas of Bayelsa state.

The casualty is coming about 48 hours to the Bayelsa state governorship election.

The Director of Publicity of the Restoration Campaign Organisation, Jonathan Obuebite, told journalists in Yenagoa that the attackers were dressed in army uniforms.

He stated that the kidnap attempt was foiled by a police patrol which swiftly responded to a distress call which led to exchange of gun fire between the thugs and the police.

According to him, sensing they were overwhelmed, the thugs resorted to shooting sporadically to escape and in the process, a women leader of the PDP in that ward was shot.

During the incident which happened in Odi at 4.30 am, a woman whose name was given as Mrs. Ayokpo Okringbo was rushed to the hospital but later died.

Obuebite who said that the terror activities of the APC and its agents were designed to scare people from going out to vote, expressed optimism that they will fail because the voters were determined to express their convictions at the election by voting for the PDP.

While condemning the alleged terror act, he called on the security authorities to check the excesses of the APC and its penchant to resort to violence and brigandage.

“APC ‘s actions have clearly shown that they are not prepared for the election. It is true that all they are out to do is to unleash mayhem which will result in the outright cancellation of the election but we hope that the security agencies are on top of the situation”.

Obuebite commended the gallantry of the police officers for successfully foiling the kidnap attempt and called on the Inspector General of Police to take urgent steps to deploy superior intelligence in tracking the movement of criminal elements who, he accused, were hell-bent in derailing the electoral process.

“Bayelsa is under siege at the moment. APC thugs have taken over the entire state. The police authorities must move with speed and apply superior intelligence to fish out these criminal elements before they truncate this election”, he stated.