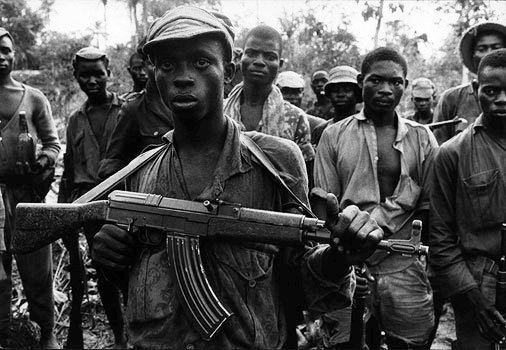 The Biafra Liberation and Emancipation Movement has called on Igbos everywhere in the country to implore self defence mechanisms in view of threats by some northerners and Niger Delta ex-warlords ahead of the 2015 general elections in the country.

Rising from an expanded assembly held at Zodiac Hotel, Rangers Street, Independent Layout in Enugu this evening, the group said they were compelled after observing deliberations of the Niger Delta ex-ward held at Yenegoa which discussed very important issues bordering on the survival of our democracy and continual co-existence as a nation to hold an emergency session where it was unanimously agreed that members should rise to adopt, endorse and uphold the self defence strategies being implored by the freedom fighters in the creek to protect President Goodluck Jonathan and their resources.

The movement said it is only wise for an average Igboman and his properties who have been the principal target of every form of ethno-religious crisis in Nigeria to take cautions to avoid unnecessary lost of lives and properties ahead of threats by some neo-feudalists to seize power through the back door.

They stated that while its deliberations was still ongoing, the news came again from Minna in north central Nigeria that campaign vehicles of President Goodluck Jonathan were on fire, an action which they view as a premeditated sinister motive to achieve earlier threats by some highly placed opposition leaders in the country to form a parallel government should one of their own fail to clinch the presidency at all cost.

According to the President-General of BLEM, Marshal Obumneme Ozoani and others who signed the communique, some neo-feudal warlords have found the All Progressive Congress and its strongholds as a breeding ground to actualise their evil ambition against the good people of Nigeria and therefore warned that no more shall the blood of an Igbo used as a sacrifice to satisfy the thirst of an average northerner for violence, stating clearly that the South-east has remained too quite since the end of the civil war to swallow further injustices and maltreatment by other majority groups in the country who believe in violence, intimidation, coercion, threats and crude force as a means of acquiring power to preside over the affairs of others in the country.

The statement further warned that the conspiracy of the north-west and north-east 1990 through one Ogah to proclaim and exercise itself as a territory from Nigeria has crippled into the north central as a launching pad for violence against other ethnic minorities and Nigerians are implored to rise up against these new warlords  who are momentarily reacting to their depression, ignorance and frustration to appropriate the resources of this nation to themselves and allies as they have always done in the past.

“We make bold to unequivocally state after carefully observing, analysing and deliberating on the resolution of the Niger-Delta ex-warlords to protect its citizenry and our nascent democracy, the congress wishes to unanimously endorse and uphold all critical resolutions of the Yenegoa convention for self-protection and defence of the every Igboman in Nigeria during and after the 2015 general elections.”

“The Igbo nation has remained the principal targets of hoodlums during every ethno-religious crisis that took place in Nigeria after independence which clearly suggest some conspiracy against the Igbos by north leaders to pursue an agenda against our people, we hereby reinstate our commitment to the growth of Nigeria’s democracy, however would not allow neo-feudalism to ruin our hard earned achievements in the name of winning elections at all cost despite the free democratic landscape being provided by the constitution for every Nigerian to aspire to the highest office in the land.”

“We forbid the blood of any Igboman to be spilled during or after the elections and on this premise we call on the northern traditional rulers to call their children to order or equally get ready to confront us as they continue to draw the battle line,” the statement also added.