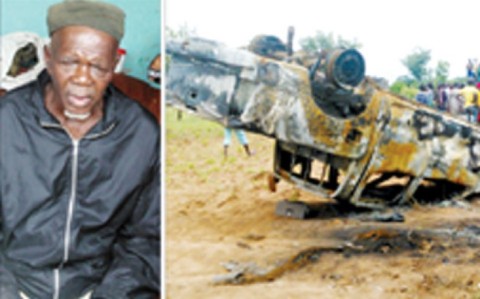 May 7, 2013,  and other related matters has indicted Senator Solomon

for giving false evidence on oat before the commission.

His actions are punishable under Section 158(1) of the Penal Code Law,

as applicable in Nasarawa State.

Excerpts from the report of the commission made available to newsmen

policemen and 10 personnel of the Department of the State Services

were killed  by the Ombatse militia group at Alakyo Village on May 7,

caused the death of the security officials as evidence revealed that

the Ombatse militias used firearms, cudgels,  cutlasses and other

lethal weapons in killing and injuring the affected personnel who were

on lawful duty at Alakyo.

The commission’s report further said that a combination of factors

were responsible for the spread of communal violence in the state,

some of which include ethnic rivalry to achieve political dominance;

youth restiveness due to non-profitable engagement such as the high

unemployment rate;  manipulation of the youth by the political elite

that have engulfed the state.

There is hardly any political dimension to the militant activities of

reported that “the Federal Government unemphatic concern over the

in the containment of violence in the State. The Federal Government’s

attitude has given room for tendencious  interpretations, largely of a

The Commission notes also condemned the role played by the “Eggon

Traditional Council and its elders in the tacit support of the

activities of the outlawed Ombatse group” noting that “the Commission

would have recommended the outright sanction of the council, but

however “strongly recommends the formal admonition and reprimand of

the Council and its elders in the interim, for their moral failure to

exceeded the bounds of reason”.