The state-run Middle East News Agency, citing medical sources, said he was declared clinically dead shortly after arriving late Tuesday at a military hospital in Cairo, where he had been taken after suffering a stroke and cardiac arrest earlier in the day.

But Gen. Mamdouh Shaheen, a member of the Supreme Council of the Armed Forces, told CNN, “He is not clinically dead as reported, but his health is deteriorating and he is in critical condition.”

Fast facts on the life of Hosni Mubarak 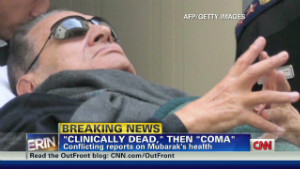 Mubarak in a coma, protesters gather 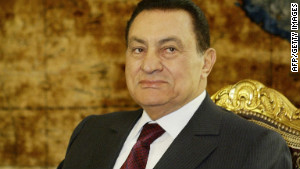 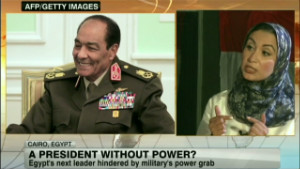 The legacy of the Egyptian revolution 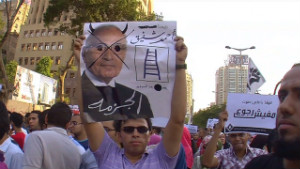 Mubarak was taken by helicopter to the military hospital in the Maadi suburb of Cairo, Shaheen said. “He had a heart attack and his heart stopped and he was saved by electric shocks, then placed on respirator,” he said. “His pulse is 40. He then got a brain clot. He is NOT clinically dead as reported but his health is deteriorating and he is in critical condition.”

And Mubarak’s lawyer, Fareed El Deeb, told CNN, “He has been in a coma for hours now. He has had water on the lungs for 10 days now and his blood pressure is down today, which obstructed his breathing and forced doctors to put him on a respirator. He was given medicine intravenously to relieve the brain clot, and electric shocks were used to revive him but there was no substantial response. He is not dead as reported.”

El Deeb added that Mubarak’s wife, Suzanne, was at his side. He blamed SCAF for not having moved Mubarak last week from the prison to the hospital.

Adel Saeed, the official spokesman of the Egyptian prosecutor, had said earlier, “We were informed by prison authority that Mubarak’s heart has stopped and they used electric shocks and CPR to resurrect him. He is now on an artificial respirator and doctors from the armed forces and International Medical Center will inspect him.”

Nile TV reported that Mubarak had suffered a stroke.

He was taken from Tora prison hospital to Maadi military hospital, El Deeb told CNN. “He has suffered a stroke, but he is not dead.”

The prosecutor and the military council denied Mubarak had been moved.

His health had been reported in decline since he was ousted as president of Egypt in February 2011 and found guilty of charges related to the killings of hundreds of anti-government demonstrators during the revolution.

“We should be skeptical,” said Fouad Ajami, a senior fellow at Stanford University’s Hoover Institution.

“There’s a great Arab expression I like and it asks the following question: When you’re told that someone is dead, you say, ‘Is he dead and buried, or just dead?’ I think we are in the middle of this kind of situation.”

“Clinically dead is not a phrase that is commonly used, but when it is used, what it usually means is that someone is brain dead,” said CNN Senior Medical Correspondent Elizabeth Cohen. “In the United States, we would call this person dead because they have no brain activity.”

Meanwhile, crowds jammed Tahrir Square once again on Wednesday. But their focus this time was not on Mubarak. Instead, it was on the power grab by the Egyptian military, which last week issued a constitutional decree that stripped the position of president of much of its power after a top court dissolved the parliament. Those moves were followed by the nation’s first presidential election, which pitted Muslim Brotherhood candidate Mohammed Morsi against Mubarak’s former prime minister, Ahmed Safik. Final results have not been announced.

“It’s a media stunt to divert attention from the constitutional decree,” said Taha Shaker, a demonstrator in the square. “If he’s really dead, it won’t make a difference. We’ve started a sit-in and won’t leave unless the Supreme Council of the Armed Forces leaves unconditionally.”

“I’ve come from far away. I’m not leaving until Morsi swears the oath in front of the legitimately elected parliament,” said demonstrator Sayed Ahmed. “I don’t care about Mubarak. These are games played by the intelligence services.”

“If he’s really dead, its God’s will,” said Nasser Shaaban, another demonstrator. “I would hope he lives to see the new president.”

Outside Maadi Military Hospital, shortly before midnight Tuesday, there was no additional security. Instead, there were a few policemen outside the main gate and two military police inside the gate. Across the street perhaps a half-dozen journalists sat on the curb smoking cigarettes.

Have you witnessed demonstrations in the Arab world? Tell us what you see.