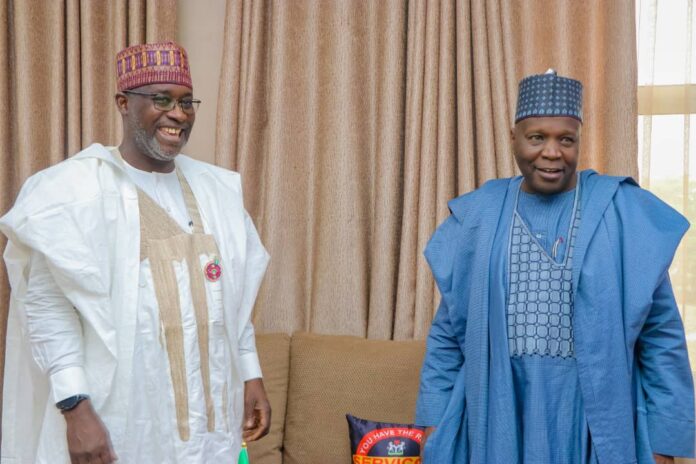 Advertisement
By Lateef Taiwo
Gombe State Governor,  Muhammadu Inuwa Yahaya has visited the Minister of Water Resources,  Engr. Sulaiman Adamu in his office in Abuja on Friday, 2nd December,  2022.
This came against the backdrop of several other visits by the Governor to the Ministry in demonstration of his administration’s resolve to strengthen mutual partnership with the Federal Government on how to better the lots of the citizenry.
Gombe State, under the leadership of Governor Inuwa has already keyed into many programmes and projects of the Federal Government that have direct bearing on the common man, including the water, sanitation and irrigation schemes.
The Governor had since scaled up investment in water, sanitation and hygiene, thereby boosting access and supply of portable water to both urban and rural communities.
Recall that Gombe State Government has begun the expansion and rehabilitation of it’s Regional Water Scheme following the recent signing of a contract worth over 11 billion naira.
The project aims to provide additional 11 million liters of water to the existing supply capacity of the scheme and pipe laying of more than 160 km within the Gombe metropolis and neighboring communities.
The contractor handling the project,  Jidadu Ventures Ltd had since mobilized all the needed facilities, personnel, and resources to the sites as construction works are being undertaken simultaneously with all now reaching significant levels of completion.