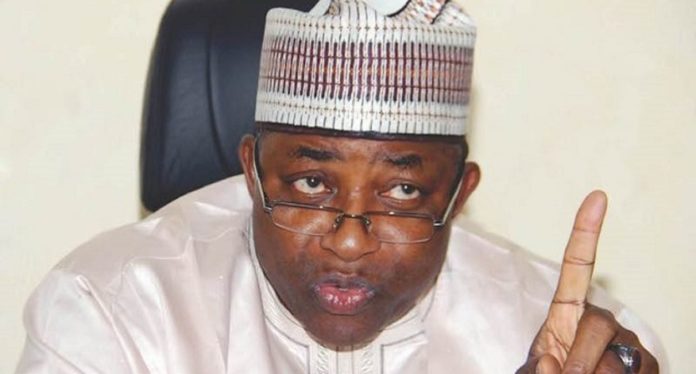 Disagreement has come out openly among the Supporters and Political appointees of the former Bauchi State Governor Mohammed Abdullahi Abubakar.

The two groups differ over the candidate they intend to support as a Governor in the 2023 general election.

Former Deputy Governor of Bauchi State during the tenure of Abubakar , Architect Sule Katagum defected to PDP with some of the appointees canvassing for support to Governor Bala Mohammed , while the other group Led by Isa Musa Matori remain in the All Progressive Congress APC working for the Air Marshal Sadiq Abubakar to win the 2023 gubernatorial election.

Katagum has been going round the 20 local government areas of the state holding consultations with stakeholders and supporters of the former Governor to work for the success of PDP in 2023, the action that angered some of the Political appointees of the former to disassociate themselves from what the former Deputy Governor is doing.

Political appointees of former Governor Mohammad Abubakar, led by Isa Matori, while speaking at the APC Next Level Office in Bauchi, yesterday, said the former deputy governor is a political jobber and scavenger out to destroy the party that brought him to limelight.

Matori alleged that Katagum had at a separate gathering in Azare and Darazo, adding that all Abubakars political appointees agreed to work for the re-election of PDPs Bala Mohammed in 2023.
We feel duty-bound to react to the false claims therein and caution faithful party members to stand against it and any machination by political jobbers and scavengers to demean the former governor. The team has been contracted to work against the victory of APC and its candidate, Air Marshal . Sadique Abubakar, in the 2023 election.

The groups attention has been drawn to a statement and a footage from Bauchi, Azare and Darazo under a purported committee featuring the former deputy governor of Bauchi as the convener and a number of few persons who once served the regime of former Governor Mohammed Abubakar, going viral on news media and claimed to be working for the former governor, urging his supporters to vote for PDPs Mohammed in the 2023 governorship election. What a disgrace to honour! he said.

Matori said, the former governor, as a reputable lawyer, undoubtedly submissive to the partys constitution and other relevant statute documents regulating behaviour and conducts of members, is not the type that would reduce himself to anti-party behaviour and a life similar to that of a political jobber or a scavenger.

In a swift reaction former Deputy Governor said they have consulted with the former Governor before Joining the PDP , himself and many of of the Political appointees of the former Governor are working together to see the success of the PDP in Bauchi State 2023.

Katagum said No Governor can succeed in implementing his blue print during first tenure he most be given the chance to get the second term to enable him correct the mistakes he made and complete the execution of his laudabale programmes for the benefit of the people.

He said Governor proved to them that he has the interest of the State in his heart when he completed all the projects started by the former Bauchi State Governor Abubakar , not only comleted the projects even the contractors he didnt change them and assure that he has a brighter chance to win the election in 2023.

Katagum said among the Political appointees of the former Governor everyone is at liberty to follow the party of his choice the people that are grumbling are the same peoole that abandoned the former governor when he was contesting for his second term, because they see the light in what we are dong that was the reason why few of them now started making noise thinking that they will destabilize us but since we are with the majority of the people and we are sure that we are following the path of honour , path of winning the election we will not join issues with anyone