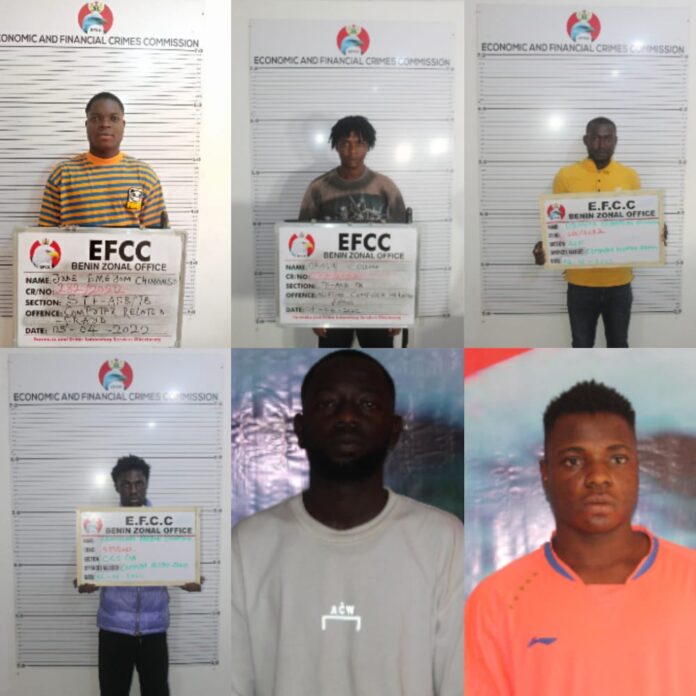 They were arraigned by the Benin Zonal Command of EFCC on separate one count charges bordering on impersonation, intent to defraud and making false statements to the EFCC.

The charge against Akinselure Adebayo reads: “that you, Akinselure Adebayo on or about the 8th day of June, 2022 at No 1 Court  Road, GRA Benin City, Edo State within the jurisdiction of this Honourable Court did make false statement in writing to an officer of the Economic and Financial Crimes Commission in the course of his duties as an officer of the Commission as to the ownership of a 2008 Toyota Camry with registration number: ABU 219 GF which you knew to be false and thereby committed an offence contrary to section 39(2)(a) of the Economic and Financial Crimes Commission ( Establishment ) Act, 2004 and punishable under section 39 (2)(b) of the same Act”.

The charge against Okolie Collins reads: “that you, Okolie Collins between 2020 and 2021 in Abudu, Edo State within the jurisdiction of this Honourable Court did with intent to defraud represent yourself to be Alex Lougwin, an actor and American citizen on Facebook platform and thereby committed an offence contrary to and punishable under section 484 of the Criminal Code Law Cap 48 Laws of Bendel State of Nigeria (as applicable in Edo State) 1976”

The defendants pleaded guilty to the charges preferred against them by the EFCC prompting the prosecution, Francis Jirbo, I. N. Elodi and K. U. Udus to pray the court to convict and sentence them accordingly.

However, counsel to the defendants, Emmanuel Okorie, pleaded with the court to temper justice with mercy as the defendants have been remorseful for their actions.