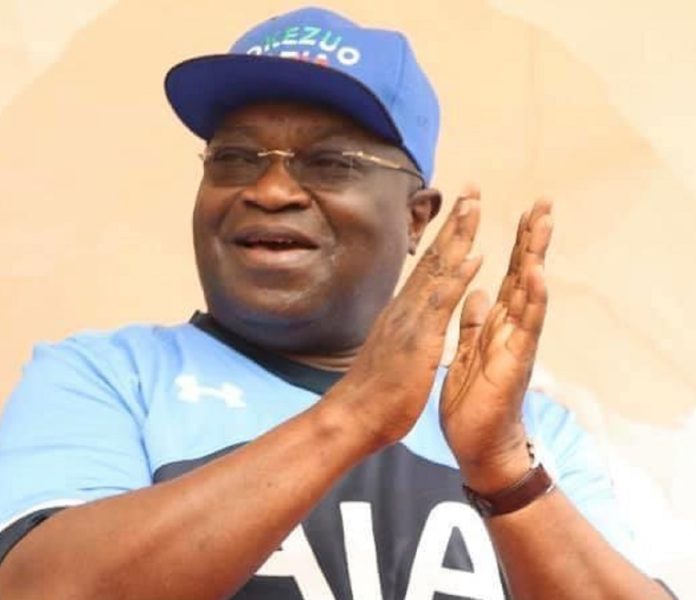 Advertisement
A calm disposition in the face of undue provocation is one of the greatest virtue of man.The virtue is rare and is highly respected and celebrated. It is incontrovertible that”the less you respond to negative people, the more your life will become”. Like Agos Bamaiyi rightly puts it,” Remain calm in the face of provocation, challenges and difficulties; for then you are the most likely to see the most beneficial way out. No matter how badbthings get, there is always a honourable way out”.
Arguably, in the history of politics in Nigeria, no man has exhibited this high level of calmness in the face of undue and unwarranted provocation more Gov. Okezie Ikpeazu. He has been roundly abused. Uncomplimentary remarks, highly not benefitting to an office holder as exalted as the governorship position, have been hurled on him. His statements have time without limit been slanted to taunt him. He has been serially abused by even people he feed. But Gov Okezie Ikpeazu has chosen to maintain a calm disposition amid these abuses.
The governor’s responses to these undue provocations have kept many wondering what manner of man he is. Bit tontge discerning minds, Gov. Ikpeazu’s attitude is the best way to go. His attitude of not returning evil to evil is drawn from Mahatma Ghandi’s position thusky”Do not fight by means of violence. Violence is a sign of weakness. Whatever cannot win by influencing the heart tries to win by means of violence. The most splendid and lasting battles known to history are the battles of human thought.The most ignoble and the shortest are the battles of violence. An idea which needs weapons to survive, will die by itself. The idea which prevails merely through the use of violence is perverted. A living idea conquers by itself. It is followed by millions”.  Furthermore, we are admonished that “Naked coercion… is an expensive affair for the rulers. Even for them it a painful and nerve-shaking ordeal, and they know well ultimately it weakens their foundations. It exposes continually the real character of their rule, both to the people coerced and the world at large. They infinitely prefer to put on the velvet glove to hide the iron. Nothing is more irritating and, in the final analysis, harmful to a Government than to have a deal with people who will not bend to it’s will, whatever the consequences”. The lesson here is that naked coercion is a veritablentool in the hands of leaders but Go. Ikpeazu has chosen a better alternative. Let no man mistaken this for weakness rather decency.
Indeed, it is the right of the opposition to provide alternative voices and criticisms in a multiparty system such as ours. But those voices should be within the confines of decency and civility. It is also glaring that the beauty of multiparty system or oppositionis to provide abundant choice of programmes , ensuring that the decision making process involves wider representation of diverse opinions and interest. What the opposition in the state should concentrate at this stage is to appeal to the minds of the electorate by reeling out programmes and policies and not concentrate hurling insults, propaganda and blackmails. They should concentrate on the factors that ensure of parties in elections such as effective organisation, effective and efficient leadership, good policies and programmes, broad based membership, education of the electorate, effective campaign, enforcement of party disciplines, party patronages. Unfortunately, why all these are lacking among these opposition parties, they are bent on removing specks from another person’s eyes why theirs are glaringly decorated with specks. This negates Matthew 7:5 admonition thusly,” You hypocrite, first take the log out of your own eyes, and then you will see clearly to take the speck out of your brother’s “.
Unfortunately, also, some of these later day saints were at one point or the other part of current administration. They have metamorphosed into turn coats for some selfish interests,which is highly predicated on failure to secure party nomination tickets.
Does this not amount to hypocrisy?  The appeal to Abians is to careful at this point because” Hypocrites are rather easy to recognise.They spend most of their time pointing out the laws in others, and the rest of the time trying to flaunt their own perfection “. This buttresses William Hazlitt’s position that “The only vice that cannot be forgiven is hypocrisy. The repentance of a hypocrite is itself hypocrisy”. And Andre Gide insists that” The true hypocrite is the one who ceases to perceive his deception, the one who lies with sincerity”.
Paul’s  charge to the Galatians” From now on, let no one cause me trouble, for I bear on my body the marks of Jesus “, has  been favourite refrain of Gov Ikpeazu. Therefore, the insults should cease. The mockeries should henceforth abate. Gov. Ikpeazu’s calm and peaceful disposition should not be mistaken for weskness. Rather he has chosen Buddha’s position that” Those who free of resentful thoughts surelynfind peace”, and Euripides thought that” Silence is true wisdom’s best reply”. A word is enough for the wise.