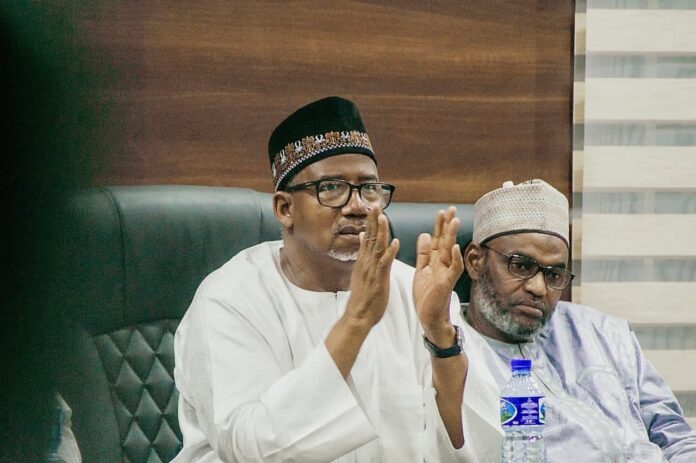 Governor bala Mohamed is seemingly not worried about 2023 general elections due to the glaring evidences on ground especially within the major and minor political parties that has multiple number of problems and lack of preparedness to challenge the governorship position, whilst political hypocrisy among top members of the APC and the Kwankwaso’s rebirth NNPP filled with half-baked and frustrated APC members that mostly lost reelection bid to either retain or proceed for another coveted position forcefully.

The daily defection of top-notch APC members in Bauchi state rises more hope for the incumbent governor of Bauchi state Senator Bala Mohamed, who by all yardstick is the most qualified and experienced  among all the governorship  candidates for various parties, some are even jokers as once described by Sunusi  Mohamed, referring Senator Halliru Jika a joker, pompous and crude, presently, senator Jika is the sole candidate affirmed by the NNPP after losing contest to sacked Air Marshall Ambassador Sadique Baba  of the All progressives congress in an election allegedly involved vote buying by some aspirant including the winner.

Every day,  numerous politicians and die hard are leaving the Buhari’s APC  in Bauchi state for either being neglected or sidelined from the scheme of activities in the party they somehow contributed or served meritorious whilst the likes of Faruk Mustapha, who recently joined the people’s Democratic Party in Bauchi state he opposed for years but; according to him he was not giving prepared treatment and the party seemed to be protecting the interest of few people especially during the concluded primary elections that produced Sadique as the standard bearer of the APC in Bauchi state.

Similarly, the former deputy governor of Bauchi state Architect Audu Sule Katagum who lost a senatorial bid to Sirajo  Tanko Ibrahim, a son to  immediate chief justice of Nigeria justice Ibrahim Tanko, according to him, his surprised  quitting of the APC is a most one considering the fact that, he and his      principal MA Abubakar where not given a better recognition or sense or relevance despite being a          governor and a deputy for four years.

He also pointed out lots of mind boggling reasons that set a base in the APC. Hope daily rises for governor BALA for the mass defection and disarray in the APC that produced Sadique Baba as its candidate, till today, the northern part of Bauchi state failed to openly declared support for him believing that he is not truly theirs despite being and indigene of Giade, a local government in the Katagum zone.

The fact that Sadique spent his service career with the Nigeria Air soldier service through the its peak point posted to various places within and outside Nigeria and  most of his family relations are in Bauchi local government area council which falls in the southern part of the state. the hidden and open non-support for Sadique is giving the incumbent governor Bala Mohamed a chance to take advantage of that (non acceptance) as a son of KATAGUM, against the initial prediction and hope for Talba Katagum or Faruk Mustapha, would picked the party’s ticket to challenge the                                          PDPs Governor Bala who is from  Bauchi south. As destined by God, Sadique is now the sole candidate to challenge the sweetest political position in Bauchi state from the Katagum zone that only governed the state       once in the late seventies by Tatati Ali of blessed memory, since then the divided people of Katagum failed to unit and join a force to produce a governor despite number of intellectuals and global accepted  politicians due to greediness and friction among themselves which one of the reason that led to their denied of being a state during the late Sani Abacha’s declaration of additional states in spites of their total readiness to be carved out of the Bauchi they hates to link up.

As Sadique picked Shehu Aliyu known as Barden Gabas who is from southern part of Bauchi state to be specific, Bauchi central after being elected to represent Bauchi central at the house of representatives he once served for four years, a choice that increases more hope for governor Bala Mohamed, because neither Sadique nor Barden Gabas will deliver their electoral wards in the forthcoming election.  The people of Gwallaga area in Bauchi metropolis recently destroyed posters and signpost      of Sadique, saying” what has he done to us?  He is not our own? How many people has he secured jobs for in all the capacity he attained? Did he know the problems of his area not to talk of Bauchi state at large?.

Similarly for Barden Gabas, he resides  mostly adjacent to Tafawa Balewa estate until his eventually election as member house of representatives but he neither drill a borehole for the people of the same place he lived for years before his relocation to another highbrow area nor secure jobs for the teeming people of the same place or his Wunti street. Critics debate that if credible elections will hold none of them can deliver his electoral ward not to talk of the state at large, especially joining a contest with a project governor who is  set a record clear in networking the clustered areas of the metropolis in the urban renewal projects of expanding, channeling and providing a succor to the motorist especially during festivities.

The internal wrangling among members of the APC that brought a powerful  members of the APC to cross carpet  is signal of victory for Bala Mohamed, whose road housing and educational and roads projects is earning him a feat  to stand on that has never witnessed for over four decades of its independent state. No one will argue that the likes of Senator Lawal Yahaya Gumau, Abdullahi Shehu, Faruk Mustapha, shitu Zaki, Senator Halliru Jkika, Architect Audu Sule Katagum, Senator Isa Hamma and lots of more will be a threat to the APCs dram of wrestling power after failing to retained it during the underperformed administration of MA Abubakar that      left the state in mess especially in the areas of civil service that set many workers in hardship due to massive corruption that perpetrated the administration, a reason that led to emergence of governor Bala Mohamed who is an experienced administrator and politicians  with prepared blueprint.

The APC and  its governotorial candidate seems to be sluggish in reconciling aggrieved members that will help them and rejig hope of challenging the seat, instead the party’s leadership remain mute despite daily losing of members based on minor reasons that will curtail or address and for sadique he to wake up and reject those pretenders fooling him that victory will come to him so easily because none of his rabble-rousers would give him at least one hundred votes from his electoral wards.   The poor record of MA Abubakar’s a s APC governor plus the over ambitions quest for supremacy and friction among the members the party gave Governor Bala Mohamed a hope for retaining his seat.

The massive projects embarked upon by governor Bala Mohamed is enough to campaign for him. The state that has tens of companies before doesn’t have any functional companies. Why is it so? Lack of patriotism and preparedness when looking for power to leader or govern. That breeds corruption and corruption breed greed and greed breed destruction of norms and cultural values. The return of abolished sara-suka is a bye product of youthful restiveness. Politicians are good in using the youths when it comes to election period than using them in a proper way in, making them useful. The administration of Senator Bala Mohamed is no doubt making a difference in Bauchi against old odds, Bauchi state has change its facelift from different angle of the state, ranging from infrastructures and modern housing units sighted with state of art facilities.

More schools have been established from all and sundry for the sake of improving the wellbeing and social welfare of the Bauchians. For the first time the capital city of Bauchi is looking good scattered with modern linking roads to bring succor to motorist and residents especially during festivity period, the urban renewal projects aimed at giving the state a new look and serene environment and a more business-viable state for investors  to come and invest heavily to bumper the unharness  opportunities. Testimony to this, are the ongoing mass landscaping, such as spark light, proposed kaura model city.  Governor Bala Mohamed is making a difference in Bauchi that’s why he seemed not worried about his position as never lost any general elections since joining active politics.