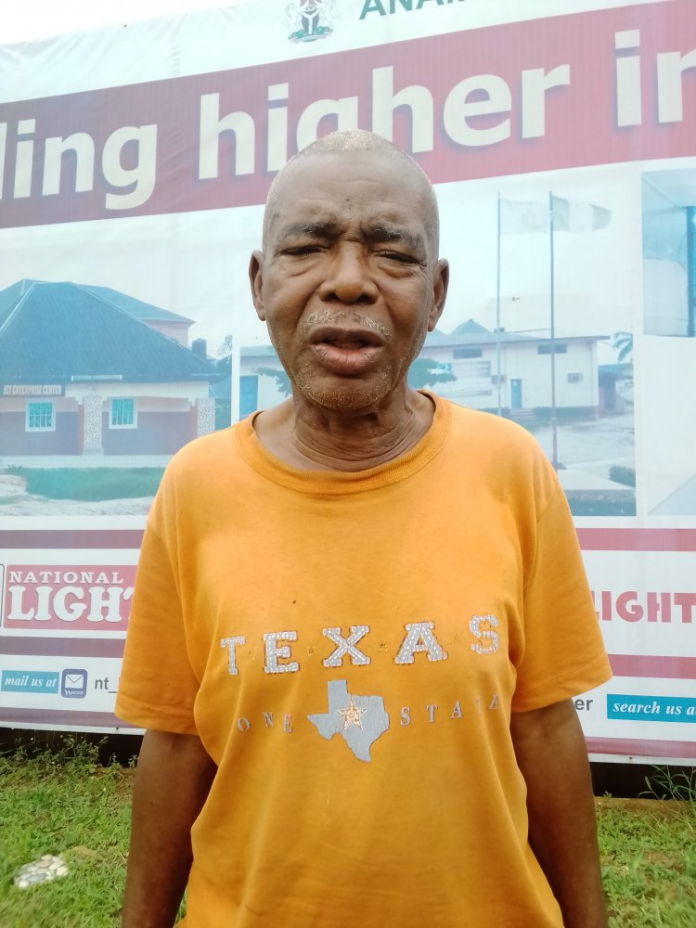 A retired civil servant, Prof. Emmanuel Uzoma Odukwe of No. 3 Joseph Abulu Road, Real Estate Quarters, Awka, Anambra State has called for urgent intervention from the government, stakeholders and members of the public, following his forceful eviction from his residence by a group of armed men who stormed his house on Monday morning.

Odukwe, while making the call in Awka on Tuesday, said he was taking his bath in his apartment when the armed men accompanied by suspected hired touts, stormed his compound with Hilux Vans.

He said they forcefully broke into his house and started throwing out his property to the amazement of everyone, after which they forcefully evicted him, locked up the house, and zoomed off, thereby rendering him homeless and exposing his property and documents to the heavy downpour that badgered in the morning.

Giving more details on the circumstances surrounding his ownership of the house, Odukwe, who is a retired Director in the state’s Ministry of Education, explained that the estate was built in 1991 by the first Military Administrator of Anambra State, Navy Captain Joseph Abulu, who gave out the apartments to some state’s civil servants who were lucky to be selected, including himself, who was selected from the Ministry of Education.

He said, “The apartments were given us on the status of ‘owner occupier’. And I was even the person who did some finishing works in some parts of my own apartment, likewise others, the cost of which the then government said it would reimburse us, but never did till today. All of us who got apartments there have been living there since then.

“After I retired, about 10 years ago, some people started disturbing me and some other occupants in the estate, 90 per cent of whom are retired civil servants, trying to force us out of our apartments unjustly.

“We started going to court over that, because I and other concerned and affected people saw it as an injustice. Later, one Mr. Cyril Anaekwe came and started claiming that my apartment had been allotted to him by the Head of Service, Barr. Harry Uduh.

“But I wondered and questioned why the Head of Service would do such thing, knowing fully well that the matter is still in court, and that the court is yet to give judgment on it.

“Because the matter has been in the court, they reduced disturbing me and other affected occupants who also took the matter to court.”

Continuing, he said, “However, just recently, this people came and started disturbing me again, without obeying the court order any longer.

“I tried to remind them that the matter is still in the court and that the court has not decided on it; but they never wanted to listen to me.

“Last month, they served one hand-written paper purported to be a court order, mandating me to vacate the house for Mr. Cyril Anaekwe. I took the paper to my lawyer, and he confirmed that the said order was not a real court order.”

The 67-year old man, however, said it was very surprising to him as he was taking his bath and a group of armed men stormed his compound at about 8 am and started displaying their drama immediately by forcefully evicting him out of his house, without giving room for any questions, negotiation or counsel.

He said, “They overpowered me, pushed me out, and threw my things out without listening to anybody. Even our head, who usually goes to court with us, one retired Pastor Iwuafor came, and they also fiercely pushed him away and carried on with their act.

“Neighbours came and started pleading for calm and negotiation, but they never also listened to anyone. They were just determined to disgrace and embarrass me.”

Can you imagine such?” he said, adding that “even as I am here now, I have not eaten anything since morning, because they threw even my food and all my belongings out; and it’s about 3 o’clock now, I have not taken anything.”

Asked the kind of intervention he needs, the visibly stressed and tired Prof. Odukwe called on the concerned authorities and the stakeholders to come to his rescue and ensure that justice prevails, by ensuring that the matter is lawfully pursued to the latter, rather than allow such injustice stand.

He said, “I am homeless now; I have nowhere to stay or live, and my property and documents are out there already scattered and beaten by rain.

“This matter is still in the court, and this people should respect the court and follow everything lawfully. They should wait for the court to decide, and stop taking the laws into their hands.

“I am a law-abiding citizen. So, if the court decides in their favour, I have no problem, and I will obey it. But if it decides in my own favour, so be it. But they should allow the courts to do their job,” he added.

All efforts made to reach Anaekwe for his own side of the story proved abortive, as he refused to respond to calls as at the time of filing the report.