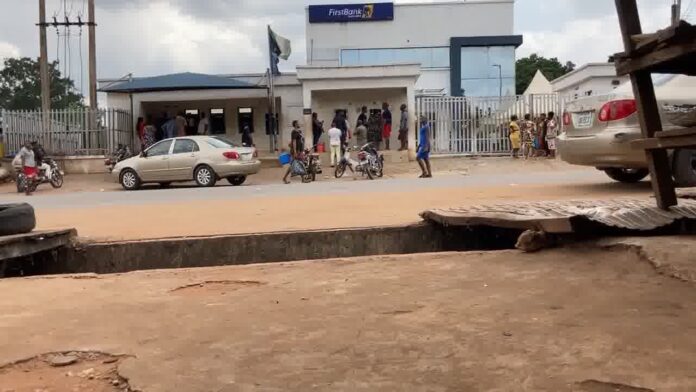 “Asking this question means you are not following what IPOB is doing and writing about the existence of DSS and other security apparatus in Nigeria. We got tip of this robbery yesterday and raised alarm over it yesterday morning still DSS perfected the robbery attack on banks. Our intelligence reports was accurate and truth. How do you expect IPOB or ESN security outfit indulging on armed robbery attacks and exhibited our national flag, that one alone has proven that it was not IPOB or ESN security outfit. We have exposed them and we are prepared to sacrifice anything to stop them from attacking banks in our territory.” – Replied Emma Powerful, the IPOB media and publicity secretary to a direct question posed by 247ureports.com – “was it IPOB that robbed the First Bank in Anambra and killed two people and hoisted Biafran flags?”

The Indigenous Peoples of Biafra [IPOB] – A group proscribed by the south eastern governors and has termed its activities as illegal and treasonous – has continued to maintain increasing popularity within the south east and in the south south geopolitical zones. Interestingly, the leader of the group, Mazi Nnamdi Kanu who escaped assassination and reappeared in Israel and later in United Kingdom where he currently resides – has also continued to enjoy increased following from the same region among all demographics.

Nnamdi Kanu and the IPOB has – over the years after the proscription – become the voice of the region. The only trusted voice of the region. The group’s recent formation of a security outfit – the eastern security network [ESN] – to repel the proliferation of foreign bandits and Fulani herdsmen has on the surface scored a major success before the eyes of the masses in the said region. To the point, the ESN membership has grown significantly within a short period.

According to the members of the IPOB, the popularity of the ESN and IPOB in the region does not seat well with the governors and political leaders in the region – including the security apparatus.

IPOB suggests the Department of Security Services [DSS] has adopted a plan to destabilize the ESN through infiltration.

“The DSS want to infiltrate us by planting some of their men inside ESN to use them to undertake illegalities like going out to kill innocent people and robbing banks and hoisting flags – so as so breed hatred from the masses towards us” said one of the leaders of the group who continued to add that the ESN will ensure no such robbery occurs again in ‘Biafraland’.

“They want to give ESN and IPOB a bad name. We don’t do robbery. We defend our people against rapists, kidnappers and killers”. He explained that the people of ‘Biafraland’ must be vigilant against these people because the DSS does not have the interest of our people at heart. “They are working on the side of the Fulani herdsmen”.

247ureports.com reached out to the DSS for response. The spokesperson of DSS, Peter Afunaya [PhD] was reached concerning the charge that the DSS was responsible for the bank robbery. He did not respond.