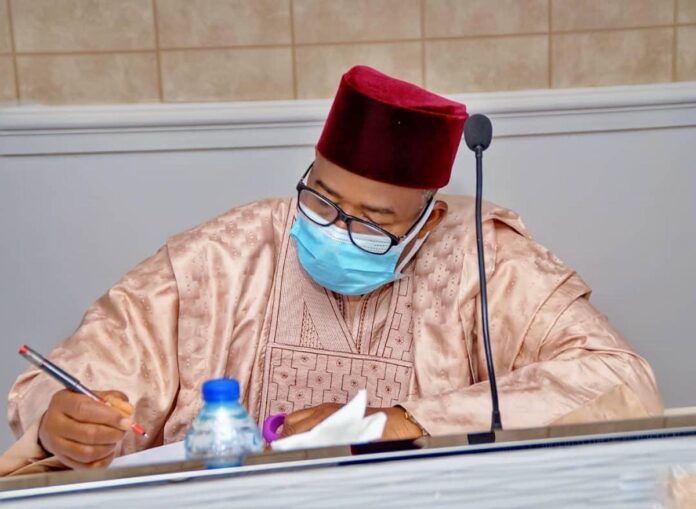 Existing in a society where the people have the courage to point an accusing finger to their leaders when they mess up but, remain silent when the leaders attempt to record positive achievements is one of the most difficult situation in which  one may find himself. Are we only waiting for the shortcomings of the leaders to castigate?

If no, how can any unbiased observant in Bauchi State not commend the state governor, Bala Mohammed for approving the payment of UTME registration fees for 3,810 students who got grades ‘A’ and ‘B’ in the recently concluded SSCE Aptitude Test in the State. The approval which was made known by the Commissioner of Education, Dr. Aliyu Tilde, said that, the governor had also approved payment of NABTEB exams fees for all the 1,751 SS3 Students of Government Technical Colleges along with all the 499 students sitting for NBAIS exams for Government Arabic Colleges. These all were there published by national dailies but, it seems no body cares  to appreciate. As someone who is passionate about the education of my society, I must be fair to the governor.

Two years ago, following the new policies and processes, introduced by the state’s education commissioner for meritorious selection of competent students whose WAEC would be sponsored, there was a delay in the payment which resulted in caused and cost some students a lot. This, therefore, sparked public outcry so much so that those students were incited to demonstrate on streets in Bauchi, expressing their fiery. But, now a good News broke since last week, the social platforms are silent about it. Shall we have the courage to criticize when next the government decides not to sponsor?

The sponsorship of UTME registration fees by the state government is, to the best of my knowledge, unprecedented in the history of the state. I know from 1999 to 2007, the then governor Ahmad Adamu Mu’azu sidelined male students, sponsored NECO exams fees for female students alone. With the emergence of governor Yuguda from 2007 to 2015 he switched to sponsor WAEC and for both male and female students in government secondary schools across the state. Likewise the recent Muhammad Abdullahi Abubakar took the WAEC financial burden for both gender. To be fair, the best of all, is Senator Bala Mohammed who has now voluntarily in his wisdom and passion for education, decided to sponsor UTME, NECO, NABTEB and NBAIS exams for students in Government Arabic Colleges.

According to the state’s commissioner of education, the state government does not owe any of the  national examination bodies a kobo. This is an achievement worthy of publicizing, because i know from experience that, there are a lot of super intelligent students from poor family backgrounds who could not attain SSCE certificate because of bankruptcy, thus, they give up their dream to further their education to the high level. This move by the Bauchi State government is a wakeup call to those type of students to keep their lofty dreams alive_ the dream of attaining greatness educationally, which has always eluded them.

The governor must have understood the saying goes, “no society can develop beyond its level of education”, that is why since his emergence, especially within his first year, education has received priority by way of renovating Primary, Junior and Senior Secondary Schools that were in dilapidated condition during the previous administration. Some of the renovated Schools within Bauchi metropolis include Baba Sidi Primary School, Dutsen Tanshi Primary School, GDSS Zannuwa, Dawaki Primary School, GDSS Kofar Wambai, Government Comprehensive Day Secondary School, GJSS Model Fadamar Mada among others across the State.

In the same vein, the Governor Bala’s administration through Commissioner of Education, Dr. Aliyu Tilde introduced digital attendance whereby fingerprint devices replaced attendance registry booklets. This was meant to easily track workers’ attendance and to discourage absenteeism among primary and secondary school teachers as well as weed out ghost workers.This development followed a discovery where about 53.5% of workers were found to exhibit truancy which has cost the education sector greatly.

Within his first year also, Governor Bala Mohammed also flagged off the disbursement of five Hundred Thousand Naira to each of the 1,320 schools in five Local Government Areas of state who are the beneficiaries of the Schools Improvement Project grants, a World Bank project. The Governor without delay provided 6.7 hectares of land for the construction of Northeast UBEC Model School in Bauchi so as to fast track the execution of the project. And with the commitment of the governor towards overcoming the challenges facing the sector, Bauchi State Government secured the award of three million US Dollars for the implementation of Better Education Service Delivery for All, a federal government project.

In the same vein, the Commissioner has given his all to ensure that Students at the “O” level are well equipped and prepared, especially in basic subjects like English Language, Mathematics, Civic education, so much so that they can compete with their counterparts across the country and globe at large. One could outrightly say, had education under the previous regime of Muhammad Abdullahi Abubakar been given such attention it’s being given under Governor Bala, the narrative would have been different. However, with the caliber of people like Dr. Tilde, education, from all indications, will definitely be successful like never before. These are all a testament to the passion and dedication of the Governor to education.

Maijama’a is a student at the Faculty of Communication, Bayero University, Kano.