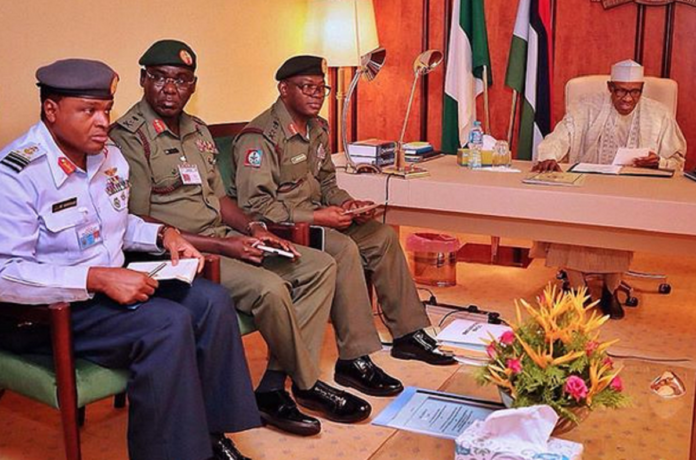 A group of youths from Northern Nigeria under the auspices of  Arewa Youth Consultative Council (AYCC) has threatened a mass protest should President Muhammadu Buhari fails to sack the Minister of Works, Babatunde Raji Fashola and the Service Chiefs.

They expressed anger that Fashola abandoned Federal roads in the North, particularly, the Abuja-Kaduna-Kano express way, which they said has turned to death traps since construction work Commenced on it.

They also poured their venom on Service Chiefs for their inability to stop insecurity in the North, particularly Bolo Haram insurgency and banditry which has claimed thousands of lives in that region.

AYCC National President, Zaid Ayuba Alhaji who addressed journalists at the Aminu Kano Centre for Democratic Research and Training (Mambayya House), on Monday  frowned at the continuous activities of Boko Haram,  kidnappers, bandits, cattle rustlers and armed roberts, despite billions of Naira being earmarked for security.

They further demanded that the Federal Government should crush insecurity, crush Kidnappings and killings of any form in Northern Nigeria.

“This should be accompanied by favorable government policies, more effort to cushion citizens’ hardship and ensure that the ASUU strike is immediately suspended. It is extremely dangerous for youths to be at home for 8 month, that in itself maybe a contributing factor to crime or insecurity.

“As Youth, we demand that the Service Chiefs be changed immediately and  appoint competent younger ones with the required energy, vigor and zeal to curb Insecurity as soon as possible. We appreciate the contribution of the service chiefs over these years, let others come and apply different strategy to attain different result.

“Set up “Antiterrorism/Kidnapping Volunteer Force (ATKVF)” in all the 19 States of the North that will accommodate every active youths in all villages. Passionate volunteers if properly supported by government; will create unimaginable impact in this fight!.

“Approve the uses of proper  weapon by all volunteer force and Civilian JTF including Vigilante, but under the strict training and monitoring of Military and other law enforcement agencies. These Civilian volunteers mostly have ‘special qualities’ that if given weapons shall perform better.

” Encourage intelligence gathering through setting up “Village Intelligence Militias (VIM)” that constitutes basically the locals (Yan’tauri, Maharba, Manoma, Makera, Mahauta). Local people at the grassroot know so much and if engaged adequately in this fight; better result will be realized.

“Compensate all victims of insecurity from 1999 to date. Democracy consider the right to life and peace as the moist sacrosanct pillar. No citizen deserve to suffer or die from all forms of insecurity. Compensation will drastically reduce the high level of poverty and the pains of thousands of families affected by terrorism, most of whom may even support the government to curb the menace.

“Government should immediately engage all stakeholders in the fight against insecurity: Religious clerics,Traditional rulers, Youths leaders, Community elders, Political office holders and Security experts in the 19 Northern states. Let us go beyond community policing, let us engage every capable member of each family and institutions to end Insecurity in Northern Nigeria.

” The Media should be used strategically to honor, encourage, respect and boost the morale of the Military, Police and other law enforcement agents fighting the war against terrorism. It is high time we all start showing much respect to those that always make sacrifices with their lives to save ours.

“The Federal Minister of Works and Housing,  Babatunde Raji Fashola should be removed from that office , he may be taken to a different ministry but not Works and housing.

“All scientific and practical evidence showed the capacity of Julius Berger as a company that have the capacity to finish this work before 2021, but we are painfully forced to wait for 8 full years; despite the incessant kidnappings and deaths of our brothers along that road. This is the most important, economic and value added road in the North, just like the Lagos-Ibadan in the South.

“All forms of sufferings and deaths in Northern Nigeria are violently and completely out of justifiable sense. We urgently demand for the quick implementation of these demands. We call on the Government to lead while every stakeholders follows, while we are calling on every human alive to give the best of contribution towards ending this menace for nobody knows the next victims, ” he added.

.The northern youths further expressed concern that AK47 and other lethal weapons are now carried like mobile phones in the hands of criminal elements in Northern Nigeria. What is our hope and what is the future of our younger ones?

They lamented that armed criminality is gradually having a permanent base in Northern Nigeria as killing of innocent souls is multiplying from Tens to Hundreds.

“Another threat facing us is the “freed convicted terrorists” that were released from prisons as a result of recent protests. Most of them are dangerous criminals, specialists in destruction and crimes against humanity.

“The eight Month long academic strike is adding more to the hardship of our youths and automatically creates rooms for youths’ engagement into unwanted activities. Idleness and falls in educational activities constitute some of the worst threats to the future of Nigeria.

“The prediction of the Chief of Army Staff, Lieutenant General Tukur Buratai, that terrorism and attacks may continue for the next 20 years, this is the greatest shocks of our lives. Does that mean that we are hopeless and futureless or that we should forget about peace, security and stability in our lives for the next 20 years?.

“The Daily Trust report on ‘why it will take 8 More years to complete Abuja-Kano road’ is threatening insult to the people of Northern Nigeria and yet another threat that will continue to create more loss of lives from road accidents, kidnappings and other forms of insecurity, ” Zaid stated.