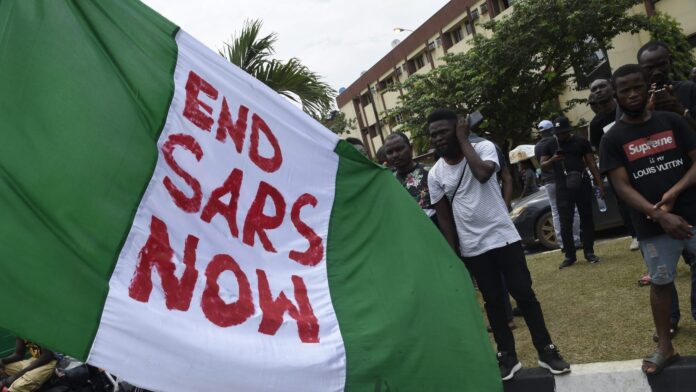 When the #EndSARS protests began in October, 2020, I wrote an article which I criticised the Federal Government for allowing the issue of the disbandment of the Special Anti-Robbery Squad (SARS or FSARS) to drag over the years to a point of degenerating into violent protests across Nigeria that led to loss of lives and property. I made it lucid that if the protests wouldn’t be managed carefully, it would be hijacked by hoodlums and would degenerate into violent protests.

Unfortunately, the protests turned violent and put Nigeria in a conundrum. For those who have an ascetic way of life, refused to participate in such destructive act while others displayed mawkishness in the course of the protests.

When the Inspector-General (IG) of Police, Mohammed Adamu announced the disbandment of SARS on Oct 11, 2020 during a press conference at the Force Headquarters, the Federal Government pleaded with Nigerians to stop the protests and leave the streets. But the protesters repudiated it and said the protests have gone beyond #EndSARS, that they are demanding for more things to be done. Suddenly, a list containing over 20 more demands was made. The protesters insisted that all those demands must be met before they will leave the streets. It was in the course of this, that the protests became violent. If the protesters had stopped the protests after the announcement of SARS’ disbandment, the numerous lives that were lost and property destroyed would have been saved.

Nigeria is a complex country where violent protests have never made things better but worse. Those who are in the illusion that violent protests would transform Nigeria and make it better should understand that such would increase our suffering and evil would still prevail.

The Nigerian Civil War which began on 6 July 1967 and ended on 15 January 1970 was initiated by late Lt. Colonel Odumegwu Ojukwu who wanted Igbo and other southern states to secede from Nigeria and formed the Republic of Biafra. Ojukwu saw the political, economic, ethnic, cultural and religious tensions in Nigeria and wanted to correct that through Biafra but it never worked. In fact, after the Civil War, things became worse than they were before it. Political, economic, ethnic, cultural and religious tensions even increased making Nigerians to suffer more than necessary.

Violent protests can turn into political, ethnic and religious crises. So the aim of such protests will be defeated. Since President Buhari is in APC, a Northerner, a Muslim and a Fulani, the protesters will be divided along political, regional, religious and ethnic lines which will alter the course of the protests.

Violent protests or revolution can never make any significant impact in a country like Nigeria. Our leaders can never resign because of bad leadership and would not be bothered even if the whole country is set ablaze and millions die.

The economy was already bad before the COVID-19 pandemic hit the world including Nigeria. The #EndSARS protests crippled economic activities for many days which led to more inflation resulting to the high cost of goods and services making Nigerians to suffer more.

Embarking on more violent protests would disrupt economic activities which would make things worse for majority of Nigerians. If prices of commodity become very high and the exchange rate of Naira to Dollar is N1000 to $1, the rich can still afford that while the poor which form majority of the protesters will continue suffering.

Shortly after the #EndSARS protest, prices of many commodities and services increased and are still increasing. If more protests continue, they will keep affecting the economy and in the end the poor will continue to suffer and the rich will still be where they are.

According to Emmanuel Oladesu, “Lagos is suffering from self-inflicted wounds. The youths, who are leaders of tomorrow, have demonstrated beyond limits, destroying the fortunes of the state and making the journey to the future more difficult.

“Lagos has been taken backwards, almost to the pre-1999 era by arsonists. It may take some time for the state to recover from the avoidable self-destruction”

Those who are deceived that violent protests or protests generally can make Nigeria a better country are living in the worse illusion known to humanity.